Roblox is a massive platform full of thousands of games. There is literally something for everyone on the platform, with a wide variety of games for you to take on. One specific category we are going to talk about today is fighting games. Fighting games, or action games, on the Roblox platform are quite popular in general.

As Roblox easily allows online multiplayer, fighting games where you can face off against a variety of other players (fighting against them or fighting with them to take on bosses) have always done well. There is a big community feel when everyone is fighting against one sort of monster or when you find yourself exploring a land, getting more XP, and trying to be the best fighter there possibly is. 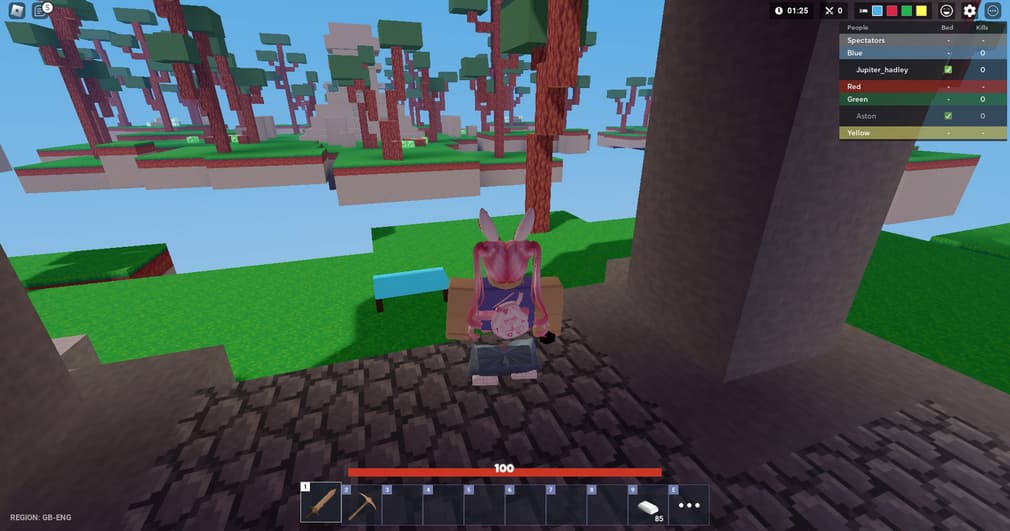 BedWars is a Minecraft-inspired Roblox game where you start on one of four teams. Each team has their own little island, which is a small distance away from the next island in the row, ensuring none of them is connected. You and your team need to quickly start gathering resources to build defences and get better weapons. You see, on your island is your bed - and if someone breaks your bed, your team has lost. You can also die by being attacked and falling off the world. There is a small amount of time until you are respawned, but this can be the difference between your team winning and your team losing! BedWars constantly is updated and has so many different features, bringing it to a higher quality. 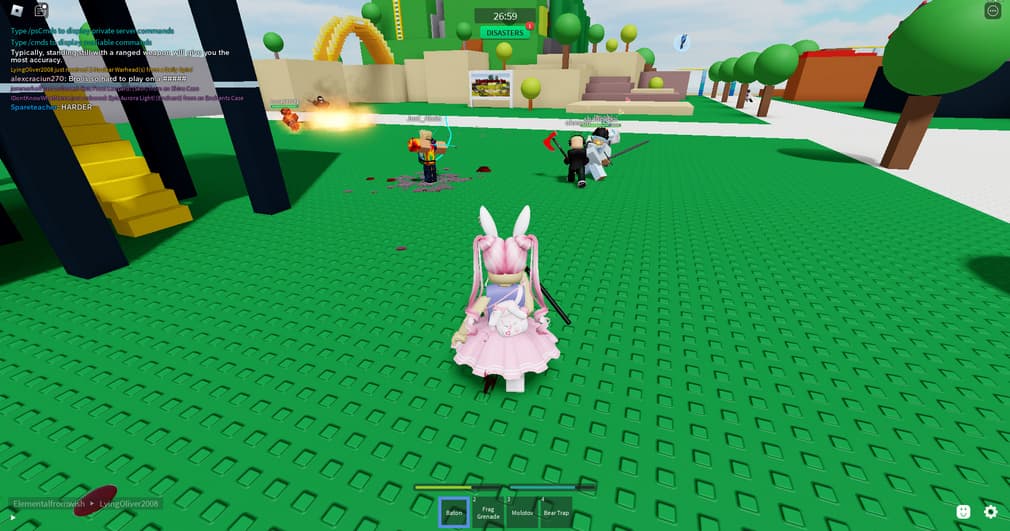 Combat Warriors is one of the more blood-filled fighting games on Roblox. You are spawned into the world with some base weapons to defend yourself. The world is very open, with not a lot of places to hide - so you will need to dive right into the action, hitting people to death, throwing bombs, and running from anyone that might be after you. When it comes to upgrading your weapons, each time you make your way back to the menu of the game, you can go to the shop and purchase new weapons with in-game currency or with Robux. There is also the option to customize yourself and join different clans within the game, which can give you an advantage in the field! 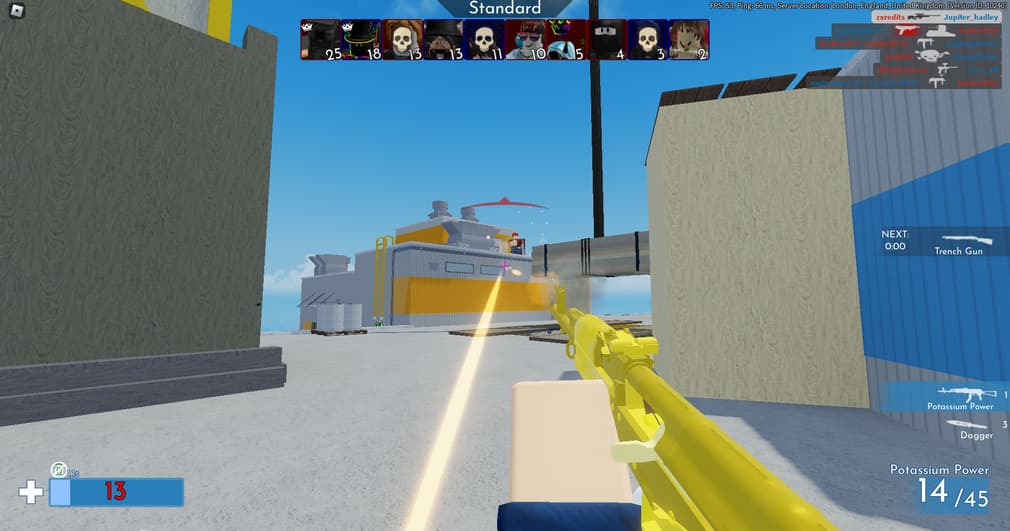 Arsenal is a Roblox shooter, where you start off with a gun in an arena full of other players. You get to choose one of four coloured teams at the start, and cannot hurt those in your team. Instead, you need to run around shooting everyone else on the map while avoiding bullets yourself. Killing the target in each level and breaking their streaks will give you a new weapon to try out and experiment with - which can be fun for you to tinker around with. The gameplay in Arsenal is very quick, with people quickly dying, being shown who killed them, and then jumping right back into the game to play again. It’s a widely popular game within the Roblox community. There are some codes for Arsenal that you can use to claim a bunch of free gifts, so help yourself. 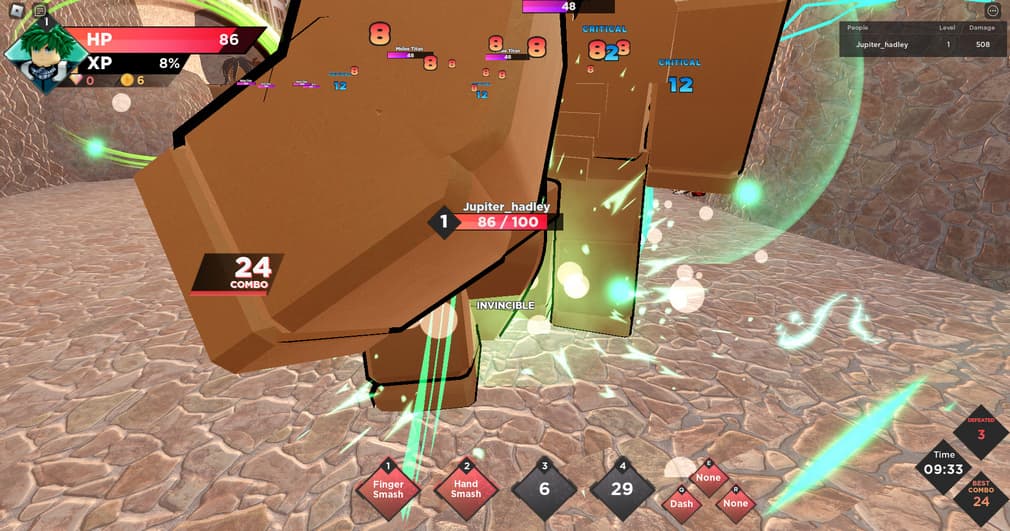 Anime Dimensions Simulator is, obviously, an Anime-styled fighting game that divides everyone up by the experience they have in the game. Starting in the lobby, you can choose your fighter which will give you different abilities when you play the game. From there, you will then be able to select a group to fight with. These groups are based on your rank, so that people who have no experience in the game aren’t placed into a level with massive monsters that will one-shot them. Once you have chosen a level, you can then take on that world. Either with your friends or on your own, you will be fighting against loads of monsters. The various different fighters do have different abilities that cool down over time, and you always have your general attack too. You need to dodge bigger hits, destroy these monsters, and make your way to the end of the area. 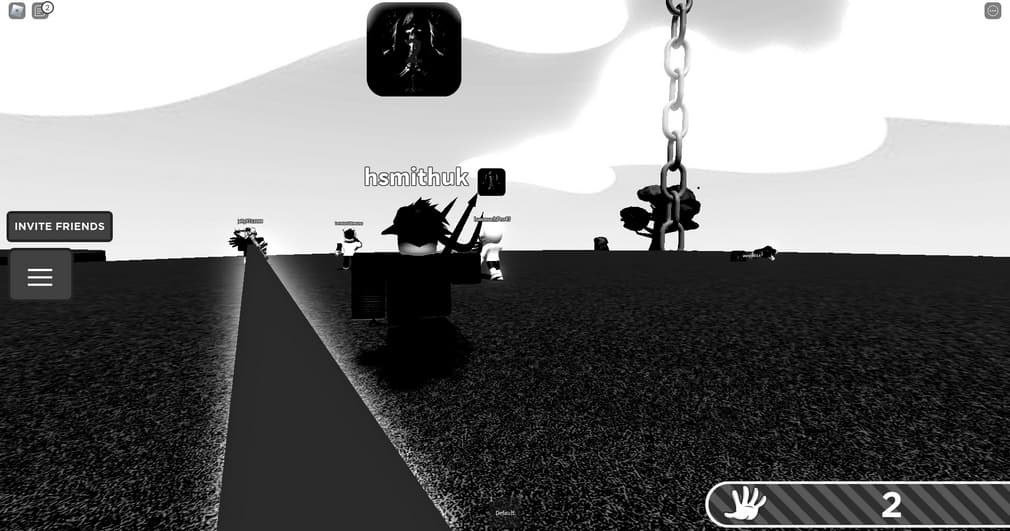 Slap Battles is a game that we talk about often in these lists on Roblox. It’s a very popular fighting game where you only get one weapon: a large hand. You can actually upgrade these hands if you gain more slaps, which you can then take into the world. The world itself is a small island - sometimes connected to other small islands - full of players all with large hands trying to slap each other off and into the air around it. Other hands can help you have a bigger impact with your slap, helping you stay alive in the world. It’s a wacky and quick fighting game about slapping people with a huge hand, and kids have really found it super funny to play again and again. 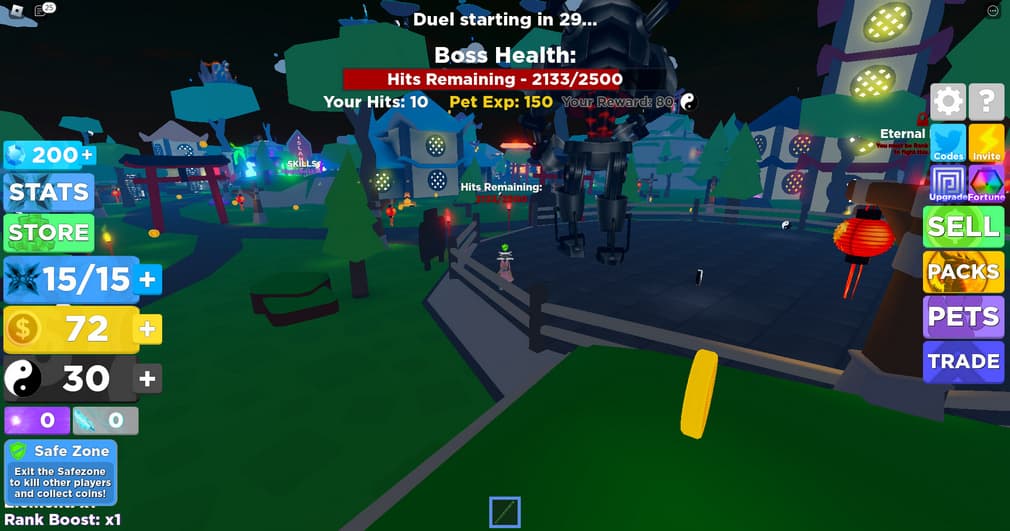 Ninja Legends isn’t just a fighting game, but also is one of those selling and collecting style games that find their way on the Roblox platform. In Ninja Legends, you will spawn in a bright and vibrant world, where you can run around collecting coins and hitting massive monsters that are at different points on the map. After a few hits, you can then teleport to the shop to sell the resources you have gained, which can then be used to purchase better upgrades and weapons. Every few minutes within Ninja Legends, there are also player vs player duels that are opt-in. Everyone on the server can join the duel, and then need to face off against each other as they fight and show off their weapons. Fighting against other players isn’t a must; instead, you can choose to work together against monsters. 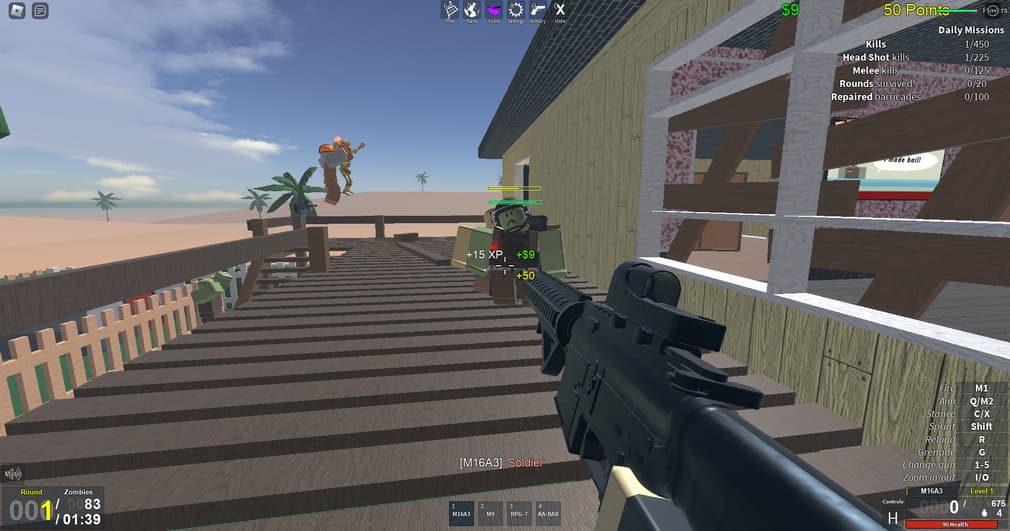 Zombie Uprising is another game where everyone works together to fight off a bunch of monsters - in this case, primarily the undead. In a more realistic world than the other games on this list, you will have a few moments to look around for a good vantage point and find any of the other humans to work together with you. Once the zombies, skeletons and other undead start coming, you will need to fight them off with your weapons. You do have a few to choose from, and can earn in-game money from actually destroying them and collecting items around the world. This money can be used to purchase more weapons so that you can defend yourself better. For those of you that are fans of brain-devouring zombie games on Roblox, you're in for a treat. 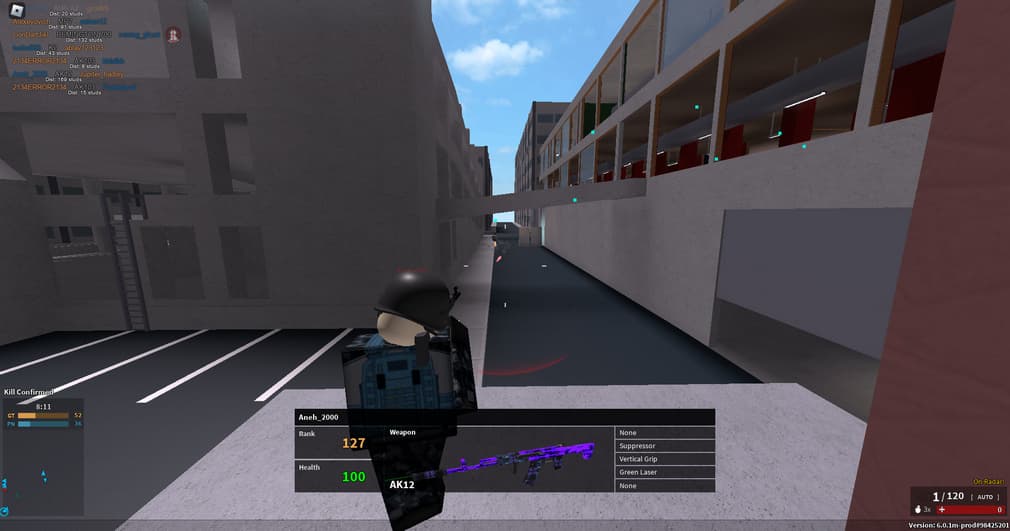 Phantom Forces is a more realistic shooting game where you get a bunch of weapons, spawn into a dark and grim world, and can shoot out anyone on the map with a red X on them. You can only see the other team when they are being attacked by your team, it seems, so keeping an eye on the map can give you direction on where to go. In Phantom Forces, you can loot bodies that are on the ground, find different weapons to master, and work together with your squad so that you can be the dominating team in this world. If you do die, you can quickly get back into the action, making this another fast-paced game! 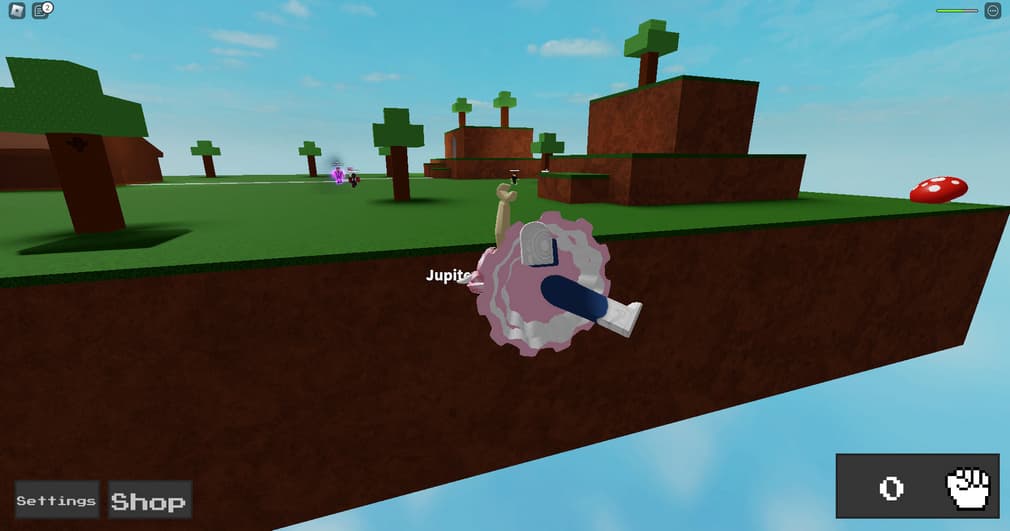 Ability Wars are similar to Slap Battles in the way that your only weapon is your fist, which you can use to hit people out of the island. However, there are a lot of different power-ups within this game and the world itself looks quite different. You can see who is more powerful than you and should be avoided by looking out for any sort of glow coming off of their hands. When you do get hit and whacked into the air, it’s pretty funny to watch yourself swirl around in the air before being taken back to the lobby to try again. There are a few different arenas to unlock if you get good at the game, so you can play against other players of the same level. 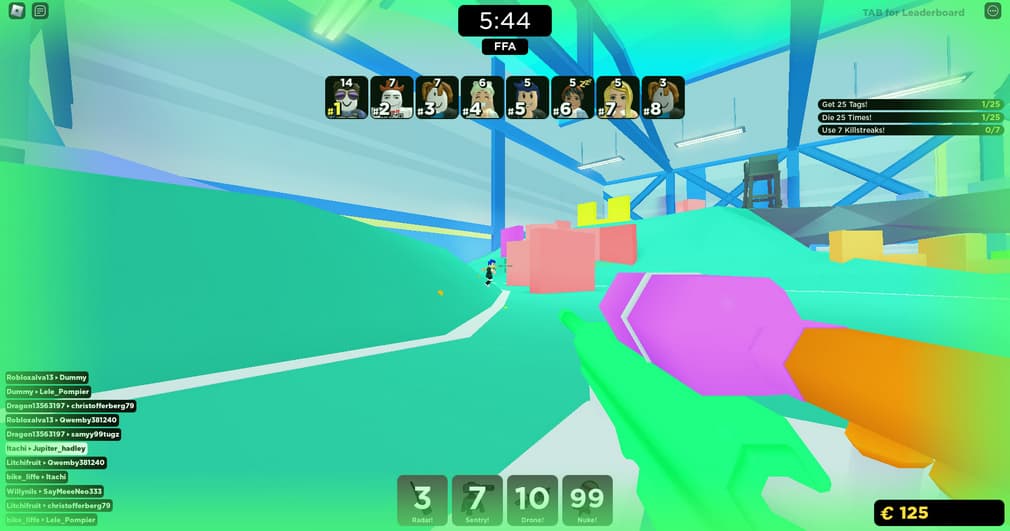 BIG Paintball! is the least realistic fighting game on this list - instead of having realistic graphics, it’s colourful, fun, and full of paintball. Everything is neon, nothing feels like real weapons, and you will find yourself getting hit with coloured bits of paint until you respawn on the main page. You can slowly unlock more paintball guns as well, picking one to use in the round on the menu before joining. It’s a simple game, but more approachable for younger ones who want to play fighting games on Roblox or those who want something a bit more fun and colourful.