Even real superheroes play games on their Android phones

We were pretty convinced that this world deserves the list of best superhero games for Android to help everyone out during these challenging times.

While we’ve been watching Superheroes on television or the big screen all our lives, there was a period in time when the only forms of entertainment to capture our imagination were comic books and radio shows. Superman, one of the most popular superheroes of all times, didn’t get his own video game till well into the late seventies, on the Atari 2600. It was released to coincide with the 1978 film, and met with pretty good reviews at the time, ushering in the age of licensed video game adaptations.

Now, we can’t walk three feet without running into some kind of video game adaptation, some better than others, but everyone is looking to cash in on putting players in the role of super-powered individuals fighting for what’s right. There have also been a couple of different offerings within the last decade that really showcased how an open-world scenario could fit with some of the most famous heroes around, including Batman and Spider-man.

While mobile platforms have not yet been able to capture the grand experience of a blockbuster film that you have control over, there’s still a bunch of great titles that feature nearly every superhero you can think of from both Marvel and DC comic brands. Games featuring these power-packed personas range from tactical RPGs to puzzle games and everything in-between. You can download each of these games on Google Play Store.

Check out our list of the top 10 best superhero games for Android phones and tablets, and let us know if you think we missed your favourite.

Apparently, there’s no such thing as wizards in the Marvel universe, unless you count Pinball Wizards, of course! Flip and bounce your way through over two dozen tables filled with your favourite heroes as you fight famous villains from the Marvel history books. Gameplay is the typical tight, score-chasing play that you’ve come to expect from the experts at Zen Studios. This is not a game that you'd expect when you are talking about the best superhero games on Android, but it certainly deserves its place on the list.

This award-winning series lets you solve crimes like Batman. Talk to interesting characters, find clues, and make tough choices in this adventure where every decision can impact the dark and twisted story. The first episode is free, with the other episodes purchasable in-app, allowing you to try it before you buy into this world of bats and baddies.

Recruit over 200 Marvel Super Heroes and Villains to complete missions to stop the convergence from destroying the world. Level up your characters to make them even stronger, kit them out in your favourite uniforms from their comic or movie history, and send them off to defend the Earth in story mode missions that reveal new stories never before told. You can even battle other players in PvP Arena modes and prove you have the best team in the Marvel Universe.

Since their rooster is so vast, our Marvel Future Fight tier list of best heroes that you should pick will certainly come in handy, especially if you're a new player.

Remember the Power Rangers? This title features all your favourite Rangers in a battle against virtual monsters and clones created by Rita Repulsa herself. Fans or newcomers will love this fighting game with tons of action and over-the-top battles, including fighting with the Megazords themselves.

In this fighting game, you’ll pick your favourite Marvel superhero or supervillain and battle against combatants in fierce battles. With over 190 different characters to pick and modes including a story mode and 1-vs-1 battles, you’ll always have an epic showdown at your fingertips. One of the oldest superhero games on Android that still holds its ground.

Battle it out with your favorite DC Superheroes and villains in this epic fighting game. You collect cards, level them up, and send them off to battle foes. There’s a full story mode with console-grade cinematics and plenty of fights to keep you busy, with combos and dynamic battles in several modes of dynamic 3-vs-3 battles.

Build your next superhero adventure brick-by-brick in the excellent LEGO version of Marvel’s comic video game series. This silly action-game will have you engaged with your favorite characters as they take to the scene in exciting and hilarious ways, battling baddies and solving puzzles. The impressive roster lends to unique ways to tackle foes and there’s always a surprise around each corner.

In this strategy role-playing game, you’ll team up with some of your favorite DC heroes and villains to fight across iconic locations versus other teams of four. Rank up your team members to increase their powers and experience a dynamic story that brings epic battles to your mobile screen. Plenty of weekly events and challenges keep the brawls exciting and fresh!

Collect your favorite heroes and vilest villains and match gems to battle the evil H.A.M.M.E.R. organization’s fiercest foes in Marvel Puzzle Quest. This game takes the classic match-3 formula that made the series so successful and teams you up with more than 230 of your favorite Marvel characters to do battle in this puzzle RPG and new characters adding all the time.

For the ninja in all of us, this explosively action-packed battler pits your pizza-loving pals against the evil forces of Kraang’s army. Featuring 5-vs-5 battles against your favourite TMNT characters and over 70 stages to complete, there’s a lot of turtle power to go around! You can collect and power up over 30 characters from the show and train them to make the raddest team on this side of the sewers. 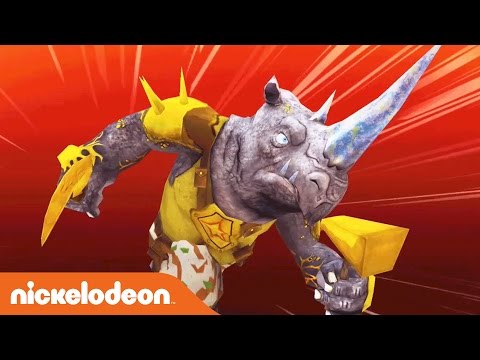 Did we miss your favourite superhero game for Android? Let us know in the comments below!