Exclusive: iPhone 3GS to get enhanced version of Worms

We've already marvelled as Team17 explained how it took the PS3 version of Worms and tweaked it to run on the iPhone, but the developer is just as enamoured with the powerful hardware update, the 3GS, as everyone else - and is ready to take full advantage.

Where the iPhone version has been slimmed down is in the graphical subtleties. The PS3 offered so much processing power that the development team thought they might as well go a bit mad when it came to adding particle effects, shaders and special effects, which took an unacceptable toll on the iPhone's gameplay.

The iPhone 3GS is quite capable, however, and Team17 tells us it's planning on supporting the upgraded handset in a future update.

"The 3GS has shader support, so we wanted to throw in a few bells and whistles for the 3GS crowd," explains lead programmer Matt Bishop.

We've seen today that Team17 isn't the only developer out there that sees the added potential of the iPhone 3GS as a gaming device, after Firemint showed off a 40-player version of Real Racing.

But the Australian software house has raised concerns over how a 3GS version would be administered, which isn't particularly something Team17 is worried about. Any enhancements for the newer model iPhone will be built into the ordinary version and simply detect the model and run the enhancements accordingly - much as it already does by disabling vibration when the game is run on the iPod touch.

"As Matt says, we're going to add a few shiny bits and bats for the 3GS, will refractive water, shaders, and more in the background - we'll make it a bit snazzier," laughs producer Kelvin Aston.

Worms was submitted to the App Store yesterday, and is expected to land around mid-July at the £2.99 price range. 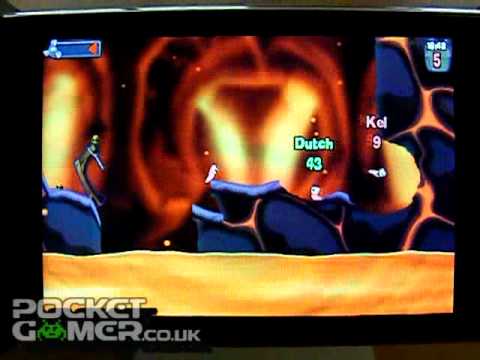