We bet you have probably heard of Creatures of Sonaria if you're a fan of Roblox games. The place has become very popular, and the reason for its popularity is simple. The place can be considered perfect in all basic parameters: idea, design, and gameplay.

Creatures of Sonaria throws the player into a fantasy world with mythical creatures, most of which are harmless to the environment. But these mysterious creatures include some bloodthirsty predators who seek to kill you.

We have creatures ranked based on their highest potential. The information provided in this guide is for guidance only and in no way restricts the player's choice. And after you finish scrolling the tier list, make sure to check our list of the best Roblox adventure games. Original article by Alina Novichenko, updated by Pocket Gamer Staff.
Click Here To View The List »

At the very top of the Creatures of Sonaria tier list, you can find the most powerful creatures with practically no weaknesses. They take less time to train, as they are less demanding in terms of equipment. 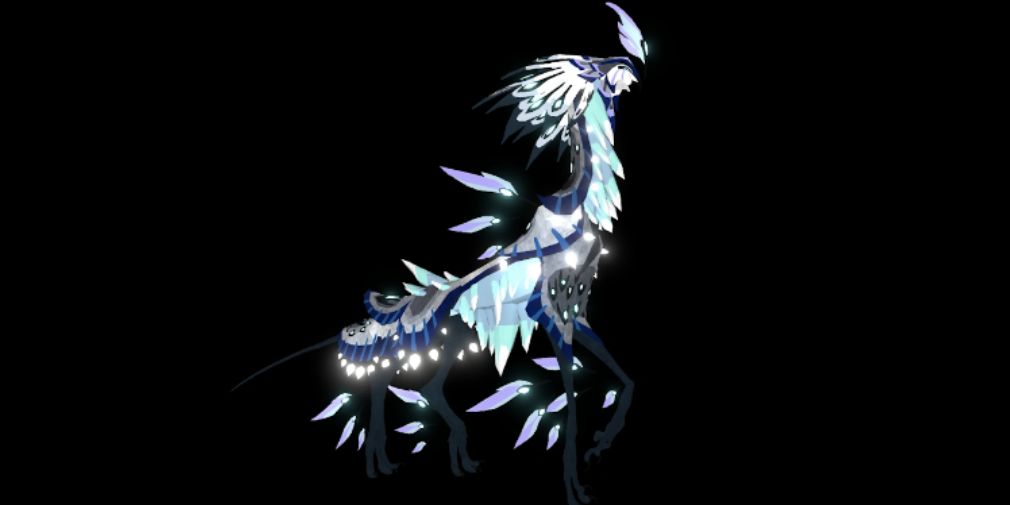 The Boreal Warden is a terrestrial herbivore creature that was once available during Winter Events 2021-2022. The creature itself is mysterious and rare, which is very hard to find in Sonaria. These giants are rather passive, helping neighbouring herbivores who are looking for protection. 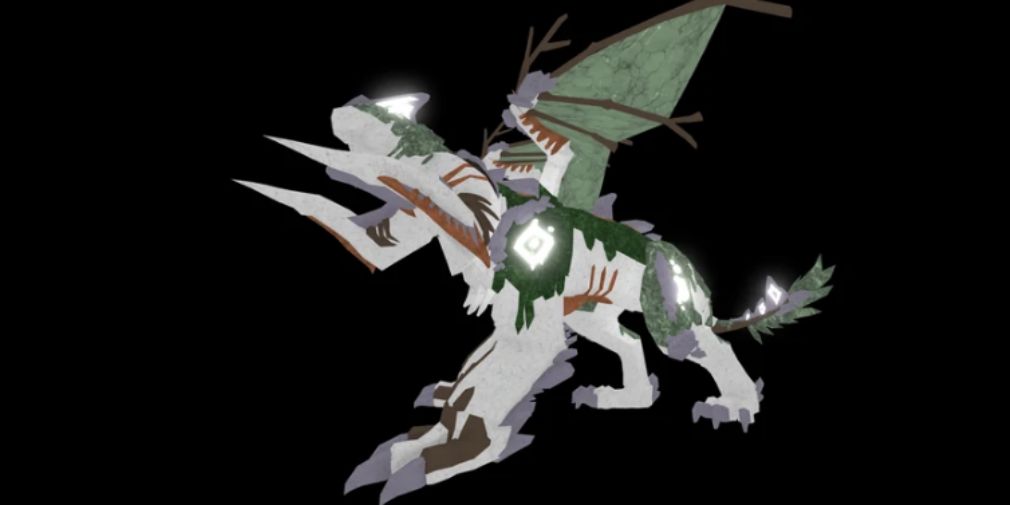 Gramoss is a terrestrial herbivore. This species is available in the Herbivore gacha. Gramoss is an obedient and sociable herbivore, capable of empathizing with other creatures. The creatures can often be seen sheltering small creatures under their bodies as they graze in search of food. Gramoss's body shape is similar to that of Koryser. It has small wings, which it is unable to use for flight. Its design and name may be a reference to gargoyles covered in moss. 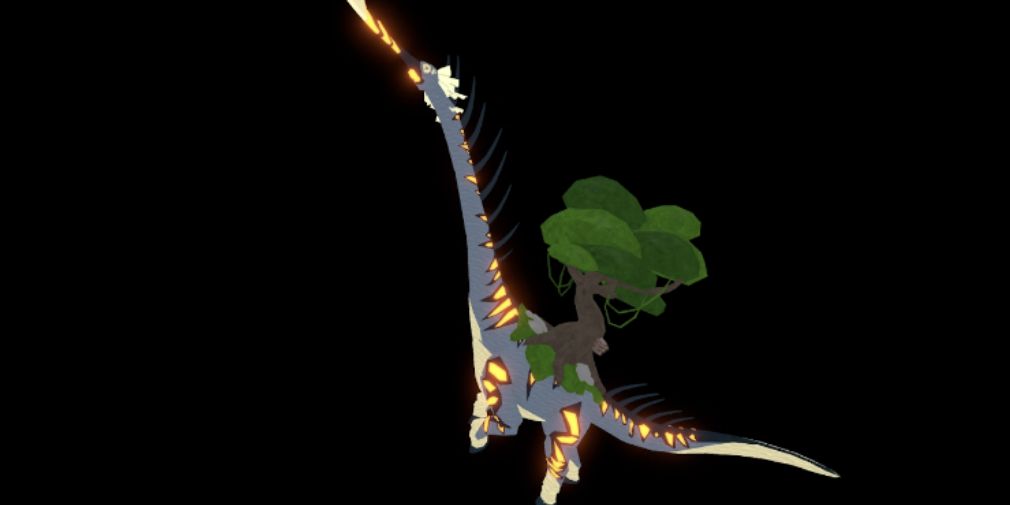 Lmakosauruodon is an herbivore that lives on the ground. You can obtain it in the Herbivore Gacha. It looks like a sauropod dinosaur. It has a beetle-like crest on the end of its nose and many spines on its neck. Its colours are turquoise, brown, and yellow.

The creatures on this list are very strong and have one incredibly strong or several strong sides. 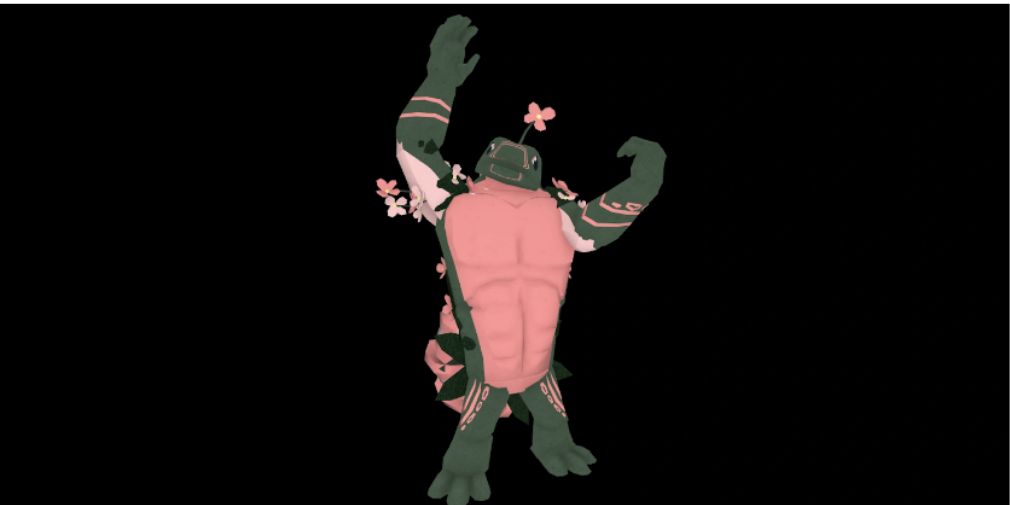 Buff Eulopii is a terrestrial herbivore. This species is no longer available in Gacha. However, it could've been obtained during the Easter Event 2021 event by fighting the Buff Eulopii boss.

It was later returned during the Easter Event 2022 as a random drop from the Scrambler boss.

Buff Eulopii is similar to Eulopii. The main differences between the two are that the Eulopii Buff looks larger, bipedal, more muscular, and has a broad torso and abs. 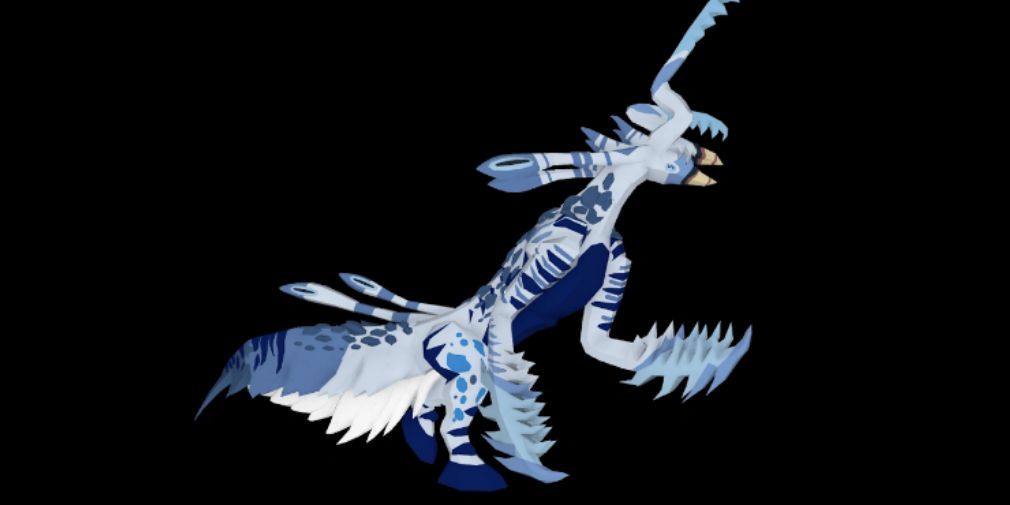 This is a terrestrial herbivore. This species is available in the Herbivore Gacha. These tall beauties are friendly creatures. If they ally with other herbivores, they take good care of the animal's life. Their horns reach the foliage high up on the trees, thus making noise. This helps to scare away any living creatures in the trees so that other creatures will not eat them. 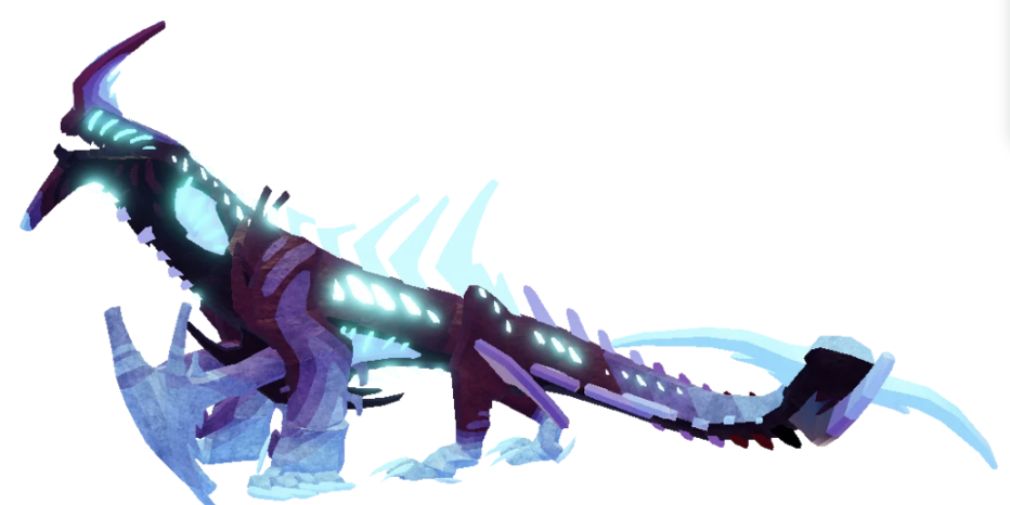 Sana'ata is a terrestrial carnivore. The species is only available in the Rotation Store. When it comes to Sana'ata, they are spoken of as slow and very bulky creatures, found mostly near minerals or caves. They have pickaxe-like limbs over their shoulders, as well as a pickaxe-like outgrowth on the end of their tail. These are used for both combat and mining.

In this section of the Creatures of Sonaria tier list, we have the creatures that are a great option for a newbie. Most of these have special abilities. 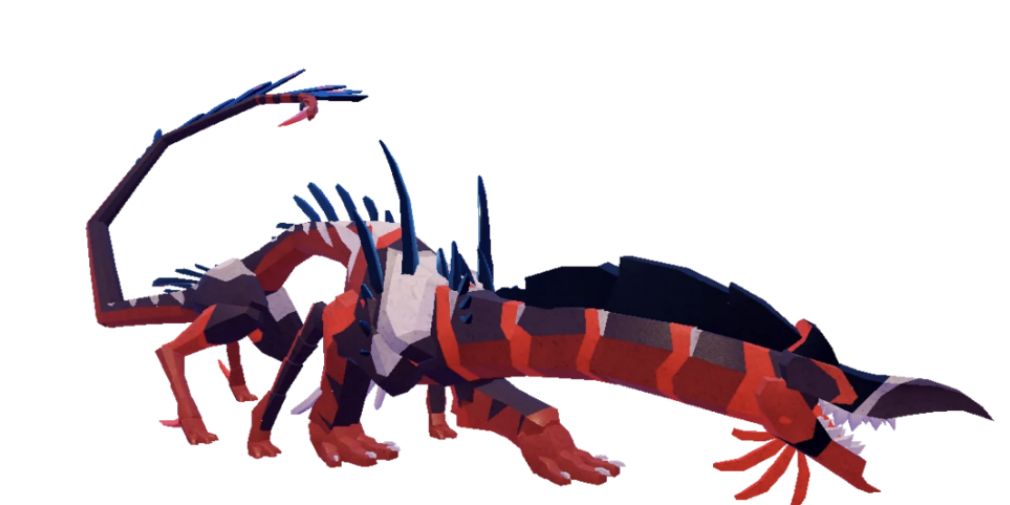 Knalriki is a terrestrial omnivore. The species is available in the Session Gacha. Since knalriks are small, they are very nimble creatures that are very fond of food. They can often be found gathering around carcasses in the hope of getting full.

Knalriks are long-limbed creatures with spines running along parts of their bodies and scorpion-like barbs on the end of their long, thin tails. Their heads are slender and converge to a point, though they have no eyes and have numerous teeth that protrude from their mouths even when closed. 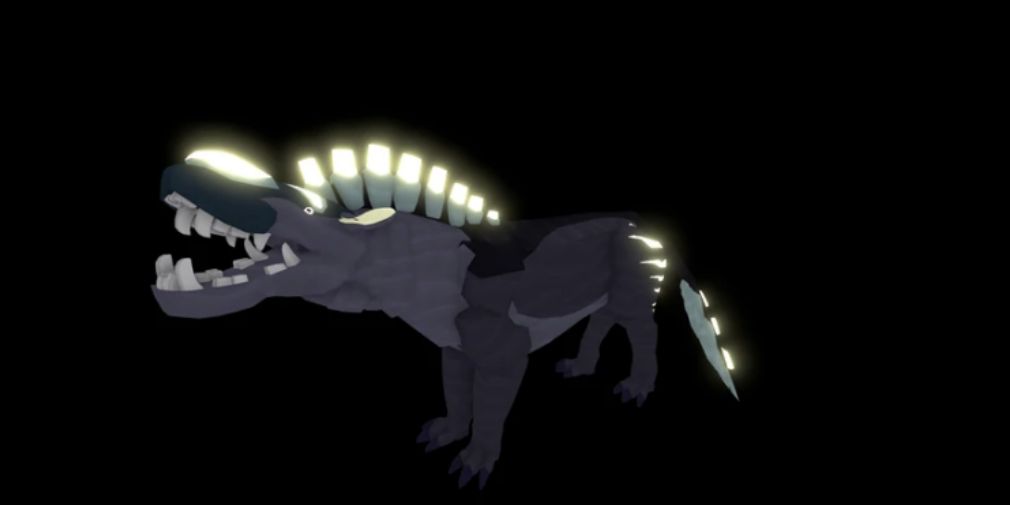 The Therolachus is a semi-aquatic herbivore. The species is available in the Herbivores Gacha and Semi-Aquatic Gacha. Therolachus resembles a hippopotamus with slender legs. Behavior-wise, the Therolachus is similar to a rhinoceros or hippopotamus. They live in groups of up to 10 to 12 individuals, usually led by the alpha male. They are effective both on land and in water. If you are suddenly chased by this creature, do not worry that it will follow you for a long time as they do not charge beyond their territory.

B tier includes simple creatures that can help in battles but spend a lot more user time and effort to do so. As with the A tier, it may take longer for a creature to become stronger. 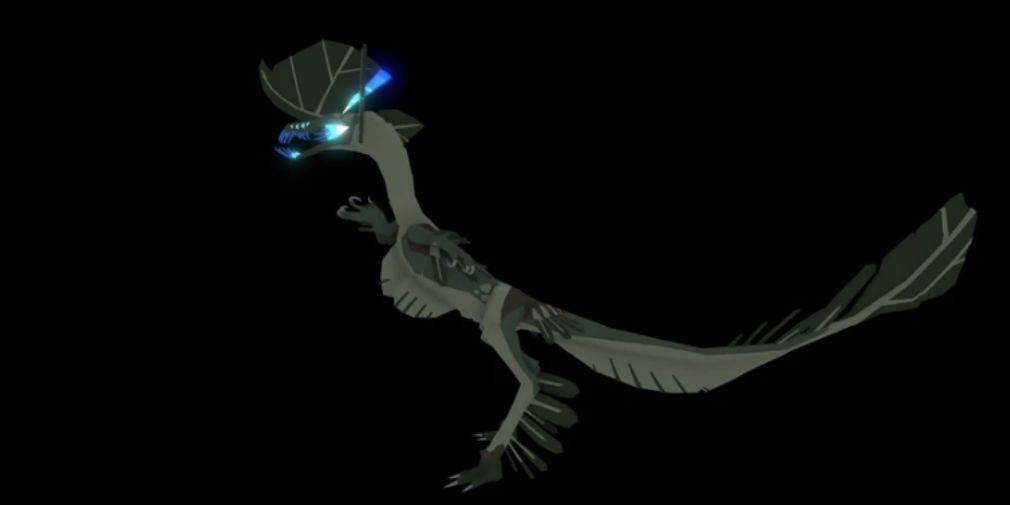 Dioctrine is a terrestrial photocarnivore. This species has been obtained in a Limited Gacha but is no longer available in any Gacha. The Dioctrine is a green theropod with features similar to the dinosaur Dilophosaurus, featuring foliage ruffles and a head crest with a bright blue underside. These beasts are always hungry and searching for food. They are nimble, fast, and intelligent. But despite the above information, the creature is weak and unlikely to be able to help the player.

These creatures will have to be given maximum attention if you want to get great combat performance out of them. It's best to limit using them until the best creatures fall out. 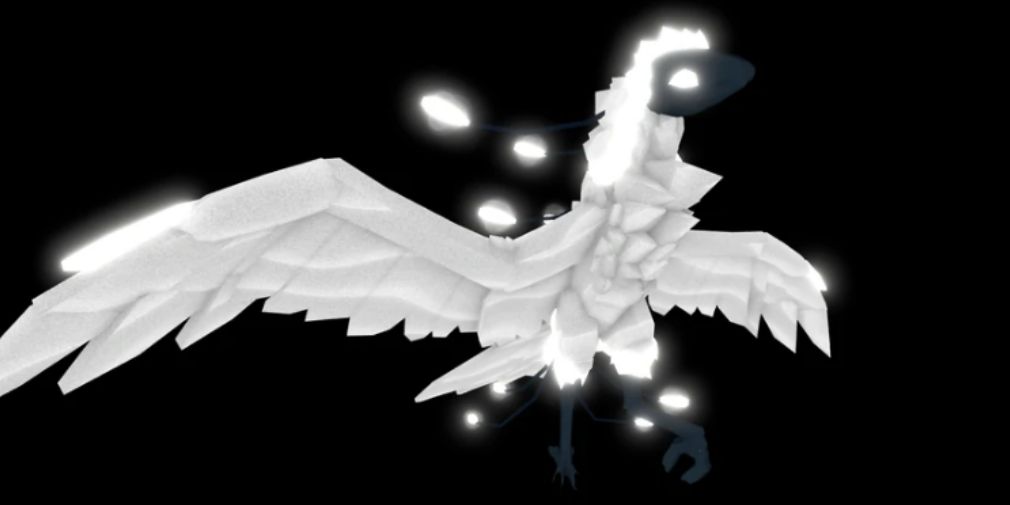 Pero is a flying omnivore. The species is available in the Omnivores Gacha and Sky Gacha. The Pero has a bird-like body form with a tiny beak-less face. There are two rows of glowing lights on its neck and tail, for a total of eight lamps. Pero is a feathered bird with remarkable flight ability. As Pero grows, they have light bulbs that let them assume an invisible condition and hide from predators.

This tier list is not a panacea. A properly grown and used C-tier creature can be just as effective as an S-tier one in a number of situations. We hope you found the Creatures of Sonaria tier list useful and that you can now start training those at the top. We have covered a lot of different Roblox titles, so you can also find Anime Dimensions Simulator tier list, Anime Warriors tier list, My Hero Ultra Impact tier list and a reroll guide for most of them.
0/5
Next Up :
Infinite Magic Raid tier list - The best characters ranked

How to trade in Roblox?