You are probably a huge fan of the franchise, much like us! The blue button below will lead you to the list of best Pokemon games for mobile on both Android and iOS devices!

It used to be that the only thing you could find on mobile app stores in relation to Pokemon were apps that had walkthroughs or a Pokedex app with information about all the pocket monsters in great detail. Thankfully, those days are past us, and Nintendo and Game Freak brought the catching and caring for these lovable creatures into our hands, literally.

Sure, we’ve been chucking Pokeballs on portable devices for decades now, but with the advancement of portable technology and the widespread adoption of capable smartphones, our interaction with Pokemon, and each other as fans, has never been so widespread.

There are new, innovative games, titles that show off impressive Augmented Reality tech, and everything in-between. Nintendo has always been very protective of only releasing its games on its hardware, especially first-party titles, but we are lucky that we live in an age where that is no longer the case. It used to be that the best you could play on a mobile device would be loading up a ROM of your favourite title on an emulator. Now, we have an entire library of excellent Pokemon games for mobile to load up any time we need our fix.

The following list of apps is what we think are the top 10 best that you can install on your iPhone or Android device today.

When this innovative Augmented Reality title was first released in 2016, it was a mega-hit. People who even vaguely remembered Pokemon were flocking in droves to historical landmarks in order to score some free Pokeballs, and taking to their malls and other iconic spots to participate in fierce Gym battles.

With the recent fixes to the app to ensure playability from home or near it and the addition of trading and gifting with friends, there’s never been a better time to Go catch Pokemon. It might still be one of the best Pokemon Games for mobile.

If you’re looking to catch some of the latest cards from the card game without breaking the bank, the Pokemon TCG Online app could a good option for you. This free-to-play app is only available for Tablets, but it offers the same dynamic gameplay from the card game without the hassle of setup. You can earn cards through gameplay, as a login bonus, or purchase packs in an actual retail store, which will come with a code to add those cards digitally to your account.

The game also has a unique trading system where you can trade extra cards for the one you’re looking for, but there are no guarantees there. There are no ads anywhere in the app, making it a great way to learn the game before you sit down to play the paper version, too! Test it out yourself, and you'll realise why is it amongst the best mobile Pokemon games.

In Pokemon Masters EX, you team up with other trainers to compete in three vs three battles with all of your characters at one time. The trainers you’ll be teaming up with are famous ones from past games in the franchise, and you’ll also be able to play co-op with friends in multiplayer or enjoy PvP.

Introduced in Pokemon Masters EX is the ability for trainers to use their own moves and items in battle, something that will surely assist your Pokemon while duking it out. There’s a full story to play through and plenty of special events with limited-time characters. It's one of the mobile Pokemon games that keep you entertained every time you load up.

Fulfil orders as you serve up tasty treats to customers in Pokemon Cafe Mix. Your staff can use their special ‘Cafe Skills’ to help clear the puzzles on-screen and as your menu grows, you’ll get additional recipes and ingredients.

The game has you juggling attaining new characters to help you on your staff along with additional complexities to what you’ll be serving up as you dive further in the game. The delicious-looking items are all Pokemon-themed, so it’s a treat when you’re making them and serving them up to see what other kinds of concoctions are out there for you to create. It's certainly one of the most interesting Pokemon games for mobile, especially if you are a fan of sims!

Read the full review | Download the game from App Store

If you ever wondered what would happen if you took one of Pokemon’s most iconically weak characters and give them their own game, then Pokemon: Magikarp Jump may just be your answer. Train your Magikarp to jump as high as possible, but if it loses a match, it retires.

You then begin the process over with another Magikarp, but with slightly better stats. It has roguelike properties, flopping fish, and can sometimes be downright hilarious. Participate in tournaments and take photos of your fish, and make the biggest ‘splash’ in Pokemon: Magikarp Jump! It might sound like there are many mobile Pokemon games for Android and iOS that are more interesting, but give it a shot! Or should we say, splash?

We believe that this could be the right one for you in case you are rummaging through our mobile Pokemon games list in search of an RPG! The Pocket Monsters meet Cubism in the action RPG, Pokemon Quest. As you head out in search of treasure with your cube-shaped pals, you’ll come across wild Pokemon that are standing in your way from those precious goodies.

Simple controls allow you to quickly battle through the level, and you can take your team of up to three characters to assist you in clearing each area. Once an area is clear, you can rest your creatures, customize them, or bake treats made from ingredients found on your playthroughs to encourage new Pokemon to join you.

In this unique puzzle game, you move Pokemon around the screen to make matches and create combos to lower the HP of the wild ones you’re facing against. Once their HP is low enough, you tap a Pokeball to throw at them and catch them, with the more combos you completed and moves left over during the match, the better a chance of catching it.

Use your captured characters in additional puzzles to give you an elemental advantage over whichever Pokemon you’re facing. There’s no time limit to each puzzle, so it overall makes for a fairly relaxing experience that is fun and intuitive.

While this may be an odd one to include on this list, it’s a great tool for kids to encourage healthy practices and Pokemon Smile can certainly be used by adults, too. In this AR game, you place the phone somewhere the player can see it and brush along as a Pokemon appears on the screen to attack bacteria that appear on their teeth.

When you’re done brushing, you catch the character and add it to your collection. You can earn Pokemon Caps to wear on your head while brushing, and stickers to add to camera snaps of your plaque-busting skills, which add to the fun.

Geared towards younger players but still a great distraction for the young at heart, Pokemon Playhouse is filled with Pokemon-related activities. There are eight different attractions for you to engage in, including grooming, reading stories, and a music tool that uses Pokemon to sing out musical notes.

You need to keep track and take care of a Pokemon Egg that you’re given and do so by completing activities. Eventually, the egg will hatch, revealing a new character for you to collect. There are over fifty Pokemon that you can befriend. 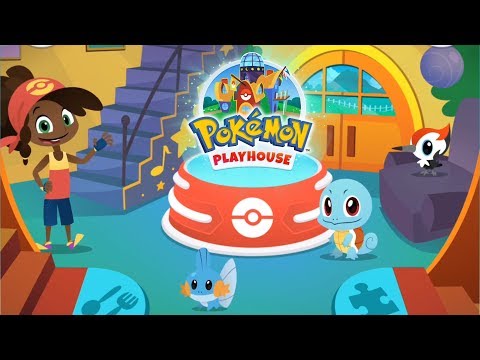 Available on: iOS + Android
Find out more about Pokemon Home

Not necessarily a game, but meant as a companion app for the console and portable Pokemon games for mobile,Pokemon Home lets you bring your collection with you. Any character that has come out for a core Pokemon game can be transferred to the app, and you can keep track of what you have and work on completing the National Pokedex.

In the app, you can even trade with other players using the Wonder Box or GTS at any time, making it even more convenient than having to process trades through the game itself. You can also receive gifts, manage your friends, and complete challenges.