Looking for the very best one? Check out our Pokémon Unite tier list!

Pokémon Unite is a MOBA that has been released on Switch earlier this year and on mobile in September. If you are looking for a Pokémon Unite tier list, then you have come to the right place.

In this article, we have tried to rank every available Pokémon in the game based on its abilities, stats, and how easy it is to use. So if you are unsure which one you should choose, refer to this tier list to pick the best one.

The game has five different character roles: Attacker, Defender, Speedster, All-Rounder & Support. Therefore, we have divided our Pokémon Unite tier list into five parts, listing the best one role-wise. You can learn more about the roles by going through our Pokémon Unite beginner's guide. 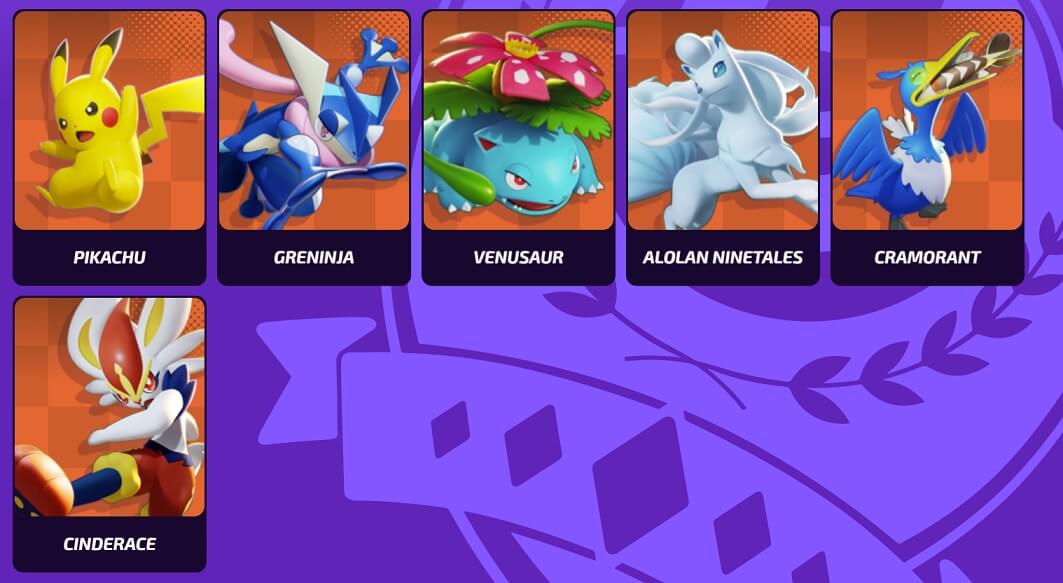 Attacker Pokémon have low health but are capable of dealing massive damage to their opponents. It is a fun role to play and is very crucial at the same time, especially in the early game. As an attacker, you handle the top lane alongside a defender. It would be best if you always tried to pick up some early kills as an attacker. In the late game, try to stay behind your teammates and deal damage to the enemy. Here are our best picks for an attacker Pokémon:

Sylveon - For a ranged Attacker, Sylveon is not among the squishiest. It can scale well and if the teammates know how to work around it and set up the battlefield, Sylveon can easily roll all the damage needed to finish off the entire enemy team. Cinderace - As a ranged Attacker, Cinderace is a great carry especially after building a couple of items. Mew - A highly agile character that can perform really well in many scenarios. It doesn't have the highest flat attack in the game, but it can engage and disengage at will and makes for a great jungler. Greninja - Greninja is a top-tier jungler who can sneak up on enemies using stealth, and when combined with its powerful kit and high attack damage, it will be an asset to any team. Glaceon - Is a powerful Attacker who can be played by beginners as well, with a little bit of practice. Its passive ability that prevents crowd control can be crucial towards evading a sneak attack. Gardevoir - Gardevoir is a top-tier attacker who can deal high AoE damage, as well as some crowd control in the form of stun and slow. Their kit is heavily reliant on the player's skill, therefore is not the easiest unit to play as a beginner. Delphox - Delphox is one of the best team-fighting Pokemon, who excels in the late game (especially in late-game team fights). It has a fairly weak early game, therefore it's crucial to learn how to play it well in order to get to that late-game power spike.

The speedster is the most fun role to play. You get a crazy movement speed, so use it to dart around the map and help your teammate both in the top lane and the bottom. As a speedster, you are responsible for clearing out the jungle and setting up ambushes. A word of advice will be to avoid going first in the team fight, or you will find yourself in the base after a cooldown time. Here are our best picks for speedster Pokémon:

Dodrio - As a Speedster, Dodrio has very high movement speed and the play style is not for everyone. The Tri Attack is key for scoring multiple kills if used correctly, and that makes it a powerful, top-tier unit. Gengar - While Gengar doesn't have the best survivability, it does amazingly in single-target encounters if you manage to get past its fairly weak early game.

The role is pretty self-explanatory. You go down to the bottom lane alongside the supporter Pokémon. You try to get the kill as well as score points, while the supporter will help you achieve your objective. Just make sure you don't overextend in the early game. Here are our best picks for all-rounder Pokémon:

Tsareena - While her durability is not that good, she does have great sustain and can evolve quite early compared to other Pokemon. She has good damage and disables, so she can be a top-tier jungler for many players. Scizor - Since Scizor can be played in two different ways depending on the team's needs, it can be a great unit for any lane and any player, since it's also fairly easy to learn how to play him. Machamp - The ability to ignore negative effects and powerful engagement skills, make Machamp a great unit to for most team fights. However, it is a little bit challenging getting past its weak early game. Lucario - While Lucario is not a great unit for beginners, it is a champion worth investing the time to learn and master because it can be played in any lane and has amazing mobility and damage. Azumarill - With a great UNITE move that can charge relatively fast, as well as great 1v1 capabilities, Azumarill can be a force to be reckoned with. It's a great Jungler that can also help secure objectives, and can be used for split pushing better than team battles. Urshifu - An All-Rounder who can take on pretty much anyone in 1v1 fights, since it has good sustain and damage. It can also provide a good engage for team fights, as well as some decent crowd control.

As the name itself suggests, as a defender Pokémon your job is to protect your team. You will go head-on into the team fight and absorb all the damage. This is why defenders have high endurance. Here are our best picks for the defender role:

Snorlax - As you might expect, Snorlax is a tank that can provide decent crowd control and surprisingly good damage. Slowbro - For a Defender, Slowbro is not the tankiest unit out there. It also doesn't shine damage-wise, but it has amazing skills that can provide support to allies and if the team doesn't need a dedicated engage/tank, he can be a great addition to the team. Greedent - If the team needs a reliable tank, Greedent is among the best picks. It has some burst damage, as well as great tanking potential. Mamoswine - Another great tank, but not nearly as good as Greedent. It needs a lot more time to become that first line of defense for the team, but its skills offer amazing crowd control, which makes Mamoswine a good overall unit.

Support role might seem boring to play, but a good support player can make the difference between a win and a loss. Support players' job is to protect their teammates, provide buffs, healing, etc. Here are our best picks for the Supporter role

Mr. Mime - With relatively good defensive abilities and an outstanding kit, a good Mr. Mime player can make or break the game. He does rely on his teammates to reach his full potential. Eldegoss - One of the best healers in the game, has a very big range and powerful buffs, such as increased movement speed, which can impact allies in a good way (if positioned right). Sableye - Sableye is the best support in the game at the moment, since its kit provides crowd control and can also take enemies by surprise, offering great engage opportunities for teammates. Blissey - Blissey is an absolutely outstanding Support for beginners, as well as experienced players. Thanks to its high default HP and amazing kit that offers healing and disruption, it is great for both the laning phase and team fights.

With that, we come to our end of the Pokémon Unite tier list. We will update it when balance updates happen, or new Pokémon are added to the game.

0/5
Next Up :
Hero Cantare tier list - The best heroes ranked

Pokemon Unite is concluding 2022 with the launch of Dragapult