Publisher Level Infinite and developer Hotta Studio have officially opened global pre-registration for Tower of Fantasy, the upcoming open-world RPG on iOS, Android and Steam. Players who sign up can not only get first dibs on the game as soon as it launches in the third quarter of 2022, but they can also score special milestone rewards on release day.

In Tower of Fantasy, players can expect to immerse themselves in a lush anime-inspired planet called Aida. The sci-fi action game will give away pre-registration rewards such as Astra Frame x1, Black Nucleus X2, Wholegrain Bread X10 and Gold x2888 for 500,000 sign-ups, while Limited Title x1, Black Nucleus X3, Fried Chicken X10 and Weapon Battery III X4 will be up for grabs when sign-ups reach a million players. 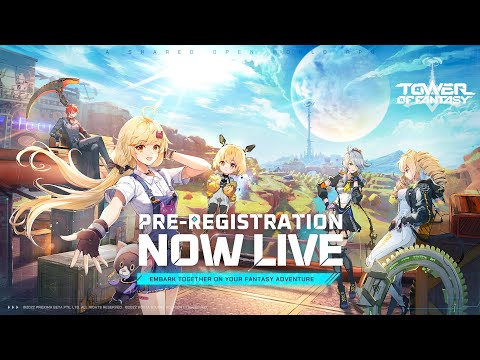 Additionally, Outfit: Star Sand X1, Gold Nucleus X4, Nut Tea X10 and Gold X6888 will be given away when 2.5 million players sign up for the game.

if you're eager to know more about Tower of Fantasy and are curious about giving it a go, you can take a peek at the game on the iOS App Store and on the Google Play Store for Android devices. It's a free-to-play game with in-app purchases. You can also visit the official website to stay updated on all the latest developments, join the community of followers on Twitter, or have a look at the embedded clip above to get a feel of the game's visuals and gameplay.

Are you on the hunt for more similar titles that will put your skills to the test on your mobile devices? Why not take a gander at our list of the best Android MMOs?

Next Up :
World of Tanks Blitz celebrates birthday bash with special rewards and a celebrity guest