A new character has also been added to mark the occasion

Netmarble's popular RPG The Seven Deadly Sins: Grand Cross is set to celebrate its one-year anniversary. To commemorate the occasion, there will be a special two-month event that will apparently benefit active and returning players alike.

It's called The One Festival and sees the addition of SSR [Invincible Avatar] 'The One' Escanor, who will be available via The One Festival Drawn. They are one of the most powerful characters to appear in The Seven Deadly Sins, which is reflected in their abilities here. 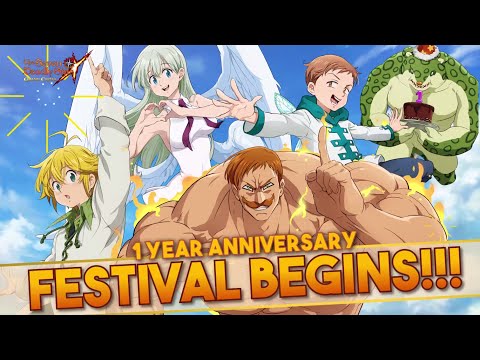 They possess an effect that increases all stats by 6% at the start of an allied turn and cancels debuff effects when a player's three effect is lost before granting debuff immunity for one turn. Meanwhile, their ultimate move can inflict 864% extra damage to a single enemy.

There will also be a series of other in-game events and updates including The One Festival Special Mission. Players who complete six missions during the festival period will earn numerous awards such as "Sunshine" Holy Knight Escanor, [Collector] Great Mage Merlin, [Kungfu Master] Fighter Diane, and SSR [Light of Hope] New King Arthur.

Beyond that, there is the Demonic Beast Graeon Special Boss Battle to tackle. Emerging victorious will net players a Broken Helmet which can then be exchanged for Escanor's costume. Elsewhere, the Special Recipe Event will earn players materials that can be used to create new dishes.

New items have been added to the game as well such as the Special Hawk Pass. This will give players the Elizabeth Mint Green Cheering Uniform, Part.2 Guaranteed SSR Tickets, Auto Clear Tickets and Diamonds when they buy it.

The Seven Deadly Sins: Grand Cross is available now over on the App Store and Google Play. It's a free-to-play game with in-app purchases.

In need of some high-quality RPGs you can play on your phone? Well, here are 25 of the very best for iPhone & iPad
Next Up :
Pumped BMX Flow is a new BMX arcade game for iOS out now