With the official release of Diablo Immortal just around the corner (hopefully), everybody's excited to learn a little more about the popular mobile ARPG. Apart from the initial announcement for the game, which dates back a few years now, there hasn't been much in terms of the actual... game.

However, that all changed when we finally received some information regarding the classes in their latest announcement, so it's only natural that we would create a complete guide for Diablo Immortal classes to give you some more information about what is to come and how you can pick the best one according to your playstyle.

If you've played Diablo in the past, chances are you're already familiar with some of the features the different classes gave. However, if you're completely new and are excited about this up-and-coming action RPG, then you're surely going to enjoy every new piece of information coming your way.

How many classes are in Diablo Immortal?

First and foremost, we only know about six Diablo Immortal classes so far: Barbarian, Crusader, Demon Hunter, Monk, Wizard and Necromancer. These are all pretty standard when it comes to Diablo, and if you've played Diablo III, you probably noticed one of the characters missing in Diablo Immortal, and that is the Witch Doctor.

While we haven't been able to play as the Witch Doctor just yet, the other six are pretty similar to what we're used to in Diablo. As for the release date of this seventh class, there has been no information so far. We'll make sure to keep you up to speed in case some new information gets revealed, but in the meantime, we'll shift our attention towards the other six.

How to pick the best class in Diablo Immortal that suits you?

Depending on your play style, each of these classes has a different approach. Some of them are more hands-on, while others are ranged or command various summons. Of course, there is no best class, since all of them are viable and equally strong in terms of power. The only difference is how you play them. The ranged and summon characters are arguably less tanky than the melee ones, as is the custom with most RPGs.

Of course, you can enhance various stats by equipping specific gear, but that's a whole different story. The main point is that you want to pick a class that you like the gameplay of since all of them are viable in the end game - the point is getting there!

The answer for this is a swift no (or at least, that's how things seem at this moment). With the information we have right now, it appears that you can pick the gender you'd like for each of the six classes, so worry not. If you want to play a Wizard but want it to be male, that's totally possible!

So, let's start with the beginning and work our way through each and every one revealed so far, shall we? 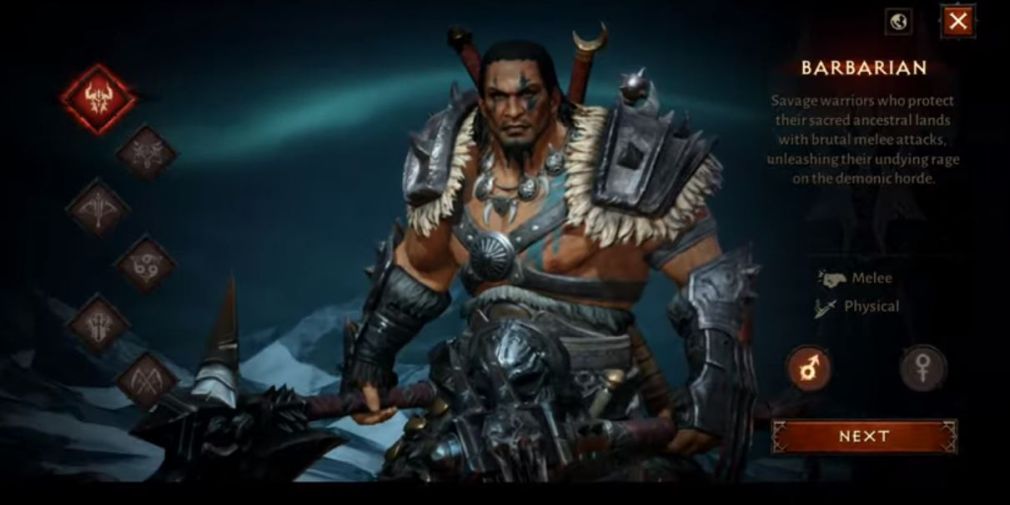 The Barbarian is one of the staple Diablo Immortal classes - a bulky warrior with powerful melee attacks and a ravaged look that is every bit exciting, just like you might have expected. This class is known to have retained some of its skills from Diablo II and III, so if you've been a long-time fan of this class, rest assured, it's probably going to be just like you have imagined.

So far that's all we know - there is a possibility that a number of skills will be added to make it more exciting for mobile play, but at this moment in time we don't have any information about them. 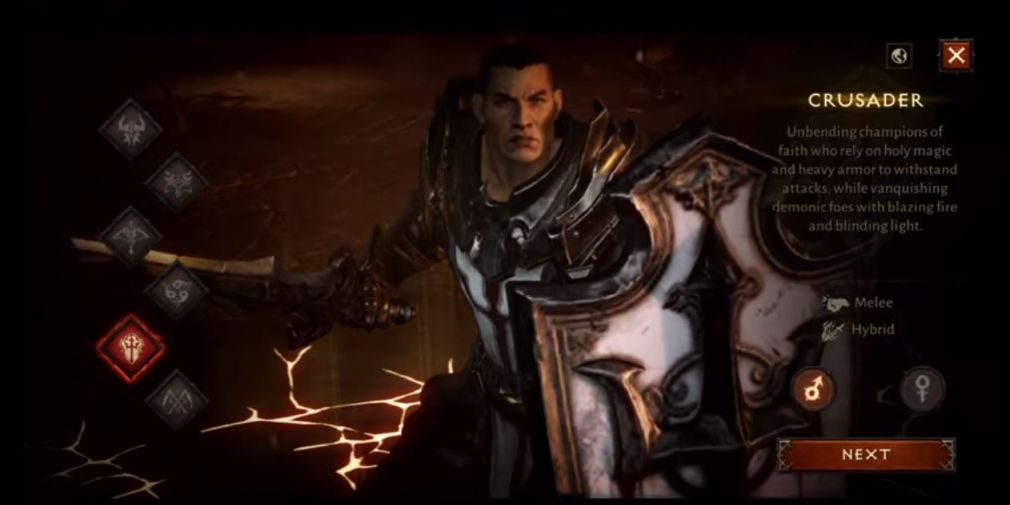 The Crusader might seem like a rather defensive class at the start (if you could say that), but in fact, it's a beast in terms of damage too. The Crusader has got skills that can protect them as well as deal damage, such as Blessed Shield, the ability we've known from Diablo III. With this, the Crusader is able to deal AoE damage to enemies in an area. Of course, at the moment we don't have much to go by, so this is all we managed to find out about the Crusader in Diablo Immortal:

Not all of these skills have been confirmed, so we're yet to see what the game has in store for us! 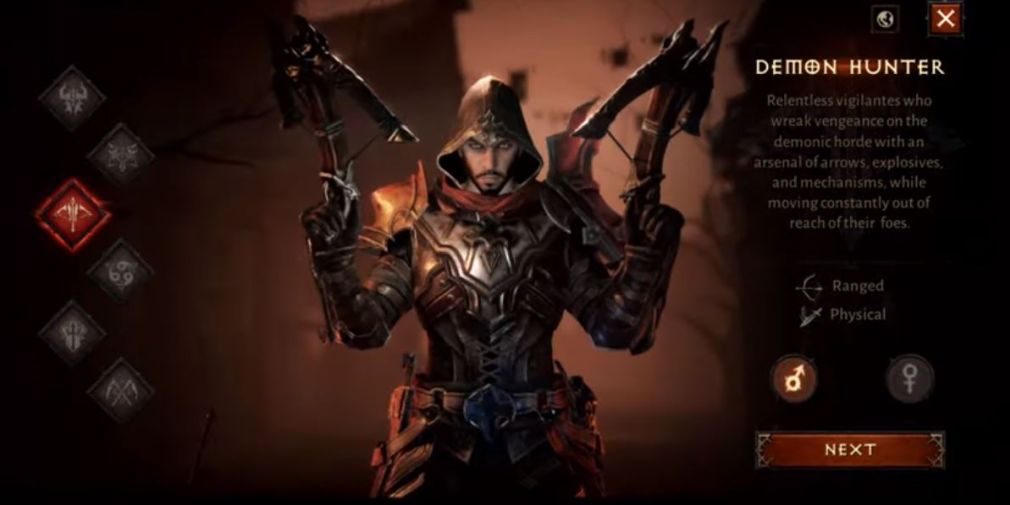 Demon Hunters are powerful and fearless and use a number of different strategies in order to obliterate demons. They can make great use of their ranged weapons, as well as traps and even shadow magic. A deadly combination of a crossbow and shadow magic (only wielded by the Demon Hunters) allows for many playstyles and unique skill combinations.

It can be tricky at times, but that's part of their appeal! 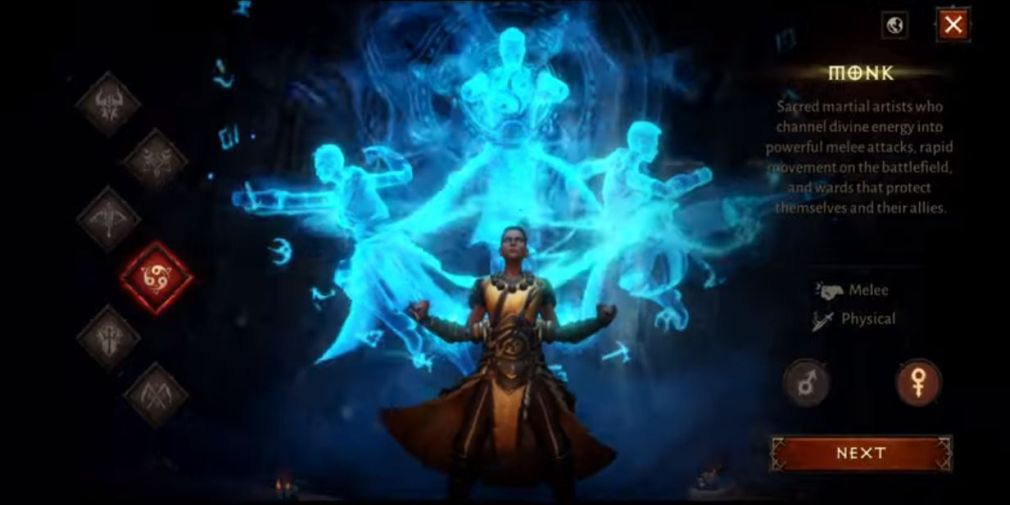 Another one of my personal favourites, the Monk class is one of the few who can manipulate (and obliterate) enemies with immersive prowess and strength. Monks are able to use the power of the one thousand and one gods of Ivgorod, who take great pride in their belief, strength and resolve. It's an impressive feat, given their sheer force and energy-powered attacks.

Since not all of these skills have been confirmed, they are subject to change. We hope to see some of the Diablo III Mantra skills too when it comes to Monks, but nothing new has been revealed so far! 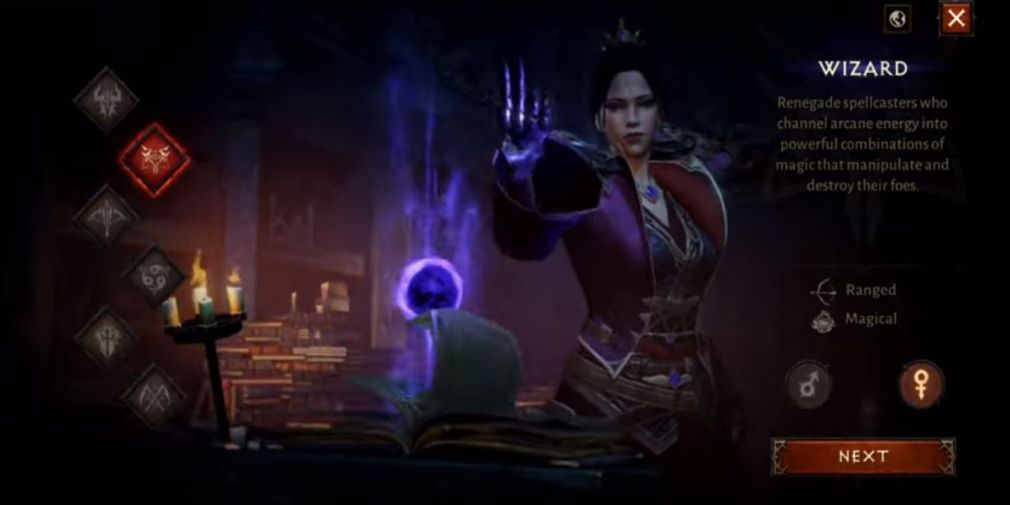 Another of the staple Diablo classes, the Wizard is the typical 'mage', wielding a staff or a wand, and casting powerful ranged spells. The Wizard can manipulate elements, burning, freezing, or electrocuting the enemies that lie ahead. It's an extremely fun class, that amasses great strength and is one of my personal favourites.

More skills to be revealed in the future... 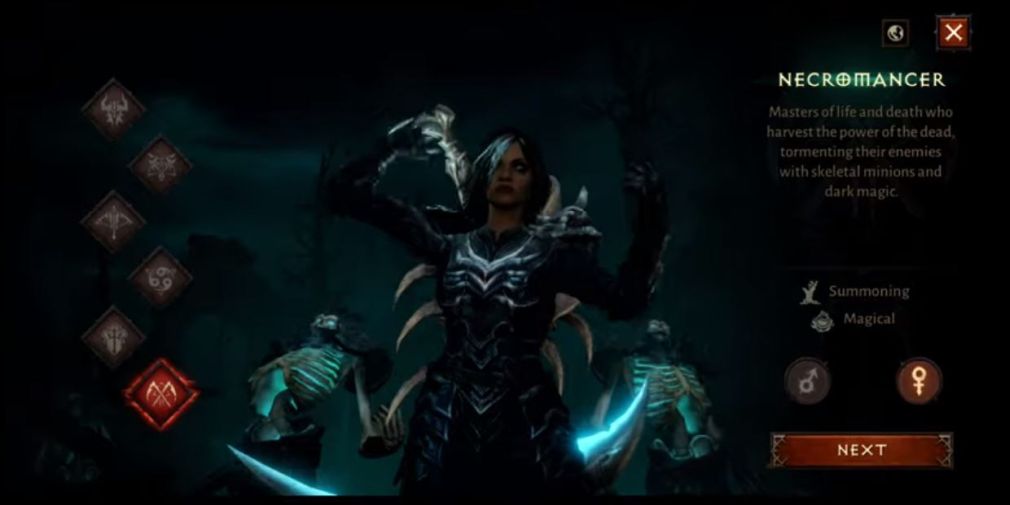 Last but not least, we have the Necromancer - the character able to raise skeletons and manipulate them into attacking enemies in his place. The Necro is probably going to have the ability to summon more than just skeletons, but as of right now, we don't have anything concrete to go by.

We're also not 100% sure which of the following abilities have been confirmed, but here's what we believe the Necromancer will have. We'll make sure to update this as soon as we learn some more crucial information!

Take a look at:

0/6
Next Up :
Hitman Sniper: The Shadows - Campaign tips, cheats, hints