Devsisters has readied yet another update for the super popular RPG, Cookie Run: Kingdom. This one is a continuation of the Stories by the Fireplace update that went live a couple of weeks ago and will wrap 2022 up. It will introduce yet another Cookie, alongside a bunch of other content.

Cookie Run: Kingdom’s Year End Update kicks off with the Pinecone Cookie, which was seen as an NPC when the previous update launched. The Pinecone Cookie is an Epic Cookie which belongs to the Bomber Ball that leads the battle from the Front rather than the Middle position that most Bombers have. 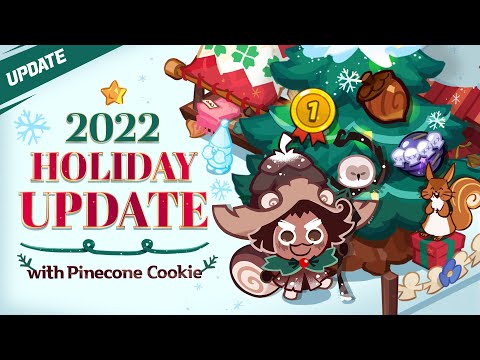 Their move is called Pinecone Bomb, and it sees the Cookie step onto a tree golem. While riding this creature, Pinecone Cookie heals itself and two allies with the highest attack, while throwing Pinecone bombs at the strongest opponents. Frost-inflicted targets will end up getting stunned and those that are immune will be hit harder.

Pinecone Cookie has been voiced by Mara Junot (God of War Ragnarok, Genshin Impact) in English and Yo Taichi (Demon Slayer, JoJo’s Bizarre Adventure) in Japanese. Other languages include Kim A-rong in Korean, Wan Yu-Ling in Taiwanese, and Pornprapa Swangsak in Thai.

In addition to this, the Squirrel Shop is open for Christmas and allows players to buy a bunch of holiday-themed décor and exclusive special treasures available only here. Liquorice Cookie receives its own Magic Candy too, which spawns spirits that go and attack enemies.

Don’t forget to cast your vote as well! Currently, polling is going on to choose the Cookie of the Year as well as the Kingdom of the year. Players can hop into the game to vote and see their favourites get to first place.

Next Up :
Ninja Must Die, Pandada Games' action platformer with stylish visuals, is out now on iOS and Android