Another Eden: The Cat Beyond Time and Space is teasing fans with an upcoming crossover with an unknown Square Enix title, making the mobile RPG from WFS, Inc. even more intriguing than it already is. Announced via Facebook just a few hours ago, the upcoming collaboration event for the new Symphony will reveal more details in a YouTube livestream starting at December 4 (Sat), 9:00 (UTC).

In Another Eden, players embark on a single-player adventure across time. As you go through the different chapters, the narrative grows even deeper just like classic JRPGs do. For the upcoming Square Enix collab, players can likely expect some juicy details from Another Eden Community Manager Scott, as well as appearances from key members of the development staff. This includes video appearances from Scenario Writer and Director Masato Kato, Daisuke Takeshima (Director), Takahito Exa (Art Director), and Shinwoo Choi (Character Designer). 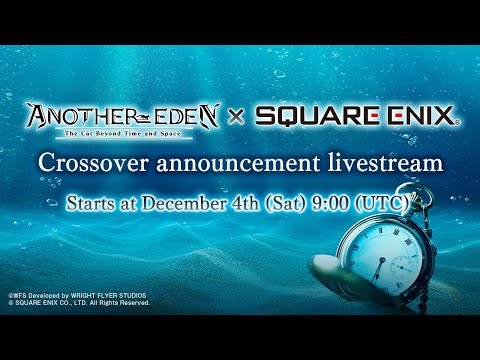 While we're hanging onto the edge of our seats, fans from the community have already been speculating about which Square Enix title the collab will be all about. Players have guessed everything from Final Fantasy titles to Kingdom Hearts, but personally, I can venture a guess myself that it might just be Chrono Trigger or Chrono Cross.

Another Eden itself is already entangled in a web of time traveling goodness, so having a collab with one of the Chrono series just makes sense, given its similar themes. Of course, that's just my personal opinion - we'll all just have to wait until the livestream for the official announcement.

For now, you can download the game on the iOS App Store or on the Google Play Store for Android devices. It's a free-to-play game with in-app purchases.

Are you on the hunt for more JRPGs? Why not take a gander at our list of the top 25 best Android JRPGs for phones and tablets?

Next Up :
Summoners War: Lost Centuria adds a new monster, a co-op game mode, and more in Season 8

Another Eden adds new chapter, maps, login bonuses and more to the JRPG in latest update

Another Eden launches crossover with Chrono Cross, adding new characters, events, and upgrades to the JRPG