Since Netmarble began its epic journey across the vast world of The Seven Deadly Sins in 2020, players all over the globe have been enjoying an engaging mobile experience set in the popular anime series. Now, The Seven Deadly Sins: Grand Cross is celebrating two years of RPG goodness with pick-up rates, new content, a special draw and more - and here's what you can expect during the massive two-year anniversary celebration.

To keep up the festivities of the two-year global service anniversary, Netmarble is offering players the chance to collect [Waves of the Earth] Queen Diane, which is the very first festival hero for The Seven Deadly Sins character Diane. There will also be a pick-up draw for previous festival heroes like [Invincible Avatar] Escanor "The One", [Immortal's Return] Purgatory Ban and [Protector King] Fairy King Harlequin.

As a bonus, players who can hit 900 Loyalty Points in the 7DS 2nd Anniversary Festival Draw can immediately nab one of the four festival heroes just because. Plus, a hero costume for Diane is up for grabs when players defeat the new Baruja event boss. 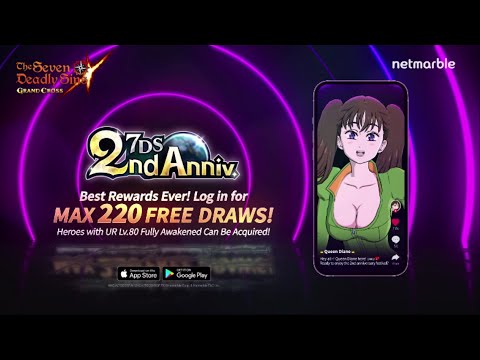 Fans of the deep narrative can look forward to Story Chapter 22.5, along with an expanded Player Rank from 90 to 100. Beginning March 8th, tons of free draws will be given away during the Global 2nd Anniversary Special Draw - players simply have to log into the 28-day-long attendance event to score in-game goodies such as 2nd Anniversary Special Tickets.

To top it all off, when players acquire any of the 12 SSR-grade Giant heroes (Diane, Matrona, Drol etc.) from the Pick-Up Draw during the anniversary, heroes will be instantly fully awakened at Level 80 and at the UR grade. Players can also take advantage of their Loyalty Points to pick either a [Halloween] Protective Heart Diane or a [Halloween] Mercenary Matrona.

Quality production value fans have come to know and love

Since the game's official launch back in March of 2020, players have been enjoying the high-resolution 3D graphics of the hit title, along with over a hundred cinematic cutscenes and stunning animation sequences. The game not only breathes life into the original manga “Nanatsu no Taizai” by Nakaba Suzuki, but it also invites players to experience the franchise in a more interactive and immersive way.

As the game hits the two-year mark, players can no doubt expect more exciting updates to come - a long way from the OG format serialised in the weekly SHONEN MAGAZINE. In the hands of industry staple Netmarble (of Marvel MARVEL Future Revolution, Ni no Kuni: Cross Worlds, Blade & Soul Revolution and MARVEL Future Fight fame), The Seven Deadly Sins: Grand Cross can only grow bigger and better from here.

If you're keen on experiencing the two-year anniversary festivities for yourself, you can download The Seven Deadly Sins: Grand Cross on the iOS App Store and on the Google Play Store for Android devices. It's a free-to-play game with in-app purchases.

What's A Preferred Partner Feature?
From time to time Steel Media offers companies and organisations the opportunity to partner with us on specially commissioned articles on subjects we think are of interest to our readers. For more information about how we work with commercial partners, please read our Sponsorship Editorial Independence Policy.
If you're interested in becoming a Preferred Partner please click here.
Next Up :
RuPaul’s Drag Race Superstar: 5 reasons to play this fab fashion game