Boasting cinematic cutscenes and an exhilarating narrative that stays true to the OG anime, The Seven Deadly Sins: Grand Cross lets players dive into the hit series in a more immersive way on mobile. Now in its third year, Netmarble's popular title is giving away tons of in-game goodies to thank fans for their love and support through the years - and here's what you can expect from the limited-time event.

For the third anniversary, the first light attribute hero [Restored Memories] Elizabeth of Eternal Rebirth is joining the fray. Her ability to reduce damage taken from other attributes except Light by 10%, and decreases allies’ damage taken from heroes with an attribute disadvantage by 10% can greatly turn the tide in your favor during battle. 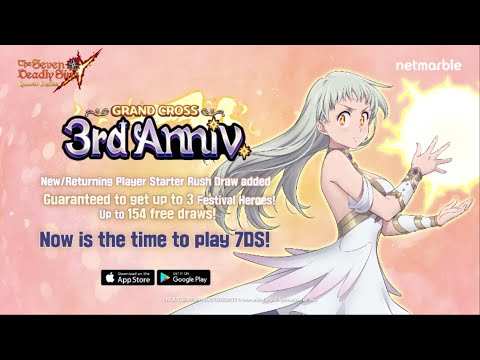 Free draws from the gacha pool

The Starter RushDraw Event will give away a total of 154 draws during the festivities. In particular, both new and returning players can score 11 free draw tickets every day for the first 14 days. (for up to 154 free draws)

Additionally, the 3rd Anniversary Birthday Event lets players log in for 28 days and nab plenty of rewards, which include up to 300 diamonds simply by logging into the game. The Attendance Event lets new and returning players win big as well - in-game goodies include Full Awakening Tokens and SSR hero tickets up for grabs.

Finally, the Grand Cross 3rd Anniversary Grand Festival Poll will give everyone the chance to get their favorite heroes through a special draw option. Players can also look forward to the new Death Match content and Story Chapter 23.

You can download The Seven Deadly Sins: Grand Cross on the iOS App Store and on the Google Play Store for Android devices. It's a free-to-play game with in-app purchases. You can also join the community of followers over on the official Facebook page, or have a look at the official website to stay updated on all the latest developments.

What's A Preferred Partner Feature?
From time to time Steel Media offers companies and organisations the opportunity to partner with us on specially commissioned articles on subjects we think are of interest to our readers. For more information about how we work with commercial partners, please read our Sponsorship Editorial Independence Policy.
If you're interested in becoming a Preferred Partner please click here.
Next Up :
Figure Fantasy: What you need to know about the Sweet Home collab event