To thank loyal fans for their love and support these past two years, Netmarble is holding tons of in-game events for The Seven Deadly Sins: Grand Cross. The latest festivities for the mobile RPG include a new festival hero [Protector King] Fairy King Harlequin, as well as free draws, a new chapter, and more.

The Seven Deadly Sins: Grand Cross is making the cinematic adventure even more exciting with the return of previous festival heroes "The One" Escanor, Purgatory Ban, and Merlin the Daughter of Belialuin. Players can also expect to score up to 110 Homecoming Hero pick up Draws, plus up to 25 Festival pick up tickets throughout the limited-time event. 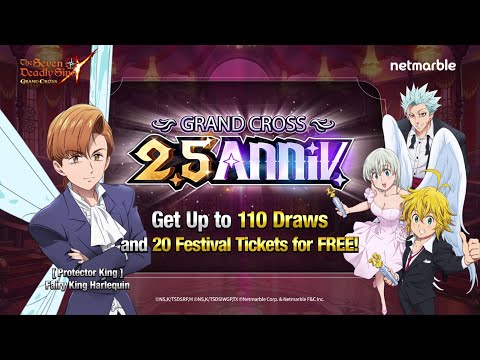 Meanwhile, players can evolve their favorite hero to the maximum evolution level [UR 90 level] in the One-step Evolution Support Bonus event. Making a comeback as well are the Event Boss Battle "Demon Kimara" and "Demon Soldier Malek" challenges.

Additionally, players can acquire a wide variety of rewards through Valenti’s Very Ordinary Day Event. Simply roll the dice and finish the board to score cool items like Celebration artifact cards and Lostvayne Meliodas' special costume.

The Seven Deadly Sins: Grand Cross is available to download on the iOS App Store and on the Google Play Store for Android devices as a free-to-play game with in-app purchases.

What's A Preferred Partner Feature?
From time to time Steel Media offers companies and organisations the opportunity to partner with us on specially commissioned articles on subjects we think are of interest to our readers. For more information about how we work with commercial partners, please read our Sponsorship Editorial Independence Policy.
If you're interested in becoming a Preferred Partner please click here.
Next Up :
Desert Nomad is a desert survival sim that's out now in Early Access on Google Play