Tetris Battle Royale isn't a collection of words you ever imagine yourself having to think about, let alone dedicate an entire review to. But here we are - Tetris 99 is exactly that.

It combines the ruthless, timeless, block-stacking puzzler with a chaotic competitive multiplayer element, in which you're trying to drop as much garbage on your opponent's grid as possible.

And, honestly, it's really good fun. Confusing and ridiculous? Absolutely. And it's a little barebones right now. But at its core, this is a brilliant game of Tetris made even sillier.

I am the man who arranges the blocks

You all know the rules of Tetris by now, surely. Blocks appear at the top of the screen and it's your job to align them around the game board so they don't overflow and end your game. 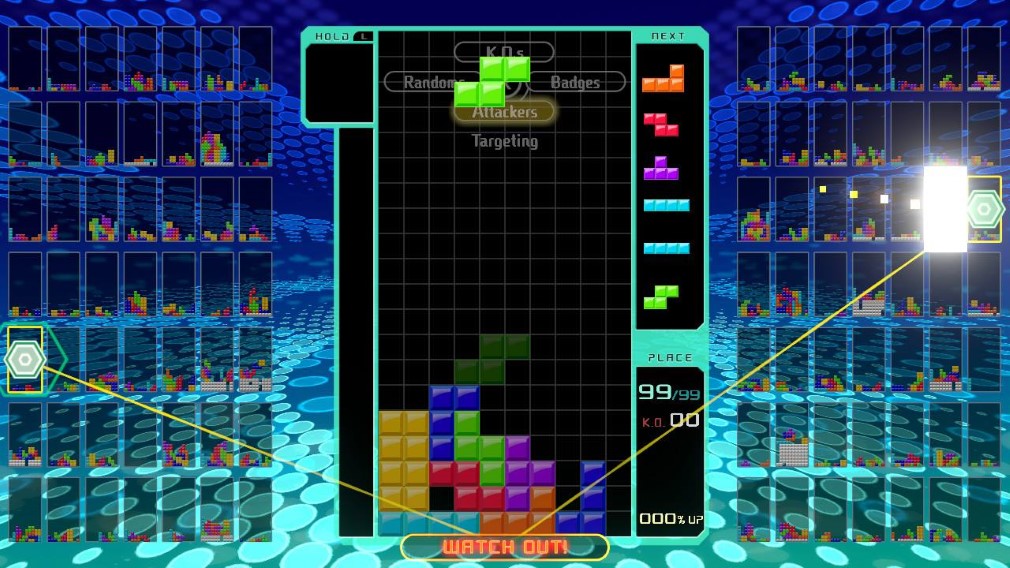 Make a row of blocks and they'll disappear. Make several rows at the same time and they'll also disappear, clearing up even more space than before. Simple stuff, hard to master.

This is Tetris as you know and love it, and it's wonderfully responsive to boot. But there's a catch - you're up against 98 other people.

Sky Gamblers: Afterburner review – "A decent high-flying diversion that falls flat where it counts the most"

All around your board, you can see each and every player's own grid filling up with tetronimos, and it's up to you to clear lines to send garbage piles over to their grids and force them into a game over state.

This version of multiplayer Tetris isn't particularly new either, but facing off against so many people at once does add an interesting, chaotic spin to the formula.

Where we dropping, boys?

For starters, there is a lot going on at once. It's nigh-on impossible to keep track of the other players, so developing a bit of tunnel vision on your own grid is the key to success.

You can manually choose which player you want to target with your garbage, but with a swift flick of the right stick you can let the game decide whether to target random players, players with badges, players who are targeting you, or just the players who are closest to getting knocked out.

This alleviates some of the pressure from you, and means you can focus on the real task at hand - not sucking at Tetris. Which, unless you've been playing for the past few decades, you probably will.

And then the garbage starts to pile. A rogue break in a row has screwed everything up for you, and you're rushing to fix your problem before its too late. More garbage. More missed steps. Death. Game over. 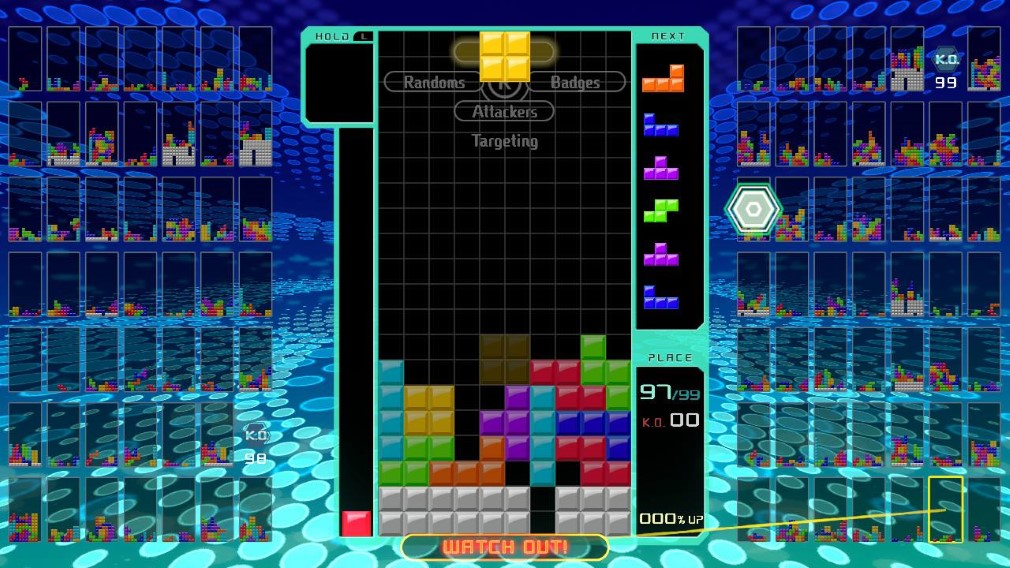 And then you jump back in. Getting into matches is pretty easy at the moment, thanks to a lot of intrigued Switch owners, and the fact that it's completely free to play. And when you're playing, there's no lag or anything - just smooth Tetris action all the way.

But there's not much else to the game beyond playing Tetris. The only other things you can do is look at your gameplay stats or change the options. You level up from time to time, but so far this is completely pointless - you don't earn anything from it, other than a bigger number next to your name.

I'll have a Flake as well, actually

Nintendo is planning on running regular events to keep people coming back for more, but it needs to get on that pretty quickly if it wants to keep hold of the players who are just around for a free lark.

Ultimately, Tetris 99's problem lies with its players. If they don't stick around, the game will simply die, and no innovations six months down the line are going to fix that.

However, you really should give it a whirl. It's classic Tetris fun wrapped up in a layer of utter chaos, and as stupid a premise as it is, it's well worth a download. It is free, after all.

Tetris 99 is chaotic, ridiculous, and a little barebones, but it's also a damn good game of Tetris
Next Up :
REDMAGIC 7S Pro Supernova Lords Mobile Edition review - "A true powerhouse dedicated for mobile gamers"