The very best platformers thrive because they're not afraid to play around with our senses of place and timing. They establish rules, then allow the player to find the limits of those rules, and, if the game is brave enough, gives them the chance every now and then to break them for great reward.

Linn: Path of Orchards is smart enough to understand that, and it's designed to make you reconsider the ground you're standing on and the jumps you're having to make. It takes skill to do that and not confuse or confound the player, and for the most part the game gets it just right.

There are moments where you'll be a little on the lost side, but the levels are short enough that even if you have to bodge your way through one of them, you'll soon forget about it in the swirl of other challenges and amazing ideas.

While at first glance the game might look like it's channeling Monument Valley, this is actually a 2D platformer. You're not twisting and reshaping the world around you with taps and swipes - instead you're trying to jump, slide, and dart your way through levels that shift and change whether you're paying attention or not.

It's easier to explain with an example - you might start off on a flat surface, but as you tap to start running, that surface is going to start moving. There are times when you'll start on one side of a platform, leap away from it around a bunch of others, and eventually land back on the opposite side of the one you started on.

There's little chance to plan on your first go, meaning there's a lot of twitchy moves you need to make as the level arranges and rearranges itself around you. Inevitably there are gold orbs to collect, challenges to beat, and secrets to find. This is, after all, a premium game. 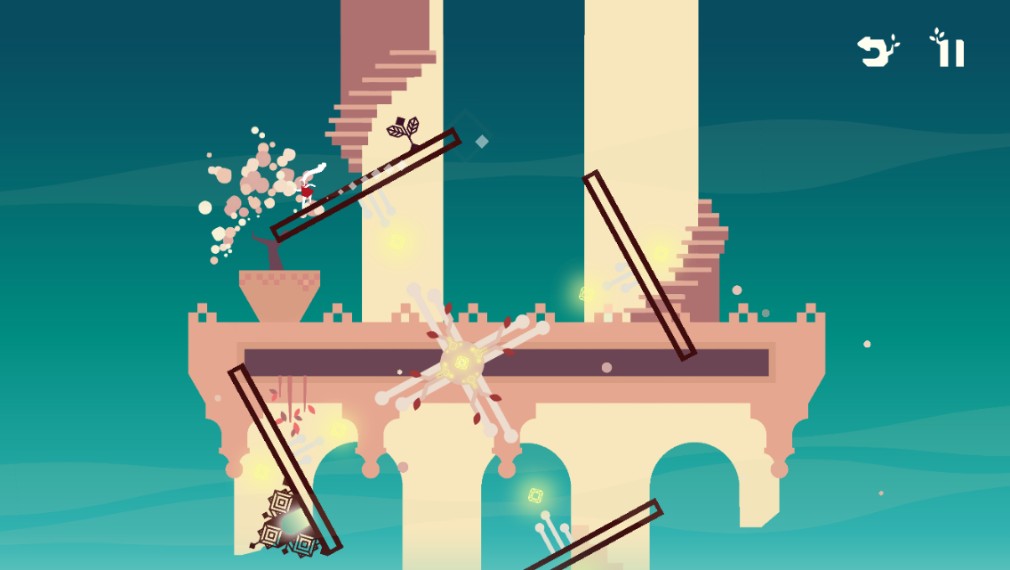 Things do sometimes get a little sticky. There'll be levels where you manage to push your way through with no elegance or finesse, and that cheapens some of your other, more satisfactory successes.

Again, because the levels are so short, there's not much time to dwell on this lesser achievements, and you can always hop back into a level later to try and finish it with a little more skill. Still, it's a jarring moment when it happens, and it deserves flagging up.

Other times, when you nail a level on your first go, dashing and darting in all the right directions with only milliseconds to make your decisions, Linn: Path of Orchards can feel absolutely sublime.

Path me the orchards

This isn't a game of two halves so much as it is a brilliant experience that's sometimes dragged back down to earth with a clunk. It's never a bang, it's never enough to shake you out of playing, but it's worth bearing in mind.

For the most part Linn: Path of Orchards is a bright, intelligent platformer that takes the rules, mixes them up, and then tells you to have fun with the shuffled-up outcome. No, it isn't perfect, but for the most part it's close enough that you're not going to mind.

Tetris 99 is Tetris Battle Royale, and it's free on Switch

Joker will join the Super Smash Bros. Ultimate roster by the end of April

App Army Assembles - Does Linn: Path of Orchards have our readers jumping for joy?

Linn: Path of Orchards video review - "Keep your feet on the ground"