There's Big news for Tetris 99 fans today, as Nintendo have released a new DLC for the popular free-for-all, 99 player twist on the classic puzzler. The Big Block DLC pack adds two new modes to the game, both of them centered around offline play.

The first mode, CPU Battle, replaces the 98 opponents of the normal mode with bots. As with the other new mode this allows for offline play, which is something that Tetris 99 has been sorely missing. 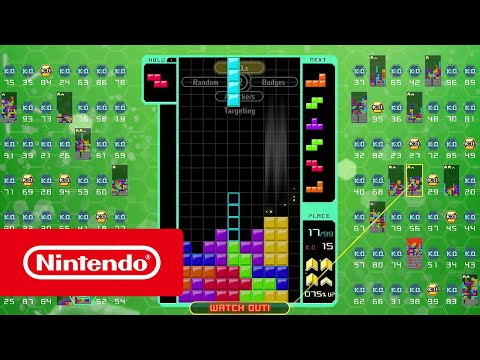 The second mode, Marathon, is similar to traditional Tetris. Players play solo, chasing the highest score they can get.

The Big Block DLC marks the first time that offline players can interact with the Tetris 99 experience, which is otherwise gated by a subscription fee for online play. Normally players will need to have paid for the Nintendo Switch Online membership which comes in at $3.99 a month or $19.99 a year.

In my opinion this is a good move from Nintendo. I know a lot of people who enjoyed the concept of Tetris 99 however did not want to spend out for an online membership just to experience something that they felt they might just fail miserably at. While $9.99 for an offline DLC might seem like a lot, it's much more tenable because of the similarities between Marathon mode and the classic Tetris experience.

Nintendo have also taken the opportunity to confirm that there will be a further offline mode releasing later this year.

Looking for the latest news? We have a section for that.
Next Up :
Daily Dadish lets you try and save your missing radish kids one day at a time, out now on mobile