Get that fresh battle royale victory in style with all the rules and mechanics of Super Mario Bros. 35 explained

Super Mario Bros. 35 is finally here and available as a free download for all Nintendo Switch Online members - about time that subscription did something just for you, eh?

Super Mario Bros. 35 takes you through the classic Super Mario Bros. game, but with a brand new twist, which is basically that it is a 35-man battle royale, taking place on Mario's 35th anniversary. 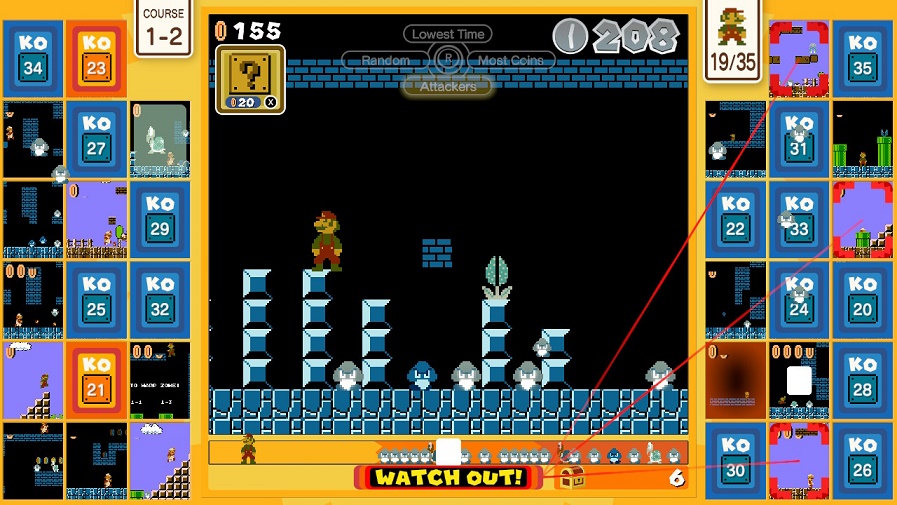 In this Tetris 99-alike you'll be running through familiar Mario stages under the threat of a timer, and taking down all manner of devious enemies, but the way in which you do so can mean the difference between life and death.

There are loads of items to unlock and victories to achieve out there, and if you follow these tips you'll soon rise to the top of the rankings…

Coins are surprisingly important in this game - the more coins you have, the more vicious the enemies you send to the stages of others, which might come as a surprise.

This means that if you want to thin out the crowd and go for a victory, you should hold onto your coins like a hoarder, and not take those item boxes for granted. Go for 1-ups for a burst of 20 extra coins.

But that's not all! You can tap the X button to spend 20 coins and give yourself a random power up, which could mean the difference between life and death. It's a risk-reward scenario, and you should choose whatever is best for you. But yeah, going into a horde of enemies while only being a single hit away from death is a bad idea, basically.

You will start the game with a fairly short timer, and of course, you want to stay alive and beat that timer. You might be afraid of the upcoming enemies, but the timer is even more deadly.

Defeating enemies will give you extra time, and while it might be tempting to use Fire Mario to blast them away, that will only reward you with a single extra second per kill. Jumping on them is far more rewarding.

This is especially true if the enemies are grouped together, allowing you to take out many at a time. Chain jumps together without landing to get even more time, and then you can feel safe for a while.

Targeting the weak or the strong

While playing you will be able to select which other player to target, either specifically, or just down to a specific set of rules. Use the right stick to flick between four different modes.

You should primarily aim to target enemies with the highest coin counts (they'll be the biggest problem) or whoever is targeting you, to free yourself of the shackles.

If you only have a few enemies left, you can target people individually, and take down whomever you feel will be the biggest threat in the final stretch. Be devious, be sneaky.

Just a matter of patience

At the end of the game, when there are barely any players left and plenty of enemies on the screen, you could just wait it out until the timer elapses, honestly.

You just need to be the final survivor, right? The only thing that stops you from just standing in a safe place for the entire game is the timer, but if you have plenty of time stacked up already from some huge enemy-stomping combos, then you don't need to worry about rushing through to the end to survive.

So, if you find yourself a minute up on the clock with only a few enemies left alive, you could just wait it out until they die - just make sure to not put yourself in an awkward position where you're going to sacrifice yourself by timing out…