Summoners War's Cookie Run Kingdom collaboration is now underway, bringing together two popular mobile games for one, hopefully, epic event. Cookie Run Kingdom exploded in popularity last year, and it continues to go from strength to strength, so it's a smart move from Com2uS to team up with the RPG.

We recently spoke with Taehyoung Kim, Principal Developer of Summoners War, about the collaboration. Together we discussed how the partnership first materialised and the different challenges the team faced when bringing characters from one game to another.

Could you please introduce yourself to our readers and your role on Summoners War: Sky Arena?

It’s great to meet you. My name is Taehyoung Kim, and I am the Principal Developer of Summoners War at Com2uS.

How did the collaboration between Summoners War: Sky Arena and Cookie Run Kingdom come about?

With every collaboration we always look at three key areas: How well it fits, how different it is, and how enjoyable it would be when paired with Summoners War. We are all fans of Cookie Run Kingdom here. It’s a fun experience with a lot of great ideas and colorful and unique characters.

While playing Cookie Run Kingdom, we felt like the game fit very well with Summoners War. Like Summoners War, Cookie Run Kingdom features many great characters with interesting abilities that can be used in the turn-based RPG experience. The ability to create a village similar to Sky Island in Summoners also allowed us to easily come up with ideas for the crossover.

Differences in the games were also really important and Cookie Run Kingdom’s fun and loveable look and feel of its characters felt like a fresh and very different new visual for characters in Summoners War. 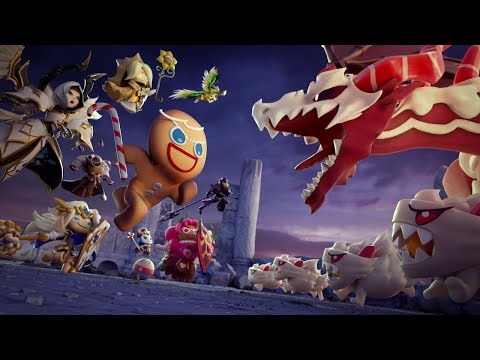 How were the five characters that will feature in the collaboration selected?

There are so many interesting Cookies to potentially feature from Cookie Run Kingdom it was a really tough decision to make. Ultimately we decided on a total of five different characters based on their unique abilities and how they could add to the Summoners War experience and a little bit of all of our personal biases on our favorite Cookies. Players can collect: Pure Vanilla Cookie, Hollyberry Cookie, Espresso Cookie, Madeleine Cookie, and GingerBrave.

How difficult was it to adapt each character for Summoners War: Sky Arena whilst keeping their essence from Cookie Run Kingdom?

Likewise, can you talk us through the process of creating and designing a character that originates in another game from your own?

Designing collaboration characters come with both pleasure and challenges. For our designers that have been accustomed to Summoners War’s art style for eight years, it was a refreshing experience to draw cute cookies.

I’d say the biggest challenge was figuring out a way to implement the flat cookies into 3D. Since the Harg and Brownie Magician are a similar size, we modeled it after these characters to ensure there was no difference in size or volume. We paid extra attention to the thickness, texture, and small details. For example, Pure Vanilla Cookie has bangs covering about half of his face.

As we were bringing him to 3D, we went back and forth on whether we should place his eyes over or under his hair. Although his eyes are drawn over his hair in Cookie Run Kingdom, we decided to draw his eyes underneath his hair since our game’s art style is 3D.

Another key difference between the two IPs was the facial expressions. Monsters in Summoners War: Sky Arena doesn’t show much emotion or facial expressions, while cookies from Cookie Run Kingdom have lively motions and expressions. Because we wanted to preserve that lively character of the cookies, we introduced expression changes for the first time.

Aside from the characters, what can players expect from the event itself?

Our first collaboration with Street Fighter: Champion Edition in 2020 was mainly focused on the characters. Although it was a huge success, we wanted to incorporate more in-game content and story into our new collaboration. We’ll be introducing various decoration buildings for players to add to their Sky Island including Jellybean Farm, which will also produce Jellybeans as a new in-game currency.

Is there any chance of another collaboration in the future that introduces more Cookie Run Kingdom characters to Summoners War: Sky Arena?

We’re considering various IPs for our next collaboration. Nothing is settled yet and it will take some time for us to discuss and decide, but we’re going to try to come up with another exciting collaboration. Please look forward to it!
Download now!
Summoners War: Sky Arena

Next Up :
Exhilarating MMO game Noah’s Heart launches on AppGallery