Summoners War: Lost Centuria’s v1.5.5 update will introduce two new monsters into the fray, with balance adjustments and content improvements to be added to the hit mobile PvP game.

The latest update to Summoners War: Lost Centuria adds Ritesh (Beast Monk) as an HP type monster, who’s also a Legendary summon with the Wind attribute. His Trick of Wind skill attacks the enemies on the frontline and switches their position randomly at the same time - a nifty trick for when you’re eager to mess up your opponent’s strategy and lineup of monsters.

The skill also grants DEF DOWN II on all frontline foes along with DEF UP II on allies in the same line. Since this monster is an HP type character, the damage dealt with the skill increases according to your maximum HP. 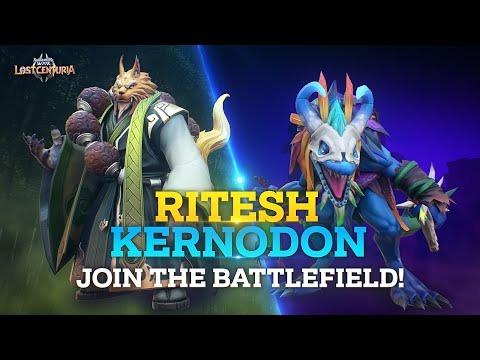 He also has a Passive skill that can escort the ally with the lowest HP with a fixed time - with this skill, Ritesh will receive the damage of the escorted ally instead, making him a good option for when you’re in need of a good party Tank. Top that off with his Crushing Blow Sub Skill - which attacks and stuns the forefront enemy - and you’re golden.

On the other hand, Kernodon is a Rare Water type monster that can attack and inflict DEF DOWN II on the forefront enemy. He also has a Passive skill that will return harmful effects to the enemy attacker with a fixed chance. You can learn more about the other updates in the official update notice, or download Summoners War: Lost Centuria on the iOS App Store or on the Google Play Store for Android. It’s a free-to-play game with in-app purchases.

Looking for more multiplayer titles? Why not have a look at our list of the top 25 best mobile multiplayer games for iPhone and iPad (iOS)?