Can you hear the roar of the crowd?

Rival Stars College Football is a management game where you're the head coach of a college football squad. You're essentially in charge of all of the operations of your football team. This is similar to real-world college football where the coaches run almost everything.

You'll be able to take a look at and recruit some of the best high school football players to join your squad on the campus. This is one particular area where college coaches can make a name for themselves outside of coaching on the field. If you're able to build the best team possible through recruiting, then you're setting yourself up for success.

The playbook will also be at your disposal as well so you can design the plays how you want to help give your team the advantage. As the coach, you're calling the shots on the field and seeing how things play out with the talent you have assembled.

College ball isn't like the pros of course. In the pros, players will stay with a team for a long period of time, especially in the NFL. In college football, players will come and go as their time is usually between two and four years in school before they declare for the NFL Draft or go into another profession. Because of this, there's an added layer of unpredictability in Rival Stars and it's quite fun. Here are several Rival Stars College Football tips for you to keep in mind as you build your legend on campus. 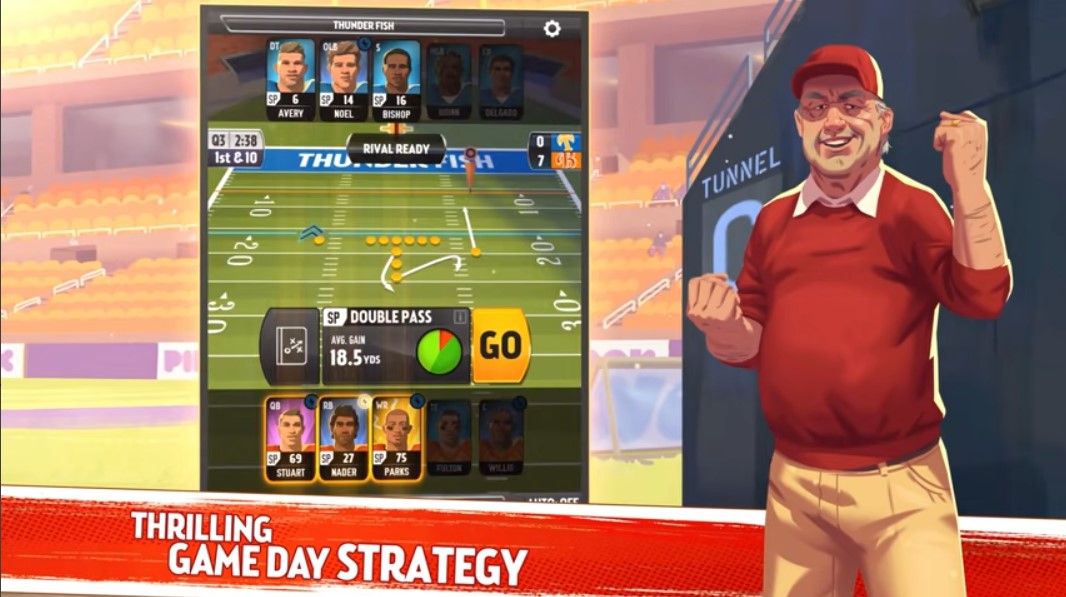 A very fascinating aspect of Rival Stars College Football is the risk/safe feature that comes into play on the field. It's honestly one of the more unique features you'll see in a mobile sports game despite how simple it is. When deciding on plays, you'll see a pie for each one.

These pie charts will be green and red. Green for good, red for bad. Some plays are safer than others with more green in the circle than red. These plays may also only net you a few yards but depending on the situation, that might be all you need. Some plays also have more red in their pies, meaning that these are risky but can be rewarding if things swing in your favour. Typically, long pass plays have pies like this. Once you choose your play, an arrow will spin around the circle.

If it lands in the red, then you might lose yards or worse. If the arrow lands on green, then enjoy the yards you can gain. Now, you can still sometimes make plays even when the arrow lands on red but it's dangerous. And with the games being simulated, it's out of your control. The only thing you can do is call the smart plays at the best times. It's a really fun mechanic that puts your coaching mind to the test without being difficult to understand. One other thing to keep note of is that, depending on what play the defense runs, your pie circle for the play you choose can get safer or riskier.

We talked about the playcalling system in the last tip and speaking of that; one good set of plays to make use of are short passes. These are very safe every time you open your playbook. Even if it gets riskier based on the defensive play, this will still be a type of pass that will go in your favour.

Of course, you'll need to keep in mind your down as well as how many yards you need to reach the first down marker. If you're on 3rd down with 10 yards left, going for a short pass may not be the best move but in most short yard situations, it can come in handy.

Running the ball is also great for short yardage. But, if you're on 3rd or 4th down and you need five yards then a short pass can arguably be better than a run. Overall, short passes aren't always the answer, but they can be your friend of comfort in your time of need on the gridiron.

Tip #3 - Long Passes Can Be Worth The Risk 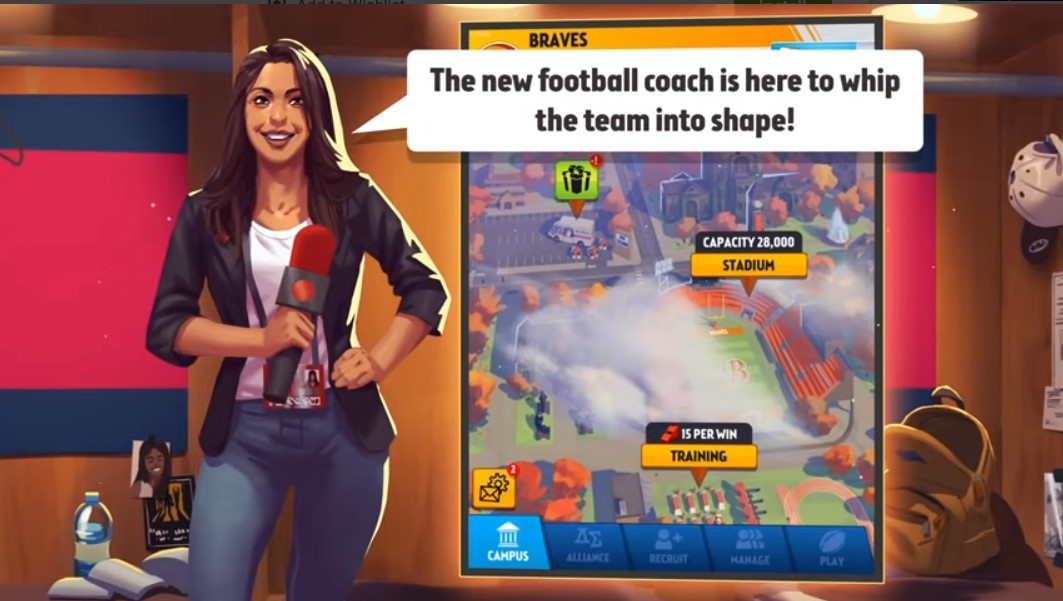 Certain plays can be risky in Rival Stars College football and that includes long passes. However, although they mostly have red in their circles, it won't hurt to be bold and go for it sometimes. It's really all dependent on your situation.

If you're 3rd or 4th and have 20 yards to go for the first down, then you essentially have to go for the long pass, especially since you can't control the players. It's not like in Madden where, if you're great at avoiding tackles you can pick up plenty of yards on short plays.

But, if you're on second down, let's say, then feel free to go deep. You have the opportunity to pick up massive chunks of yardage if the receiver makes the catch. This also opens the door for interception possibilities as well so just be aware. But if things are executed smoothly, you can see your team in the end zone celebrating.

Defense is all up to you in the end and how you want to attack. But, I will say that playing pass defense is a good way to start off. The CPU in Rival Stats College does enjoy passing quite a bit so defending the pass is something you should think about favouring. When they go for these long passes and hit on them, they can gain up to 25 yards and that's a good chunk.

If you see a different pattern where they're throwing short passes or running the ball, then you can change up your strategy a little. You're not going to really know what they're going to pull so it's up to you to think about the situation. If they're on third down or if they have a long way to go for the touchdown, you may see them go for those long bombs as we talked about.

Tip #5 - Blitzing is Both Risky and Fun

Staying on the defensive side of things in Rival Stars College Football, going for a blitz can sometimes prove advantageous for you. If you're newer to American Football, a blitz is where most of your key defense players try to rush to the quarterback. If they're running the ball, then the running back will likely get caught in this storm of defenders.

The risk is that there won't be as much coverage in the backfield, making it a little easier for both the QB and receivers as they have fewer defenders to worry about out there. However, if their offensive line is weak, the QB could also easily get sacked thanks to the ferocity of the blitz.

Although risky at times, blitzing does reward you handsomely on the field as the opponents could lose up to 10 yards or so on the play, putting them in a tough position. It's arguably the most recognizable and popular type of defensive play in college or the NFL and it's either going to do wonders or hurt you but it's worth the shot a few times, especially if you got a good defense on your side.

Since Rival Stars College Football is more of a mobile strategy game than it is a simulation like Madden or NCAA Football, it might not be the best to go for it on 4th down every time. Sometimes it's best to go for a field goal and grab the three points. Every point counts.

Not to mention, if you have a great kicker, make use of him and start booting those kicks through the uprights. The same goes for punting; if you have a good punter, feel free to punt it away if you'd like (I know it's not everyone's favourite thing to do in a game). 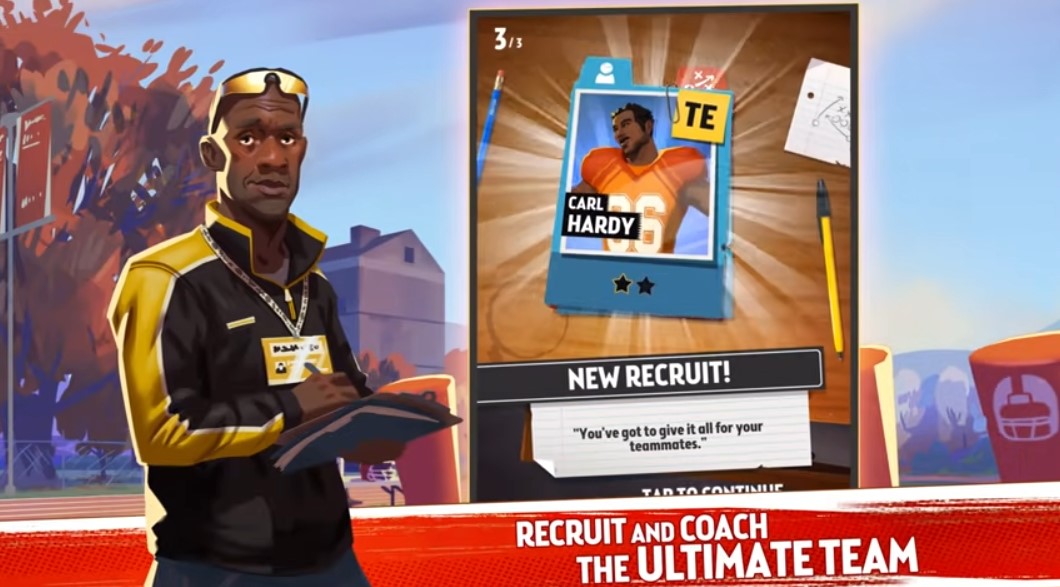 As with real college sports, including football, recruiting can be a major reason for your school's success on the field. Make sure to check in with the Recruit page in Rival Stars College Football and reach out to some high school stars.

You can choose to go Local, Statewide, Nationwide, and even Worldwide to find talent. Each of these will cost a certain amount of Gold which you'll earn by playing games or by purchasing some with real money by clicking on the Gold icon on the top right corner of your screen.

The good thing is that, by staying local, you'll be able to recruit for free every several hours. However, you can get better players by going Statewide, Nationwide, or Worldwide. There will be a page you can look at (click on the little "i" next to each option) that will show you percentage probabilities to get three, four, or five-star recruits versus just one or two-star players. But, starting off, Local is a great way to go. If you feel like your team is struggling, then that might be the best time to upgrade if you aren't ready to do it early on.

One of the amazing things about college football is how historic and how massive most of the stadiums are around the United States. Some of these stadiums usually rank among the biggest in the world, including the stadium at the University of Michigan fittingly called "The Big House" which holds well over 100,000 passionate fans.

Well, you can do the same in Rival Stars College Football. You can regularly grow your stadium's capacity as you level up. This is great not only because it makes your stadium look awesome and intimidating but you'll be able to earn more revenue via ticket sales.

And, of course, more currency means more opportunities to improve your football team, including recruiting and training among other things. So when the opportunity arises, make your home turf into one of the biggest and most terrifying stadiums for opponents.

But aside from having enough Prestige, you'll need whistles too. You can unlock whistles by winning games as well as completing other tasks. They're quite simple to get, in fact, you might earn some by accident essentially. These are also your ticket to building up your stadium.

One of the absolute greatest ways to gain Prestige in Rival Stars College Football is by making players become legends on your campus. By playing well in games, you're bound to have a player become good enough to be enshrined into the Hall of Legends.

Early on you should see yourself coaching one of your players into college football legends. It's a pretty satisfying feeling, especially since you're rewarded for it. So really, just keep on playing and winning games until you see players soar to new heights.

Smart playcalling on the field can lead to this. Remember, Rival Stars isn't a football game where you can control the players and dominate the field. Their success is predicated on your handling of the playbook out on the gridiron.

Bonus Tip: The most basic way to gain Prestige is by earning stars. You'll get stars by playing in and winning games. It's that simple.

0/10
Next Up :
Alchemy Stars tier list - The best characters ranked