In RAID: Shadow Legends, the new Legendary Champion is now upping his status as a fan favourite with his massive cult following. This humorous character has also previously served as a lead in plenty of viral commercial spots. This includes the RAID 2nd Anniversary, RPG Life Training, Therapy, DK Dreams Big, and RAID 3rd Anniversary.

“Deathknight became instantly beloved by fans, and we couldn’t be more excited to answer the call from so many to finally bring them a Legendary version of Deathknight,” says Nick Day, VP of Creative at Plarium. “And to the fans that have always been rooting for the original Deathknight, 6-starring him, and putting him in your lineup regardless of how much weaker it made your team, this Ultimate Deathknight is for you. We (and OG Deathknight) will always appreciate your support and dedication.” 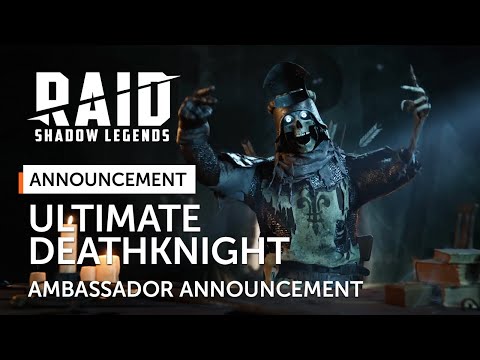 "I’m so proud to officially announce my partnership with Raid as the face… uh, skull, if you will - of the Ultimate Deathknight Campaign,” says Deathknight. “I’ll be hosting this amazing event from August 25 through October 27, and I just want to say, this has been… life-changing. Humbling. I mean, come on - I’m doing press interviews! I met Jeff Goldblum! Heck, I have an agent! To all my fans out there - my 'Skeleton Crew' - I wouldn’t be here without you pushing for this for all these years. I just want you to know that while I’m getting bigger, stronger, and hopefully better - I’m not gonna change. Let’s go get some #Justice4Deathknight.”

You can follow Deathknight on his own Twitter account for more info. You can also catch RAID: Shadow Legends on the iOS App Store and on the Google Play Store for Android devices.