Plarium, the developer of the legendary Raid: Shadow Legends, has announced its official 3rd-anniversary celebration for the dark fantasy RPG. The celebration will run from now until May 14th, allowing for a full month of celebratory events and handouts.

The Arbiter, the in-game tutorial NPC, will be your go-to for the celebration. Whether you’re a returning player or a new one, she’ll be presenting you with a fully personalized list of your in-game battles, successes, and general achievements during your time with the game. Along with this, she’ll also be giving you the gifts, events, and community challenges that will be available during the month-long celebration. Another thing we need to emphasize is that the devs have finally released a new RAID Shadow Legends promo code! 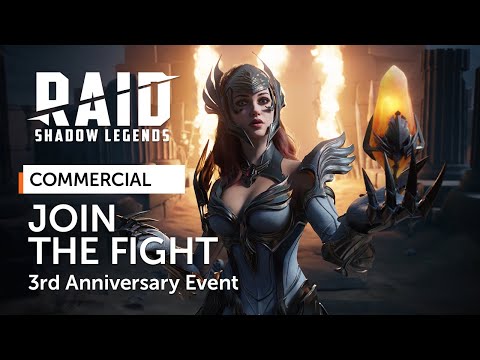 Of course, with such a big event, a new character had to come, and she did indeed. The Epic Champion Talia, a talented magician from the Sacred Order faction is available now. She’ll be an excellent addition to any party’s backline, offering plenty of massive damage-dealing spells for you to sling at the many opponents you’ll be fighting to complete the community challenges.

Given the three years of massive success Raid: Shadow Legends has seen, this celebration is meant to really show the company’s appreciation for the endless support the community has shown the game, and to give all players regardless of playtime or dedication a nod of thanks. It’s also likely safe to say that all these lovely handouts will allow Raid to see a big influx of players as well, letting new and old players alike see what is truly on offer for the RPG.

So, needless to say, there’s no better time to get involved with the title. If you’re looking to do so, or reignite an old flame as a previous player, you can find Raid: Shadow Legends on both the App Store and Google Play as well.

Are you a fan of RPGs like Raid: Shadow Legends? Check out our Top 25 best iOS RPGs!
Next Up :
Cookie Run: Kingdom updates teased during developer stream