Hands-on with OlliOlli: Your next essential PS Vita game

Last week I was down in sunny Brighton for the Develop Conference. I was about to set off back to my hotel after a hard day's keyboard-hammering when a developer asked me to check out his game.

I had a spare five minutes to kill, so I thought, "why not?" Half an hour later, I still had the PS Vita glued to my hands.

The developer was Thomas Hegarty of British studio Roll7, and the game was OlliOlli, an upcoming side-scrolling skateboarding game for the Vita that deserves to be a massive hit when it comes out.

You play as a skater called Gillespie (I told Hegarty that I needed the skater to have a name so that I could properly scream at him, and he christened the little guy on the spot) who's bombing through an urban landscape on his board.

You tap X rhythmically to gain speed, and then use the left stick to ollie into the air and pull off all sorts of flips and tricks. Think of the sort of analogue stick-wrangling that you'd do in Street Fighter and you have an idea how moves are pulled off. 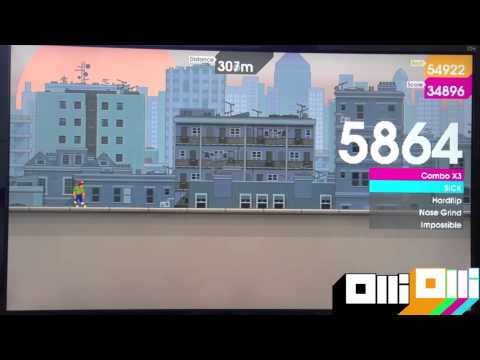 OlliOlli is very much about twitch-based gameplay and tight controls. As you land on a grinding line, you need to hit 'down' on the stick just as you connect to pull off a slick move. If you forget to hit X just as you land you'll reduce your 50,000+ point combo to a measly 100 or so.

And this is a game that's very much about scores, combos, and showing your online friends just how good your timing and precision is.

There's also a Jetpack Joyride-style missions system, whereby the game asks you to, say, pull off five flipkicks in one run, or achieve a specific combo score. There's a lot of stuff to do in OlliOlli.

I asked Hegarty how he and his team came up with the idea. "The objective was to simplify the controls of a skate game as much as possible," he told me. "It's all about twitch reactions, and getting the most out of your environment. In that sense it takes a lot of cues from games like Meat Boy and DustForce."

He's not wrong - I definitely got a Super Meat Boy feel from the game. The desperate hacking together of combos while simultaneously trying to not bail also feels a lot like the wonderful Joe Danger.

Hegarty went on. "Within each level, you'll have an initial overall score target and a combo score target, and these will be tough for the first few plays, but once you're a seasoned player you'll be smashing those scores out the park."

Combinations of button-presses and stick rotations throw up plenty of different tricks to explore, and there will be a huge emphasis on reward through experimentation.

"We really want to reward risk," he notes, "and the whole game plays out on a knife edge - you can pull off the most ludicrous chain of tricks and combos but you still need to nail that landing or you could lose all your points!"

OlliOlli comes with numerous game modes to explore, and online scoreboards are a big portion of every single one.

Career mode throws predefined levels at you, while FreeSkate is all about randomly generated levels. Spots Mode takes one section of a Career level and asks you to pull off the best combo possible.

But it's Daily Grind that excites me most - a random spot can be downloaded every day, and you'll have 24 hours to practise on it and try to pull off the best trick possible.

However, when it comes to your actual high score attempt, you only get one chance to post a score. If you slam your face into the ground, that's you done for the day. Imagine just how tense that run will be.

"Roll7's first game Gets To The Exit was on iOS, and despite some good reviews the sales didn't make pretty reading," Hegarty says.

"It was after that we decided we needed to shift to a console or PC platform - smaller markets perhaps, but more a focused gaming audience."

That's when the Roll7 team met James Marsden from Velocity Ultra studio FuturLab, who introduced them to the Sony team. After pitching multiple game ideas to Sony, the Vita publishing team decided that OlliOlli was very much a game it wanted.

The game was actually originally designed for iPad, but Hegarty says that "the transition from iOS to Vita was actually quite natural, and the analogue controls have hugely enhanced the way the game plays and how you as a player can interact as the skater."

While OlliOlli will be a Vita-exclusive game at launch, Roll7 isn't ruling out other platforms in the future. Given that it was originally built for iPad, iOS will surely be the next step.

The Roll7 team is hoping to have OlliOlli out for PS Vita before Christmas, although Hegarty notes that with the upcoming launches of the Xbox One and PS4 he may consider holding off until after the holidays.