Over here in the UK we've just had two consecutive short weeks, and frankly I think we're all ready to move to a four-day work week. However a short work week doesn't mean a quiet week in the world of news.

In fact, it's anything but, there's been announcements, trailers and updates galore. Among those there's new characters for Mario Tennis Ace, release dates for two open-world crime games, and some impressive sales figures for the Nintendo Labo VR Kit.

We've summed up the biggest news and releases for you right here.

Terraria closing in on release version.

Back in 2011 Terraria released for PC platforms, and while there it did exceptionally well. Later the crafting metroidvania made its way to other platforms. Development was at a slow pace with updates like a second wave of bosses, new biomes and post first-wave of bosses content, however this all made its way over to consoles in time.

Well, the developers have released a new update on their forums detailing the current state of play for current generation versions. The Switch version is now through pre-check and now only has final polish and QA checks left before it is ready to release.

Shakedown Hawaii gets a release date

Shakedown Hawaii, the Retro City Rampage sequel, has now got an official release date. The open-world, empire building game will be releasing on the Nintendo Switch on the 7th of May. 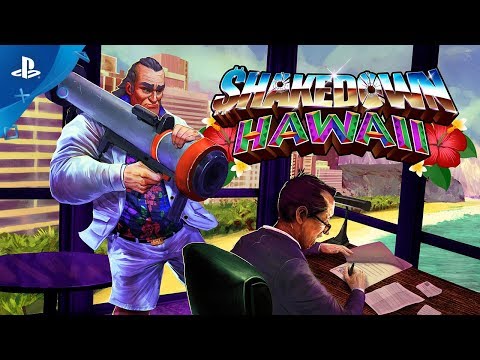 For those unaware of the previous entry in the series, Vblank Entertainment's Retro City Rampage was a long-awaited birds-eye open-world crime game. It apparently started life as a demake of GTA III, an attempt to return it to the earlier style of top-down camera, however the developer ended up creating a much larger experience and one filled with thousands of references to games and pop-culture.

Where Retro City Rampage riffed as a twist on GTA's Liberty City, Shakedown Hawaii is much closer to Vice City in so much as you've got the sun, sea and shores of an ocean-adjacent city and also have the ability to purchase property. Actually, one of Shakedown Hawaii's core features is that you can buy literally every building on the island.

Puyo Puyo Champions confirmed to release in the West

Subscribe to Pocket Gamer on
Puyo Puyo Champions (Puyo Puyo eSports in Asia) has been available in other markets for some time now. Considering the popularity of the recent Puyo Puyo Tetris, and the growing eSport scene for the IP, it was a bit strange that Sega had stayed quiet on European and North American releases. Well, it's now confirmed that Puyo Puyo Champions will release onto the eShop on May 7th.

The new version includes visual tweaks, a tournament mode and an improved replay system as well as being structured entirely around online play. You can find out more on the official site.

As noted over on GoNintendo, Nintendo has updated their brand website and have taken the opportunity to remove a mass of information from their website. For a start the Wii, DS have had their games removed from the site, but perhaps most notably the WiiU information has also been archived.

Arguably this is to be expected as the current generation continues and the Switch continues to sell well. The fact that Nintendo are doing housekeeping on their website infers that they have something else in the works — maybe those rumoured new console versions. 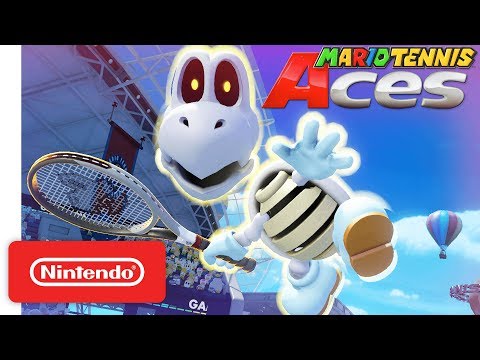 Nintendo have announced that the Dry Bones character will be available for all players from the 1st of July, with players who enter the online tournament unlocking the character early.

Dry Bones will be unlocked for those who decide to join next month's online tournament, which runs from the first of May. Meaning that current owners can get access to the character up-to a month before non-tourney goers.

If you're still unsure about Mario Tennis Aces, last week also saw a downloadable demo of the game go live on the Nintendo Switch eShop. 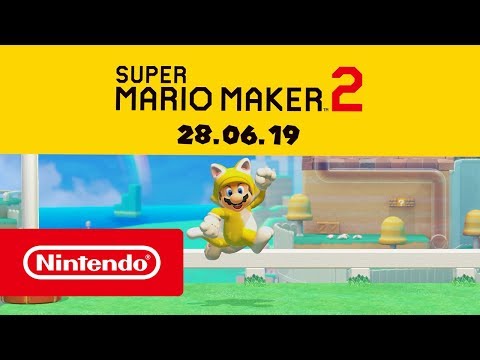 The eagerly anticipated Super Mario Maker 2 will release on the 28th of June, Nintendo has confirmed.

Originally announced back in February of this year, Super Mario Maker 2 definitely remains one of the most anticipated titles for the Nintendo Switch, While we don't know much about the changes, slopes being added into the mix is absolutely massive news. A quick peek at the announcement trailer allows us to see transparent pipes, new enemies and features from the Wii U game Super Mario 3D World.

In a recent Nintendo financial report, as highlighted by Nintendolife, Nintendo confirmed that over a million units of the Labo Variety Kit have sold. It's an impressive number and shows that the cardboard peripherals can do well, and this is before we take over kits into consideration.

With an established audience of this size, hopefully we'll start to see more third parties working with them. It also bodes well for the Nintendo Switch Labo VR, something we've discussed quite regularly over the last while including how we believe that releasing more games for the platform will see a greater adoption rate. We put our our plea for a Labo VR Pokemon Snap, and put out a list of 12 IPs which would work fantastically with the tech.

American Fugitive to break free in May 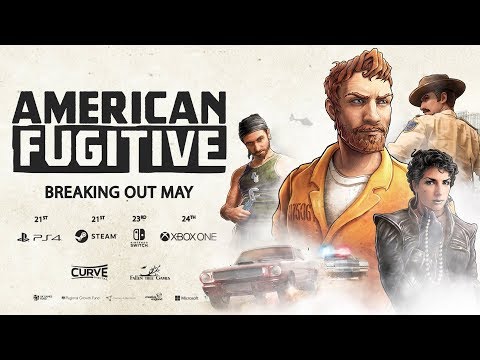 We've not mentioned American Fugitive here before. It's an open-world crime sandbox from some of the minds behind Goldeneye and Timesplitters. Fallen Tree Games has created a visually impressive, top-down crime sandbox which follows the story of a jailbreaker out to solve the crime he was wrongfully arrested for.

There's definitely an early GTA vibe to American Fugitive, albeit one enhanced with years of technology and a ton of Hollywood influence.

It's launching on May 23rd for the Nintendo Switch,

Here's a few select releases from the last week: 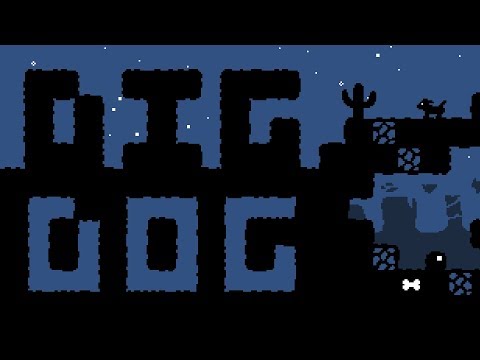 On first look Dig Dog appears to be a platformer with a well-refined pixel-art style, however beneath the surface it is a very clever roguelike with a big focus on timing and terrain deformation.

There's something else about Dig Dog which is very impressive, it was coded without hands. The developer used a their voice to code the entire game, and used a hat and pedal combo to create all of the artwork. Not that you could tell this, of course, the game controls tight and is very well made. 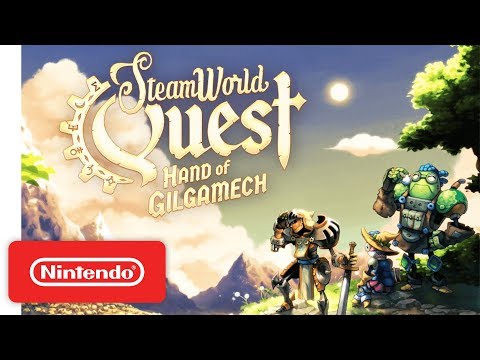 Steamworld Dig's RPG cousin released late last week, and it's definitely one to pick up if you're a fan of classic JRPGs. The steamworld universe might have started out as a digging-platformer, but over the years the setting has become refined enough that Hand of Gilgamech's lore can hold its own against most RPGs.

Its battle system is a very fun take on card-based combat, although what really shines through in the game it it's artwork. Thunderful have truly come into their own with their art design. 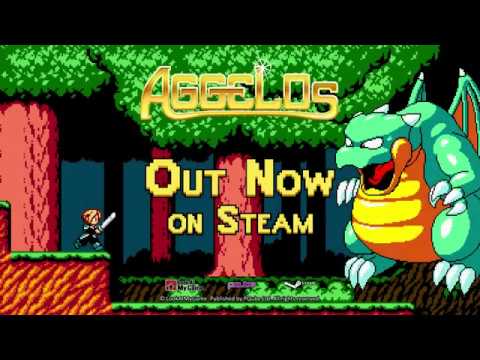 I've been following the Brazillian-made Aggelos for almost all of my writing career. The Wonder Boy inspired metroidvania has been in development for many years, however it is finally coming to Switch with some help from publisher PQube.

Wonder Boy was, for me, the true peak of early adventure titles, combining exporation and light-RPG elements within the 2D platformer plane. In many ways it was doing the things that Metroid and Castlevania would later be praised for a generation ahead. We've reviewed the recent remaster of Wonder Boy III: Dragon's Trap, and celebrated its design.

Aggelos is a successor to the Wonder Boy series, however, instead of focusing on upgrades to visuals the developers have concentrated on creating a game with a greater focus on abilities and level diversity. Things like triple jumps are in, as well as different types of magic, and it is all done in a retro-style which clearly betrays the developer's influences. 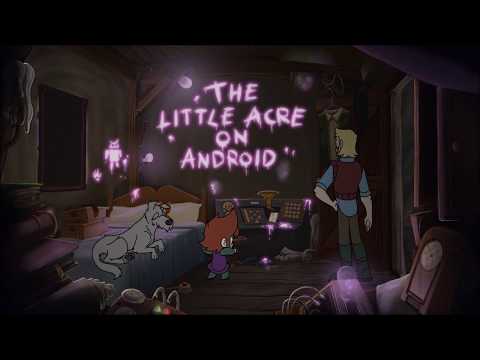 Finally it's The Little Acre, a point and click adventure game which originally released on PC a few years back. It follows the story of a father-daughter combo who discover a new mysterious world with strange ties to their family.

It's a really heartfelt little adventure game and holding it all together is the Don Bluth inspired art style. The art makes it feel like there's always something extra to find in every scene which is a great feeling to have in a game of this type, There's also a ton of little critters in the game, something that the Bluth design-style always lends itself well to.