As you survive in Minecraft, you will regularly encounter mobs that attack from a distance. For example, the most common mobs are archer skeletons, which can even attack in groups. Of course, the list of such enemies is bigger. For example, there are also ghasts and blazes. And anyone who fights these mobs has a logical question: how do I protect myself against them?

Of course, you can use a shield or get powerful diamond armor. However, over time, this will not be enough. Therefore, the only reliable way to defend yourself is to use the Projectile Protection Minecraft enchantment. However, these enchantments have their own distinctive features that you should be aware of before deciding to cast them on items.

WHAT DOES PROJECTILE PROTECTION DO IN MINECRAFT?

A key feature of the Projectile Protection enchantment is that this enchantment significantly reduces the damage the character takes from arrows and any other projectiles.

For example, this list includes not only skeleton archers but also ghasts and blazes. Thanks to the Projectile Protection enchantment, you can reduce the damage taken by as much as 90%. However, achieving this number would require that all armor had level four enchantment applied.

HOW TO GET PROJECTILE PROTECTION ENCHANTMENT THROUGH THE ADMIN PANEL? 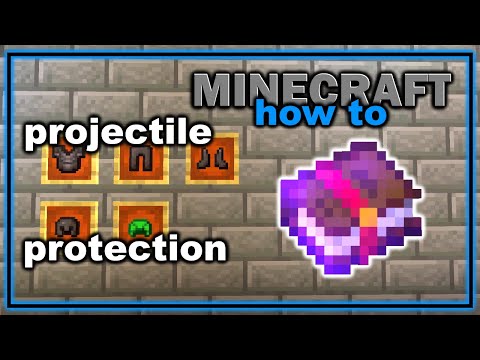 You can get the Projectile Protection enchantment not only in the usual game way or with the help of mods, but also thanks to the administrator mode with the appropriate commands. The only difference is that the enchantment will already be applied to a certain item, but if you wish, the desired item can also be pre-selected.

The main thing before you decide to use the admin panel is to make sure that the use of cheats is allowed in the world. Otherwise, nothing will work. As a last resort, if you can’t open the admin panel, just create a new world.

If the commands still cannot be used for unknown reasons, then we recommend using Command Block. The selected command should be written inside it. And in the future, it will activate by itself, as soon as the command block receives a signal from the red stone.

This is everything you need to know about Projectile Protection in Minecraft. While you are here, take a look at our guide on Bane of Arthropods in Minecraft.

Next Up :
Five Nights at Freddy's: How many FNAF games are there?