Heading to both platforms very soon

Maze Machina is an upcoming puzzle game from Tiny Touch Tales for iOS and Android. If you're not familiar with the developer name you're almost certainly familiar with some of their titles, which we've frequently enjoyed here over the years. Card Crawl and Enyo are just a few of the stellar games this team has created.

It's perfectly reasonable to get excited about Maze Machina then, particularly since it's all presented with a clockwork themed art style that looks fantastic. Originally announced last year, Maze Machina has been in beta for some time now and it's looking to be heading closer to a full release very soon. 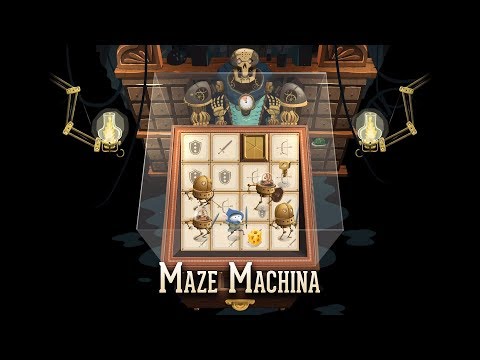 The gameplay itself is a turn-based puzzle affair that's controlled through swiping. Players take control of a little rodent hero who has been trapped by the evil Automatron in a mechanical labyrinth purely for its own amusement. Now it's up to you to help our tiny hero escape by using the tools you'll find in there.

The labyrinth is represented by a 4x4 grid which is populated with enemies, an exit, a key for said exit and various different tile types. The aim of each level is to make your way over to the key, pick it up and then unlock the door to escape that part of the maze. Of course, the enemies will do their best to stop you.

As Maze Machina is turn-based you'll have to plan ahead before making each move. Working out where the enemies will be going and if that would pose a threat to our hero. You'll also have to consider the tiles themselves with each one offering an array of weapons, traps and other actions that might make getting through the labyrinth a little easier.

Maze Machina will head to both the App Store and Google Play very soon. It will be a premium title that will cost $1.99.

Top 25 best puzzle games on Android
Next Up :
Touchgrind Scooter is out now on Google Play, letting players test their scooter-iffic skills on Android