Kabam’s mobile superhero RPG, Marvel Contest of Champions, just received the v35.1 update that introduces two new heroes, challenges, story updates, features, and a lot more. Additionally, Contest of Champions is also celebrating Pride Month by collaborating with the iconic comic artist Derek Charm, who has created a wallpaper with all of Marvel’s beloved LGBTQ+ characters like America Chavez, Iceman, and Black Cat. If you’ve seen the artwork above, you may have noticed a few new heroes hidden within it, two of whom are part of this update. 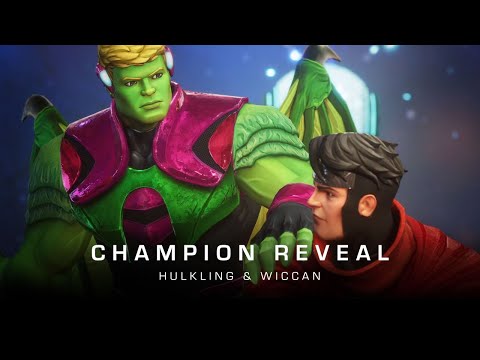 Marvel Contest of Champion’s latest update will feature Wiccan and Hulkling who will arrive as playable characters this month. Wiccan, who also goes by the name Billy, is the Scarlet Witch’s son born out of her Chaos Magic. He discovered his wizarding abilities when he joined the New Avengers. On the other hand, Theodore Altman or Hulkling, always thought he was a mutant with super-strength and shape-shifting powers. It is only revealed to him later that he is a unique hybrid between Kree and Skrulls, and is a member of the Skrull royal family. Hulkling goes on to become the King of Space and wields the mythical sword Excelsior.

The two new heroes will join America Chavez in an event called America’s All Stars where they will face loads of challenges every week. Friends can also help out in its completion so that loads of rewards can be accumulated. This month’s Legacies story is also centred around these two as Wiccan and Super-Skrull embark on a journey to find Hulkling who has been kidnapped by Ronan The Accuser. Hulkling will enter The Contest on June 16th while Wiccan arrives on June 30th. Players will however have a chance to add one of them to their squads for free before July 6th.

Which one of these champions will you add early? Also, if you hadn’t realised yet, the third hero who is part of the artwork but hasn’t been added yet is Valkyrie. Download Marvel Contest of Champions now for free on the App Store and Google Play.

Also, check out the best superhero games to play on mobile!
Next Up :
Fighters of Fate is an upcoming CCG-slash-RPG that's now open for pre-registration