Peter Parker and Miles Morales will always be the Spider-Men of now, but who will be the savior far away in 2099? The savior’s name is Miguel O’Hara, and he is known as Spider-Man 2099; and he is swinging into the world of Marvel Contest of Champions.

A brilliant geneticist in the year 2099, Miguel O’Hara finds his DNA spliced with that of a spider through experimentation. This causes him to end up with powers like the original Spider-Man such as superhuman agility, strength, and wall crawling. Where he shines is the ability to create his own webs, he has retractable claws, and his spider-sense has been replaced with a hyper-active vision. 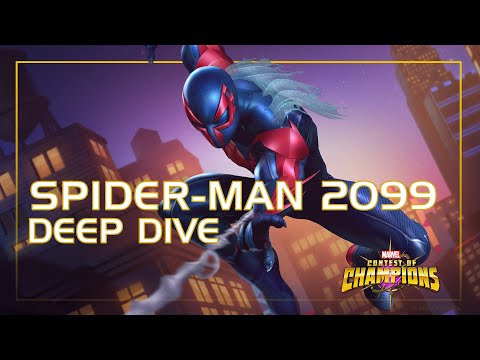 Spider-Man 2099 is a Science class character and his base abilities include Rupture, Wither, Exhaustion, and Resistance Up. Where our hero shines is against opponents with Power Gain because his Wither is strong enough to negate any Power Gain effects. He can stack multiple debuffs on the enemy with the help of Resonate and Despair.

Like two sides of a coin, if the opponent manages to neglect all debuffs, then Spider-Man 2099 is rendered weak since he needs those debuffs to deal higher damage. Damage over Time effects are also his bane as he has no real resistance to them.

Overall, I’d rate him as a pretty good character provided you provide him masteries for Resonate and Despair to constantly stack debuffs.

A new event is coming soon because Mister Fantastic has picked up some interdimensional activities and you must figure out what’s up. The champions seem to have become mirror versions of themselves…

There have also been multiple fixes implemented on champions to smoothen out any issues with them and to squash all the bugs. Check them all out on the official website.

Download and play Marvel Contest of Champions for free on the iOS App Store and Google Play Store.

Also check out the 25 best fighting games for mobiles!
Next Up :
Moonlighter Android arriving soon, as revealed in our LaunchPad stream