Pride cometh before the fall. The Future has arrived.

It is time to welcome two new champions to the Battlerealm of Marvel: Contest of Champions. So, put your hands together for Kitty Pryde and Nimrod!

Kabam has also released a new motion comic titled X-Men: Future Shock for Marvel: Contest of Champions that features both Kitty Pryde and Nimrod. You can find out more about them by reading the comic! 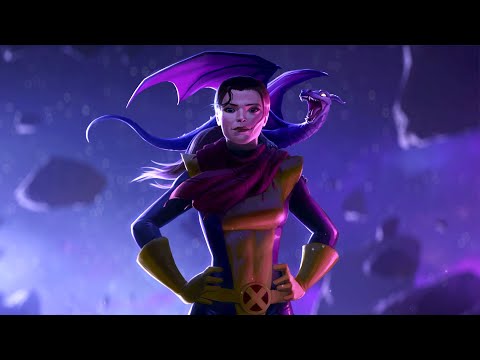 This seems to be a tough month for Marvel: Contest of Champions. Tensions have been rising between the Clan Akkaba mutants, who are worshippers of Apocalypse, and the people of Krakoa, which is the mutant-only island nation of Professor Charles Xavier.

The rift between these two clans continues to deepen through sabotage and subterfuge and an innocent Kitty Pryde has all the blame put on her. All the heinous crimes that have been committed by others, are somehow now Kitty Pryde’s fault.

She teams up with Wolverine to uncover any leads they have and as more things come to light, you’ll realize that there is so much more to this story than someone just trying to drag Kitty Pryde’s name through the mud.

Here’s some backstory on both the characters to bring you up to speed with them.

Katherine “Kitty” Pryde was your average teenage girl until she began getting uncontrollable and painful headaches because of her emerging mutant powers. Seeing this, Phoenix used her powers into convincing Kitty’s parents to send her to Xavier's “school for gifted youngsters.” Soon enough, Pryde was the youngest member of the X-Men. She encounters a small alien-dragon in her way called “Lockheed” who becomes her companion.

Nimrod is the ultimate sentinel who was created in a timeline where the X-Men were destroyed. When he realized that there are no more mutants left to destroy in his timeline, Nimrod began to jump into alternate timelines to complete his one task wherever he went- to end all mutant life.

Both these characters will make their way to Marvel: Contest of Championsin September. You can download the game now for free on the iOS App Store and Google Play Store.

Click here to find out some more fighting games you can play on mobile!
Next Up :
Everything you need to know about eFootball's newly revealed gameplay