Kabam's popular mobile fighter Marvel Contest of Champions has announced its next big content drop, this time taking bits and pieces from the upcoming movie, Thor: Love and Thunder. This update’s primary addition comes in the form of two brand new champions related to the film; Gorr and Valkyrie, alongside a celebratory event with a few free handouts related to Thor as well.

Let’s go over those two new champions first. To begin with, we’ve got Gorr. Gorr The God-Butcher grew up in a harsh world, where his people’s firm belief in their gods kept them from falling into despair. But after his family died due to the harsh climate of his world, he became full of rage and not so faithful, leading to him swearing vengeance upon those same Gods that never came to their rescue. After obtaining the power of the Necrosword and the ability to control dark magic, he now acts as an executioner for those who call themselves Gods. 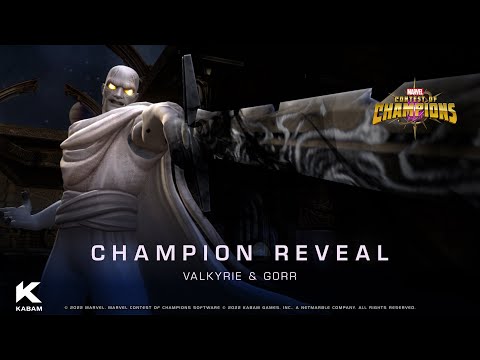 Valkyrie, on the other hand, is a more heroic figure. Taking inspiration from the mythical angelic figures of the same name, Valkyrie is the former leader of the mighty Valkyrior, and recently crowned sovereign of New Asgard. She possesses superior strength, even compared to other Asgardian warriors, and is an excellent leader. Though sporting an equally tragic loss, she takes the high road compared to Gorr and exists solely to protect the Asgardians of the Battlerealm.

Gorr will be arriving in Contest of Champions on July 14th, while Valkyrie will be added on July 28th. On top of these additions, on July 8th, the same day the new Thor movie drops, all new and existing Contest of Champions players will be able to add either Thor (Ragnarok) or Thor (Jane Foster) to their rosters for absolutely free. So, whether looking forward to the new movie or just an already existing Thor fan, there’s a lot to love with this new update.

Looking for more fighters on the go? Check out our Top 25 best fighting games available on Android!
Next Up :
Final Fantasy: Record Keeper set to cease service and updates later this year