Apple might approve a new Flappy Bird clone every 24 minutes, but it has rejected a parody game where you troll a fake app store and send cease and desist emails to developers who are using your various trademarks.

Intern Saga: Trademark Lawyer is the brainchild of Organ Trail developer The Men Who Wear Many Hats (TMWWMH).

According to the game's site, TMWWMH made the game "in protest of [Candy Crush Saga developer] King.com being assholes, app stores being lazy and the messed up trademark system".

It was made for the Candy Jam, an online game jam during which indie developers made candy-themed games to protest against King and its attempts to trademark the word 'candy' in video games.

King has since abandoned its efforts to plans to claim ownership of the term in the US. It still has a trademark for the word in Europe, though. 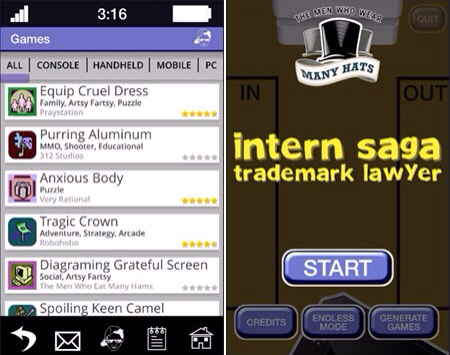 In Intern Saga: Trademark Lawyer itself, you have to sort through a list of randomly generated games and try to find ones that infringe your ever-growing cache of trademarked words.

You then send cease and desist email to the creators of said infringing games, and punch out to collect your earnings.

After a month in Apple's approvals queue, however, TMWWMH says the game was rejected. An Apple employee told the studio that "the concept of the app is not the sort of app we want in the App Store."

You can play the game online, though, and on Android (where it's been available for almost a month).

But like the games on this ever-increasing hit list of satirical and thought-provoking games, Intern Saga: Trademark Lawyer won't be available on the iOS App Store.