Goddess of Victory: NIKKE's festive winter update - Everything you can expect and more

Now downloaded in the tens of millions from both the iOS App Store and Google Play, Goddess of Victory: NIKKE has captivated anime fans and strategy enthusiasts in Japan, South Korea, and North America since its initial launch in November.

After 2 beta tests that paid close attention to feedback from players, the game is now ready to launch its massive winter update, where fans can look forward to limited-time in-game events and bountiful goodies this month. 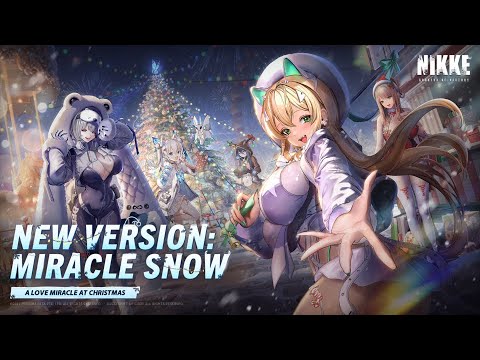 Boasting both English and Japanese voice-overs, the game is also an auditory treat, especially with its official theme titled <>. Written by Sawano Hiroyuki of Attack on Titan fame, the soundtrack's PV has been watched by over 6 million commanders. Players can also expect to join in on a forthcoming global event with the #NikkeGachaHeart hashtag, now with more than 19.7 million impressions.

Goddess of Victory: NIKKE is also currently enjoying a wave of positive sentiment throughout its communities in response to its winter version update. Commanders can’t wait to join this Christmas Party with NIKKEs!

The game boasts a perfect blend of anime-style visuals and narratives with casual shooting, making for an action-packed experience in real time. The high-quality 2D art complements the overall aesthetics of the title, with talents from Shift Up’s Kim Hyung Tae (illustrator and game designer of NIKKE and Stellar Blade).Commendars can also enjoy an accessible aiming system along with a special firing adjustment for left-handed gamers, all presented in a convenient portrait orientation that commanders can pick up anytime.

Holiday festivities during the winter update

From December 8th to the 28th, the Miracle Snow event will let players experience the beauty and wonder of snowfall at the outpost's amusement park. Commanders will follow the tale of N102 whose memory resets every morning, but for some unknown reason, her memory remains during this "Christmas miracle". As such, both Rupee and the commander take the initiative to craft beautiful memories for her to discover what it means to be human.

A special login bonus will give away in-game goodies along with the event, where players can check in daily for 14 days to score the new SR character Neve, Advanced Recruit Voucher x10, development materials, and more. Clearing the event stages will also reward players with the Snowflake Crystal event item, which can be used during the mini-game to nab more rewards.

New characters and limited events are in store for players

Shopaholic Rupee: Winter Shopper is an SSR rarity character with an AR weapon type, while Neve is an SR SG weapon type attacker who's exclusively available during the event. While trying to obtain these two new additions to the roster of characters in the game, players can also take part in the #FirstChrismaswithNikke social media event where they can share content about the game to win prizes.

For instance,commanders can share in-game memories with NIKKE, as well as Christmas activities they wish to do during the season. The best posts will be rewarded, of course, which you can learn more about on the game's official Twitter page. On the other hand, the #StepForwardCommander Content Creator Competition is currently underway, letting players submit their masterpieces to win a whopping 15000 gems.

The appeal of Goddess of Victory: NIKKE

If you haven't joined the bandwagon just yet, you can not only look forward to casual shooting action but also a lush post-apocalyptic world that combines roguelike elements, exploration, puzzles and co-op battles across various game modes. Goddess of Victory: NIKKE also features card-collecting elements that vary depending on combat styles.

In particular, there are 6 types of gunplay based on the NIKKE's specialities, which include the mid-ranged AR (Assault Rifle), the RL (Rocket Launcher) for crowd control, the long-distance SR (Sniper Rifle), the short-distance SG (shotgun), the rapid-fire SMG (Submachine Gun), and the mid-range heavy artillery of the MG (Machine Gun). Character strategies also depend on squad roles such as Explosive type, Support type and Defence type.

What's A Preferred Partner Feature?
From time to time Steel Media offers companies and organisations the opportunity to partner with us on specially commissioned articles on subjects we think are of interest to our readers. For more information about how we work with commercial partners, please read our Sponsorship Editorial Independence Policy.
If you're interested in becoming a Preferred Partner please click here.
Next Up :
App Army Assemble: Opus: Echo of Starsong - "Does this narrative-driven adventure keep you gripped from start to finish?""

Goddess of Victory: NIKKE tier list and a reroll guide