A new update for Genshin Impact is releasing in the next two weeks. miHoYo has just announced the adventure RPG’s v2.5 update called When the Sakura Bloom goes live on 16th February and will bring major changes, especially to the newly unlocked Enkanomiya region. The update also furthers the story of Raiden Shogun and the launch of Yae Miko as a five-star character alongside her story quest. Check out the trailer for When the Sakura Bloom below: 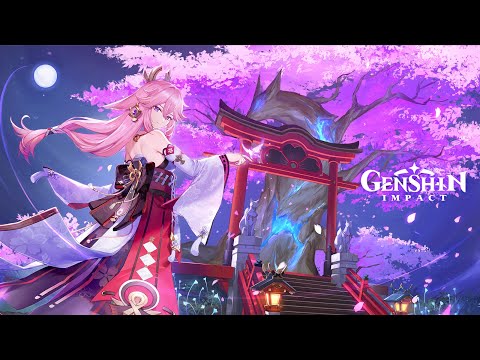 The update introduces a new season event called Three Realms Gateway Offering set in Enkanomiya. A part of the hidden land has become haunted by darkness and players will begin to accrue it as well when they enter this area. A new Bokuso Box will be required as it is the only way to resist this corrosive darkness. The gadget can be upgraded by opening chests, unlocking waypoints, and completing objectives. Adventurers have the entire season to finish all challenges and earn the Oathworth Eye, a new four-star catalyst weapon.

Surviving in Enkanomiya will also become more challenging with new enemies like Standard Bearers, Line Breakers, and Defenders of the Shadowy Husk family showing up. These foes are all unique in terms of their weapons' elements and abilities. For instance, Standard Bearers can conjure shields for themselves and nearby allies.

Another event coming with this update is Divine Ingenuity, which will allow players to form their own domain that features different kinds of terrain, mechanisms, traps, buffs, and completion criteria. All player-created domains will be available for others to try out.

Get ready for the Sakuras to bloom by downloading Genshin Impact for free on the App Store and Google Play.

Next Up :
Dungeon and Gravestone is a revamped roguelike dungeon crawler by a solo indie dev from Japan