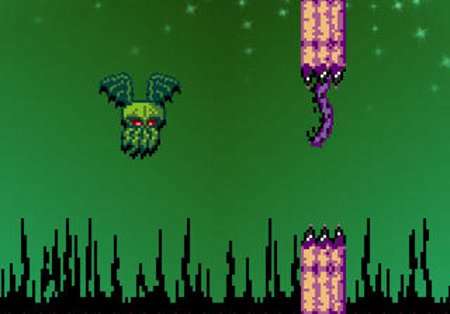 If it turns out H.P. Lovecraft was right and Cthulhu is slumbering under the waves in the sunken city R'lyeh, I wonder how the giant tentacle-faced monstrosity might feel about being the star of the latest Flappy Bird imitator.

FlapThulhu: Flappy Madness is its name, and it's developed by Madgarden, the dev of the glorious Gold Award-winning Punch Quest.

The fact that this game, which sees you leading a painfully adorable pixel-art version of Cthulhu through spiked gaps in the architecture of his subterranean realm, even exists makes it look like Apple has relaxed its rules on games with the word 'flappy' being refused entry to the App Store.

It's infuriating in a similar way to the screen-tapping pipe dodger that inspired it, but it's probably the best of the games that have taken their cues from Dong Nguyen's dearly departed avian avoider.

If you like your madness slightly more overt and your single-finger arcade flappers to be dripping with gloop and covered in terrifying non-Euclidean spikes, then you're weird. But you might like FlapThulhu: Flappy Madness.