Diablo Immortal opens pre-registrations ahead of release this year

The incredibly anticipated mobile ARPG Diablo Immortal has officially opened pre-registrations ahead of the game’s planned global launch later this year. With this being the mobile adaptation of the critically acclaimed Diablo series, many fans are eager to get their hands on it and this is a step closer to doing just that.

If you somehow haven’t heard, Diablo Immortal is an upcoming action role-playing game from world-famous developers Blizzard Entertainment. It aims to emulate the same experience the PC/Console versions of the popular franchise offer but in your pocket this time around. There’s been a handful of gameplay previews, and we’ve even got a few early tips up ourselves. 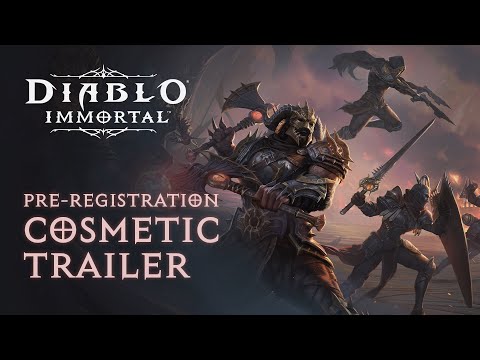 Of course, with pre-registrations opening up, rewards are being offered if Diablo: Immortal manages to hit the 30 million registers mark. What’s being offered is a cosmetic armour set that you’ll be able to wear on top of whatever gear you may pick up throughout the game called The Horadrim Cosmetic Set. With a sort of grimdark fantasy warrior, fitting for the setting, look, this cosmetic set is honestly pretty darn cool, so be sure to get that pre-register in and get everyone one step closer to unlocking it.

If you’re looking to do exactly that, you can pre-register for Android on Google Play as usual, and iOS users can find it on the App Store as well. Of course, if neither of those is your speed, you can also just head over to the official website as well and sign up there. Regardless, Diablo: Immortal is likely the biggest mobile launch this year and has a lot of eyes on it, so get those registers in and get ready to hack, slash, and loot later this year.

Looking for another fantasy RPG to play while you wait for the Diablo: Immortal launch? Check out our Top 25 RPGs available for iOS devices!
Next Up :
Pokemon Go's next community day will be titled Memories of Mudkip