In wonderful news for all of the foodies out there, the recently launched and massively popular Diablo Immortal has announced that they are hosting a crossover with the fast-food chain Burger King in Korea to release a brand new food item as well as an in-game event too. This new menu item will be available specifically within Korea and will also allow you to access in-game rewards as well.

While this may seem a bit odd of a crossover, it’s not the first time Blizzard has created a new food item to celebrate the release of a Diablo game, as back when Diablo II: Resurrected dropped, they created a beer that was brewed specifically in honour of the title. This time, however, the new menu item for Korean Burger King stores also comes with a few in-game goodies as well, so you’re definitely getting a good bang for your buck. 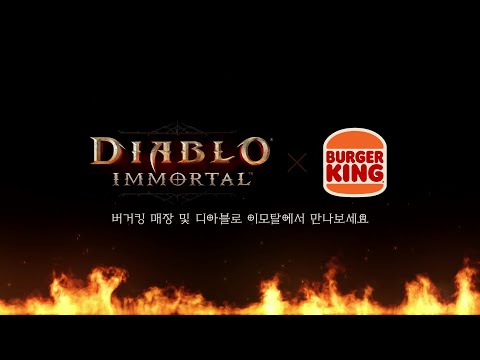 For those of you curious as to what this new burger looks like exactly, the Diablo Ultimate Donut King as it is named will have doughnut-shaped chicken patties along with a beef pattie. Then, you’ve got your umami added with a specially prepared new sauce entitled the Diablo Sauce. It’s a safe bet with that name that this is likely to be a bit on the spicy side. Add all those ingredients to your normal burger toppings and you’ve got the new Diablo Ultimate Donut King available in Korean Burger King stores.

But enough about the food, let’s talk about what this means for the game itself. If you head over to the collaboration site, not only will you be able to grab yourself a free coupon for this new menu item, but you’ll also find the Diablo Immortal Goods Lucky Relay Event, which is where you’ll be finding the in-game rewards that will then be supplied to your mail within the game. These range from a wide variety of things, from gear to premium currency to new weapons as well. There's also the chance to grab a fair few real-world items as well, like headphones, a statue of an in-game villain, and more.

While this collaboration is likely not the first idea you might have had for a Diablo crossover effort, it is honestly quite the extra mile to create an entirely new menu item at one of the biggest chains in the world just to get the word out about your new mobile game, so I’m a tad impressed with Blizzard. It’s clear they intend to spread the word about the much anticipated ARPG’s release to just about everyone.

And if you yourself are looking to get started with Diablo Immortal and see what all the fuss is about, you can find it available for free on the App Store and Google Play. As for the new burger, we’ll have to see what Korean audiences are saying about it in the next few days.

Are you looking for more ARPGs to lose yourself in? Check out our Top 10 best of 'em available for Android!
Next Up :
Sword Master Story reaches over 4 million downloads and plans to host a variety of events to celebrate