In Blizzard's latest effort, there are so many things to look at. It's not your standard Diablo layout, so you might not be sure where to start. Our Diablo Immortal beginner's guide will be handy then, so scroll down to read seven starter tips that everyone should know before jumping into the game.

There's a good chance you've read or heard something about the crowd's reaction at that now-infamous Blizzcon when the developers announced their plans for Diablo Immortal. Four years have passed since that day and a lot of things have happened in the meantime, but with this and that, Diablo Immortal is finally available for both Android and iOS as well as for PC.

The fact that the pre-registrations have already exceeded 30 million, is just a reminder that regardless of what is going on with Blizzard and the way they operate, the Diablo franchise will always have a huge following.

It doesn't really matter if this is your first time playing the game, or you are someone like me who's playing Diablo since 1997, there are always some small things you wish you knew beforehand. How often have you done something in the early stages of any game that you regret later on? It's something that has happened to every gamer. There is a way to avoid doing all these 'mistakes' in Diablo Immortal though, and that's what we are going to talk about in this article.

Of course, there might be certain tips that are class-exclusive, but we are not going to cover them here. Instead, we are going to talk about general tips that affect every player, regardless of their chosen class.

With that out of the way, let's get right into the beginner's guide for Diablo Immortal.

1
Only have one character 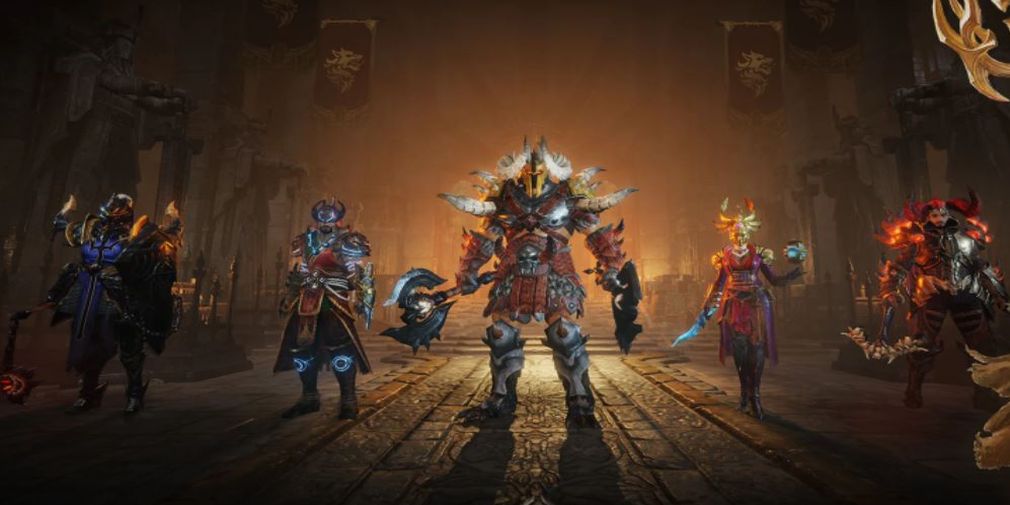 If you are someone who's coming from a game like let's say, Lost Ark, for example, you are probably used to having a number of alts that you can farm with, and then funnel all the resources into your main character. Well, for better or worst, Diablo Immortal isn't like that. There's no gold that you can share between your characters or any other type of resources for that matter. Because of that, there's no benefit in having multiple. Instead, it is much better if you invest your time and effort in levelling up a single character.

If you want to get a feeling about how each class plays in the game, it would be wise to do it only for the early levels. Later on, upgrading gear becomes challenging and it simply is not worth the effort.

2
Enable the auto pick up feature 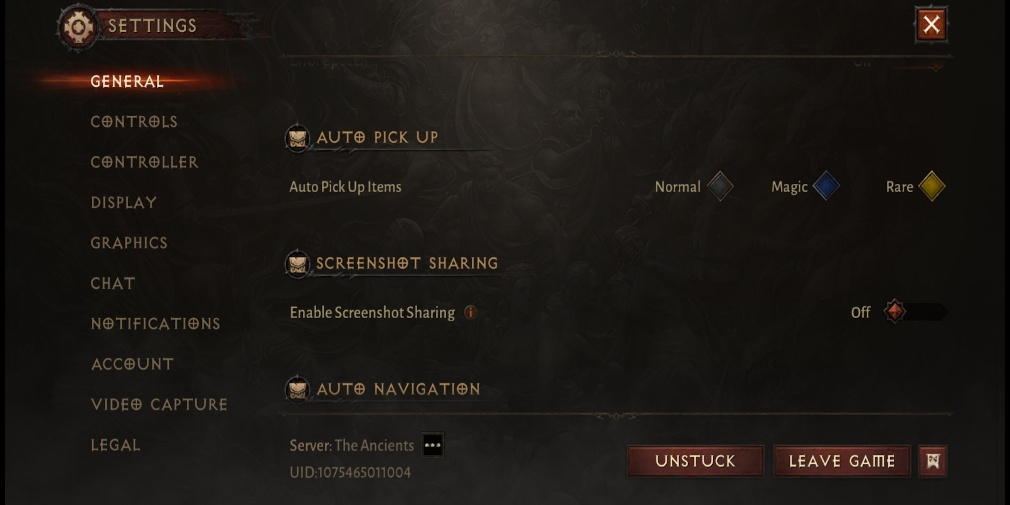 Something that is very simple, yet can make a huge difference in your gaming experience, is the auto pick up feature. I don't understand why this isn't enabled by default in the first place honestly, but anyway, here's how you can enable it.

This might seem like a minor detail, but believe me, when you are in a dungeon fighting boss with other party members, the last thing you want to do is focus on picking up items. This feature will make your life much easier. 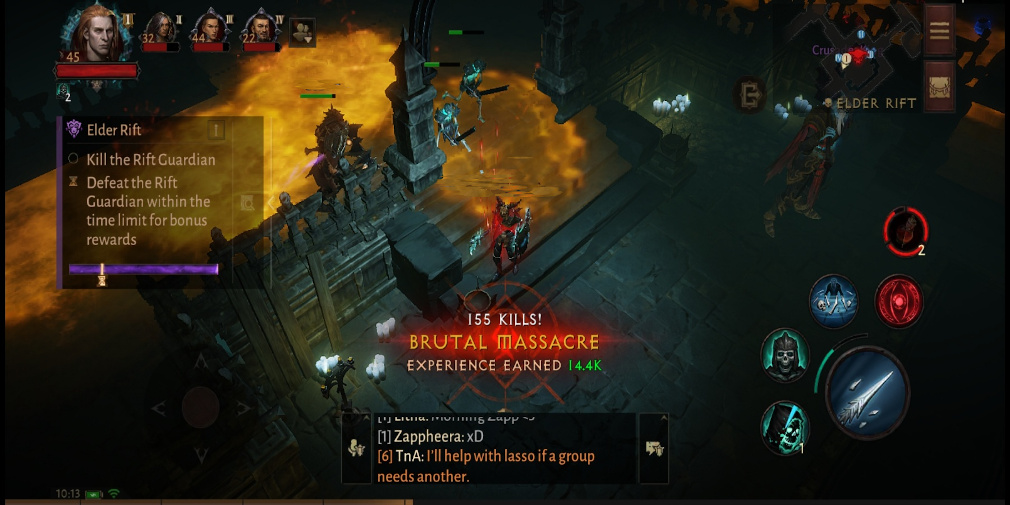 Something that many new players don't seem to know is the importance of killing streaks, especially in instances where there are no roadblocks. OK, so how does it work and why is it important to know about it? In Diablo Immortal, killing streaks grant extra experience. The longer a streak is, the more experience you can get. To give you some perspective, if a kill streak is let's say, 20 mobs, the extra experience will be something like 600 or so, but if you manage to put together a bigger one, over 100 mobs, your bonus exp will be over 10k.

That amount of exp in itself might not seem that big, but if you keep doing it over and over, it adds ups to great numbers. How you can do it? It's simple, keep it moving. Hit some mobs to take aggro and continue moving to lure new ones. In a party setting usually one or two people run up ahead to lure new mobs while the other members finish them off.

If you are an experienced RPG player then this is something that you already know, but this is an article for everyone, so it is worth pointing out that you shouldn't waste your resources, especially if you are planning to play as a "F2P" player. During the early levels, you should be able to just get by with whatever gear you pick up from your quests and dungeons (which should be more than enough.) Save everything for the end game. 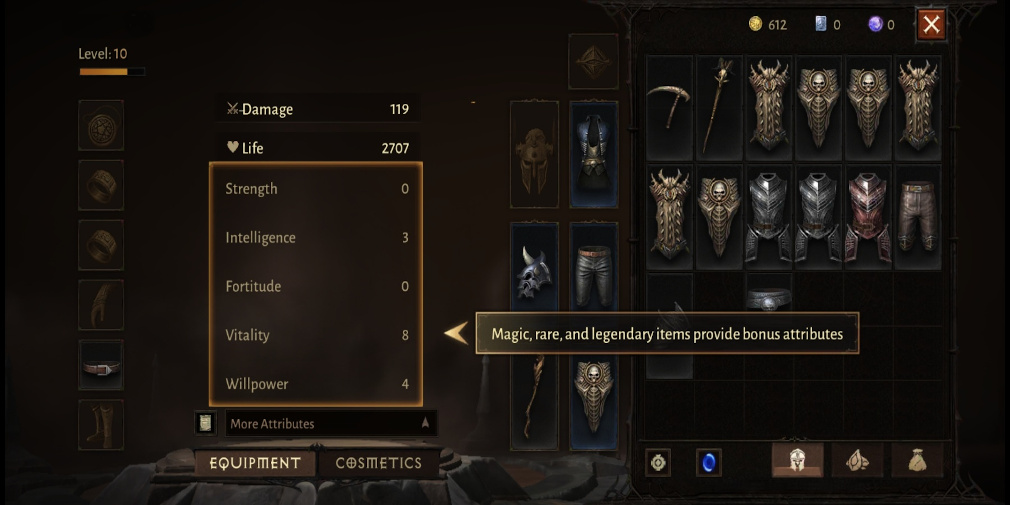 Your endgame equipment will be of 'Legendary' rarity, but to upgrade it, you are going to need a ton of materials and gold. With the auto-pick up feature enabled, you are going to end up with a ton of gear in your inventory after each Dungeon run. Obviously, not all of them will be better than the ones you currently have, but especially during the early levels of the game, that will often be the case. A green arrow pointing up will indicate a piece of gear that is better than what you have. Make sure to equip it to raise your combat score. As for the rest, make sure to salvage them at a 'Blacksmith'. As mentioned above, you are REALLY going to need the materials. 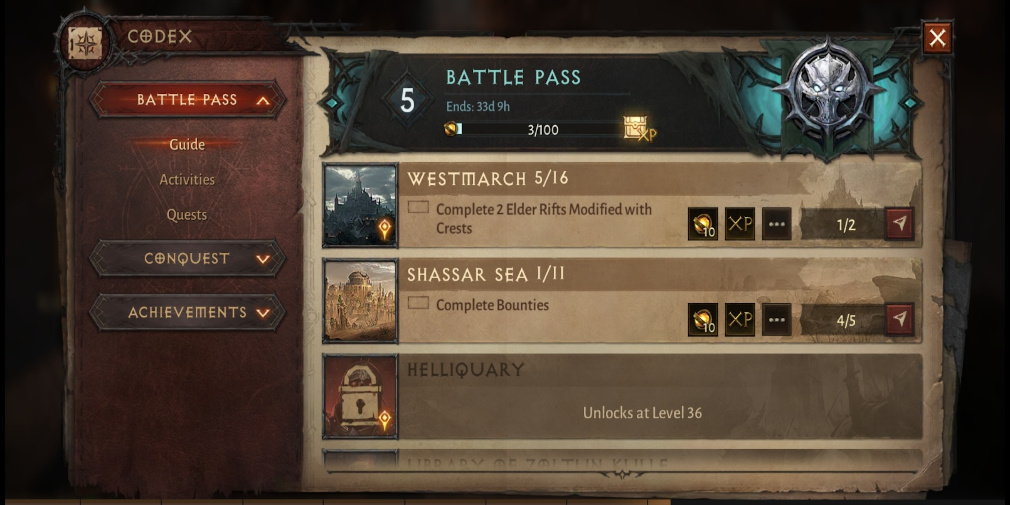 The battle pass is a great feature that will reward you with various prizes once you reach certain thresholds. That said, you should try and wait before you claim them for as long as you can. Why's that you might wonder? Well, you are going to hit a 'level wall' at certain points in the game. That means you won't be able to progress any further until you reach a certain level. That is when you should claim the rewards and get a great exp boost. This little detail can save you a lot of time and struggle later on.

By doing certain activities, such as completing dungeons, bounties and so on, you will earn battle points. Not all of them are worth the same amount though. In order to check that out, open your Codex and go to the 'Battle Pass' section. You'll see a yellow icon with a number which is the number of battle points you can earn. Keep in mind that some of them might grant you extra points for completing them. 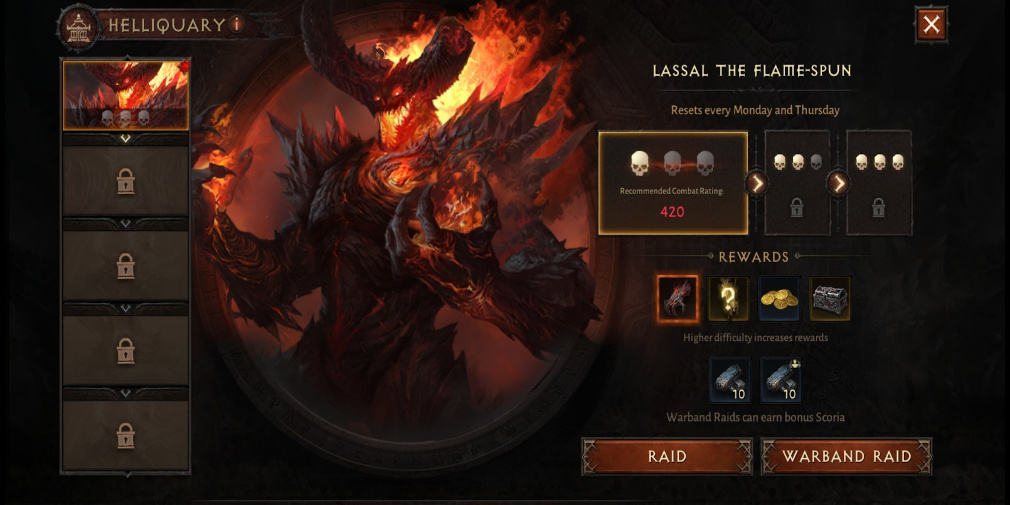 Even if you are more of a solo player, grouping up in Diablo Immortal has its benefits. Dungeons grant extra rewards as their difficulty level goes up for each party member. On top of that, it makes the run that much faster and smoother. And, you are going to have to do many runs to rank up your battle pass, so you'll save yourself a lot of time.

Joining an active Warband and clan is also very important, as you are going to need a party of 8 people to raid certain instances. While you are questing in the game zones, you will find random events as well as hidden dungeons. Always try to group up with other people and clear these zones and claim the rewards. 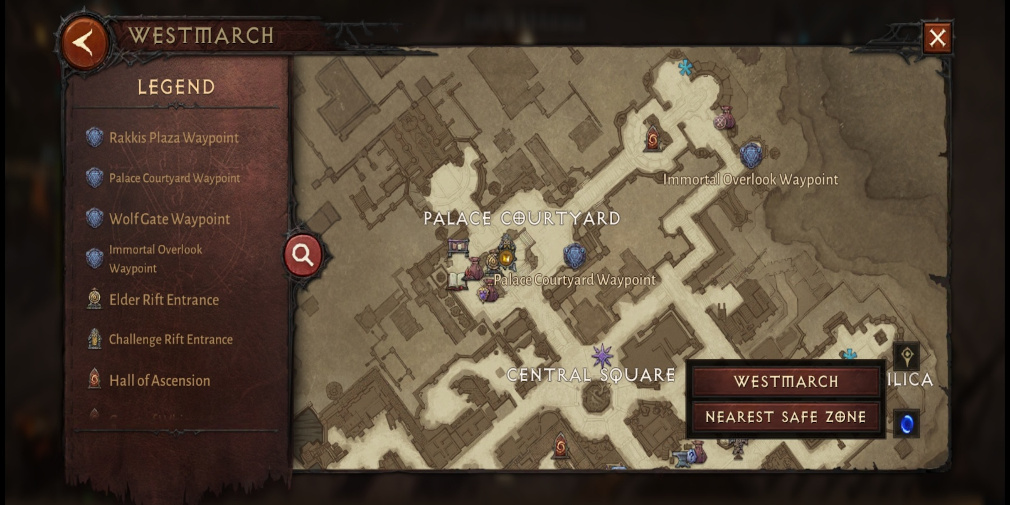 Make sure to use the auto-navigation feature, as it will make your game life easier. Open the map at the top right of your screen, tap on the place you want to go and let the auto-navigation do the rest. Also, whenever you are in a city and you want to find your stash or, a certain NPC, simply use the map 'Legend' feature and save yourself some time.

0/7
Next Up :
Diablo Immortal codes - Don't get your hopes up yet