The third season of Call of Duty Mobile, dubbed “Tokyo Escape”, is now live on iOS and Android devices after being teased earlier this week.

This new season of the mobile shooter brings all the content you’d expect to see: a Battle Pass, new operators, blueprints, maps, weapons, game modes and much more.

The Battle Pass offers both premium and free rewards just for playing through the game naturally and advancing through the tiers. Operator skins, blueprints, calling cards and CoD points are just a few things on offer for going through it, but if you don’t want to buy into it you can get the free operator skill Bull Charge that unlocks at Tier 14 and the revamped PP19 Bizon which is found at Tier 21. 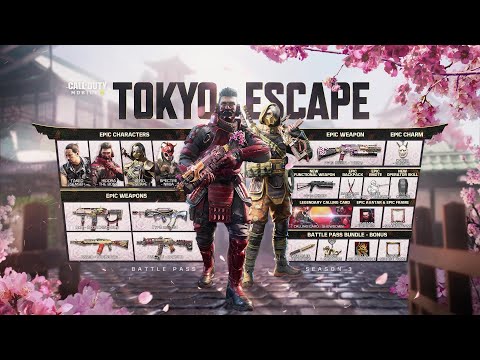 Two new maps have also arrived in the game: Oasis and Coastal. Oasis first appeared way back in 2011 with Call of Duty: Modern Warfare 3, and it’s set in a luxury desert hotel while Coastal takes place in a small war-torn town by the sea.

Night Mode maps are also being revamped in this new update, where you’re given a set of battery-powered night vision goggles with limited vision and must track the sound of enemy footsteps to predict where they’re located. There’s a brand new game mode too called Swords & Stones which will test your melee combat skills.

More content coming to Call of Duty Mobile during the Tokyo Escape season includes the new Spotter class for Battle Royale, seasonal challenges, and the two-week long exclusive Warrior’s Path event where you can earn even more rewards such as operator skins and weapon blueprints.

Call of Duty Mobile is available now to download from the iOS App Store and the Google Play for Android store, where it is a free to play game with adverts and in-app purchases.

Read more about some of our favourite shooters for iOS.
Next Up :
Boxing Star celebrates 4th birthday with a ton of free handouts as well as some new content