As we draw closer to the summer season, Nexon is set to host an event in Blue Archive to let players sunbathe under the shining sun with their favourite characters. This new beach-themed event, called Summer Sky’s Wishlist, goes live on February 22nd with pre-registrations already open. There’s lots to do and plenty of rewards to win. Nexon has also released a new roadmap featuring everything that will be added to Blue Archive in the coming months. Check it all out below.

Summer Sky’s Wishlist debuts an all-new storyline in Blue Archive that sees Sensei and the Trinity General School students take a much-needed vacation to the ocean-side. Players can get a taste of this summer vacation with a new swimsuit version of these characters available for a limited time. Pre-registering for the event will award everyone with some extra bonuses like 1,200 Pyroxenes.

Players can sign-up for the event through this dedicated website, where they must fill out the vacation request form by specifying their platform and email. A single person can only pre-register on one account. Registrations will remain open until February 21st, 14:59 (UTC+0). It's exactly like the forms you’d fill on a real field trip for school. After receiving all forms, on February 22nd, everyone will be off to Muigahama Beach led by the Trinity General School Justice Task Force. It is mandatory to finish all missions on the beach with Tsurugi and submit photos as evidence. 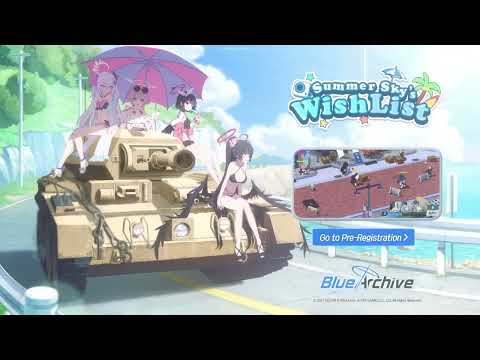 It's quite the spring to look forward to. Download Blue Archive now for free on the App Store and Google Play and enjoy it all!