Here is what we learned about AutoChess MOBA so far

Read this guide, and you will learn all you need about AutoChess MOBA. Below you will find some general information about the game, the list of all heroes, further updates, and more. So, there is no time to lose. Let’s get started!

WHAT IS AUTOCHESS MOBA?

Before continuing with some practical aspects of AutoChess MOBA, it would be best to discover more about the game itself. AutoChess is the most classic and straightforward MOBA game you can find on mobile devices. There are 3 lines, and the main base you need to protect. The game ends when one of the bases is defeated.

Also, during the round, heroes become stronger and stronger. For example, a hero can solo-destroy towers in the last game’s stages. Therefore, you should carefully consider what to do while leveling up your hero during the match to become as strong as possible.

Once you know more about the game, it would be best to learn about the most exciting part of this game - the heroes. It is not a big secret that the better you know all heroes in MOBA games, the higher your win rate will be.

There are 25 heroes in AutoChess MOBA. Every hero in this video game is individual and requires a unique approach. Each hero has different skills, stats, and other things you need to adapt your gameplay to. And in the list below, you can find all the available heroes in the game nowadays:

Most heroes in AutoChess MOBA might remind you of Dota 2 heroes. Therefore, this game will be easier for you to start if you are experienced in Dota 2. If not, there might be problems with discovering such a high number of unique heroes at once.

Also, you should keep in mind that developers regularly add new heroes to the game. Therefore, if you read this guide in 2023, there might be more heroes in AutoChess MOBA.

In AutoChess MOBA, every hero has a unique role and skill. Among the available roles are Warrior, Mage, Assassin, Marksman, Support, and Tank. You should create a strategy for a specific hero considering his or her in-game role.

According to the game role, every hero gets special skills he or she should use during the match. For example, Tanks have skills increasing their survivability, while Marksmen and Assasins will deal significant damage.

There are two universal classes with balanced skills - Support and Warrior. Heroes of these classes have attacking and defensive skills in their setup. Also, they are pretty balanced in their stats. However, such heroes appear to be the most challenging to play in the game.

One more critical aspect of AutoChess MOBA is the map. There is only one map available in the game. Therefore, perfect knowledge of the map will significantly increase your chances of winning.

The AutoChess MOBA map is based on Dota 2. So, there will be no bushes to hide behind like in other MOBA mobile games. However, there will be 6 creep camps in the jungle where you can farm experience and gold.

One more important thing to know about the AutoChess MOBA map is the two altars on each side. By capturing one of these altars, every team member will get 100 gold, which is a pretty good reward in the early game stages. Also, you can find special orbs near every altar. These orbs are one of the most overpowered things in the entire game. They will significantly improve your hero’s speed, damage, health points, and gold earning for your hero. 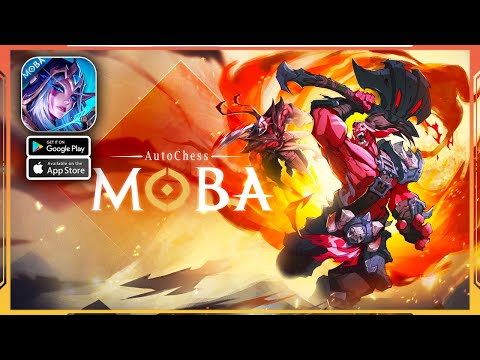 Fortunately, there is still a lot of stuff that can be added to this game. New heroes, battle pass, skins, seasonal updates, and other content are waiting for us in the future. And the best thing about it is that the developers are ready to work and listen to the community.

In conclusion, AutoChess MOBA is one of the best alternatives to Dota 2 on mobile devices. Even though this game is highly straightforward, such simplicity is the key to success, especially when we talk about MOBA games. While you're waiting for Autochess MOBA, you can take a look at the best MOBA games for iPhone and iPad or the best MOBA games for Android phones and tablets.