Looking for more details on Asphalt Nitro 2? We got you covered

Gameloft has given a big surprise to mobile gamers. They have announced Asphalt Nitro 2, which is currently available in beta exclusively for Android users. If you want to know more about Asphalt Nitro 2, buckle up your seats as we take a deep dive into all the info.

Asphalt Nitro 2 is basically Asphalt but for low-end devices. The developers have stated the game features top-notch graphics, 20 licensed supercars (including brands like Bugatti, Ferrari and Lamborghini.), four arcade game modes, and 230 races. The tracks are set in gorgeous locations in Japan and New Zealand.

You can find out more details about Asphalt Nitro 2 on Gameloft's official website.

Asphalt Nitro 2 also comes loaded with the Asphalt 9's revolutionary TouchDrive technology, the driving scheme that streamlines steering. However, it's a bit controversial because it allows players to play with just one hand on the screen and makes the player feel a little disconnected from the game. However, if players want, they can turn off this mode in the settings.

Asphalt Nitro 2 is an offline premium game. Firstly, the game is only available on Android at the time of writing, and secondly, it has not yet been launched on Google Play Store. Instead, Gameloft has published the game on their store, and if players want to get their hands on this game, they will need to spend around 1.5 to 2 USD on a subscription in the Gameloft store.

Note: The Gameloft store is limited to a few network operators. You can go to the Gameloft store, and if you are redirected to the Ludi Games website, you won't be able to access the game yet. There are no details regarding when Asphalt Nitro 2 will arrive on iOS or when it will launch on the Google Play Store, but that should be happening very soon.

Meanwhile, you can look at some of Asphalt Nitro 2's gameplay videos to decide if it's worth waiting for the game or not. 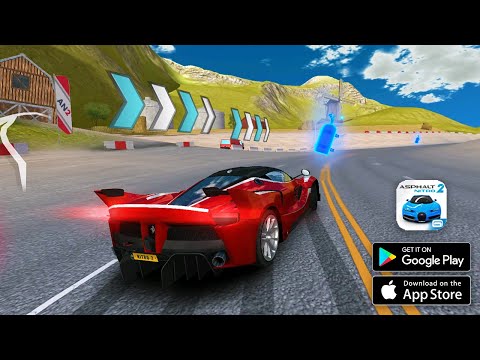 Also, if you are wondering if it's worth downloading Asphalt Nitro 2, we can say that if you are looking for a good mobile racing game with no pay to win elements and no in-app ads, it seems a pretty good option to us. But for anything else, maybe not.