This instalment picks up from the previous Elder God Wars story where players discovered the lost city of Sennisten. Fans will realise that Ariane’s premonition of war has come true. And this won’t be just a war, it is bound to be a massacre. These are the words of your enemy himself. PC and mobile players will be coming together to take on the Elder God Jas’ army of merciless Nodon Dragonkin. 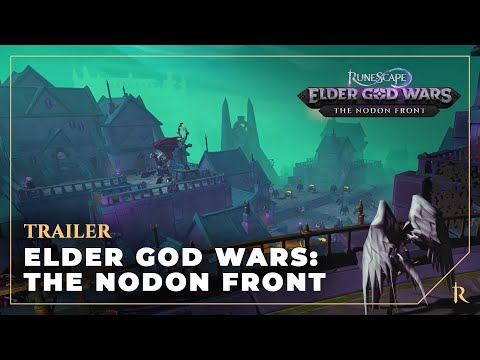 Their only goal is to burn the city down, destroy everything in it and demolish the cathedral. The Nodon Dragonkin crave the destruction of Sennisten, and with their powerful weapons of siege, it definitely looks like they can succeed in laying siege to the city and destroying the cathedral’s defenses.

And that’s where you come in. The experienced players among you with a 92 Slayer skill must rally together and destroy the Dragonkin army and lay waste to their weapons to prevent them from breaching the cathedral. Meanwhile, those of you who have a 90+ construction skill can tip the battle in your favour by using the Nodon’s own weapons against them.

Even if you are capable enough, defeating the army won’t end the problem. Your next hurdle is the army’s general, Kerapac. You all will battle it out in the Colosseum, where you’ll have to manipulate time to defeat Kerapac and his Elder God artefacts. The battle will be hard-fought and to aid you, the original God War generals, Zilyana, Nex, Kree’arra and K’ril will provide temporarily you with some abilities to beat Kerapac.

The battle will be difficult. You may falter along the way. But know that, when you beat Kerapac, you will become the owner of RuneScape’s first Tier 95 weapon, The Staff of Armandy. So, fight for this weapon and go beat Kerapac all you Hunters, Artificers, and Engineers!

Check out our top 25 role-playing games to play on your mboile!

Runefest 2018: Love, swords, games, and music in the heart of middle-England