And yet through all this, PG's recommendation for the best gaming phone has always been an iPhone.

With stacks of power, physical controls, and a huge responsive display, the Black Shark 3 Pro is bringing out the big guns in a bid to win gamer hearts and minds. Has it won ours?

The makers of gaming phones seem to have drunk from the same well as gaming PC manufacturers. That is, they assume that 'gamers' are an homogenous group who crave gaudy RGB lights and Decepticon-like design flourishes.

If you fall into that group, then you're going to love the Black Shark 3 Pro. It's got the kind of chunky shiny aluminium styling that makes it seem like it would survive an EMP attack (we were unable to test this hypothesis), and a customisable Black Shark logo RGB light on the back. The adjacent camera and magnetic charging modules (charger sold separately) are surrounded by a vaguely triangular, blue-rimmed motif. 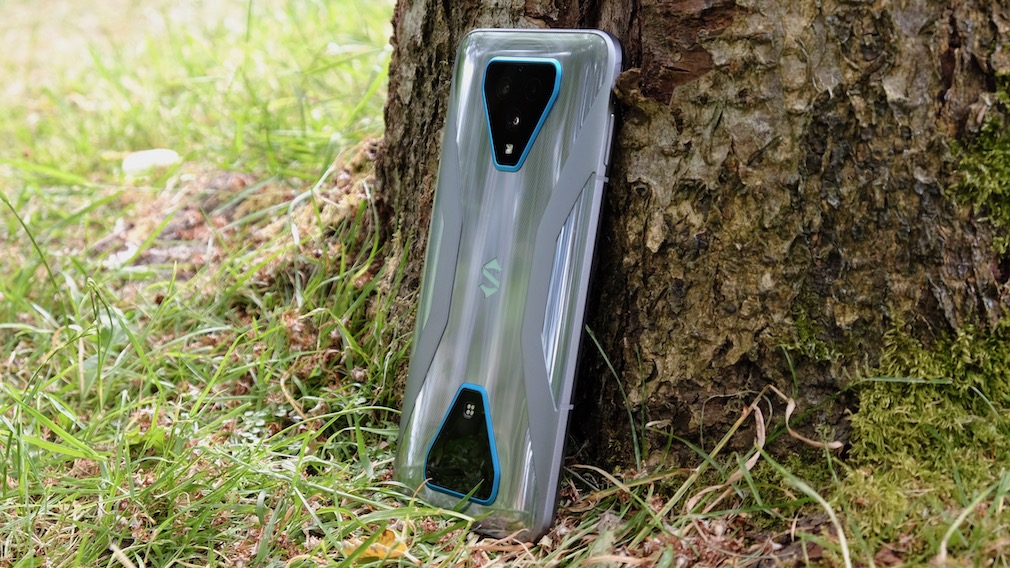 For all its in-your-face trappings, though, the Black Shark 3 Pro has been designed with symmetry and balance in mind. Which makes sense if you're going to be holding the phone in landscape for hours at a time.

We tend to prioritise a phone's gaming chops ahead of any practical considerations in our reviews. But we can't help but comment on the Black Shark 3 Pro's sheer unwieldiness as a phone. I felt a little self-conscious every time I dragged it out of my sagging pocket, while one-handed usage was a big no-no.

Weighing in at 253g, it's 54g heavier than the OnePlus 8 Pro and 27g heavier than the iPhone 11 Pro Max. That said, it's 147g lighter than a Nintendo Switch, so as a portable gaming system it's not that hefty.

The Black Shark 3 Pro's display is very good indeed. Its 7.1-inches are a little much for day to day portrait phone use, but brilliant for landscape gaming.

It's also very sharp at 1440 x 3120 (aka QHD). I liked that it was flat, with none of the distractingly distorted edges that are so fashionable with the high-end Android crowd. The choice of OLED is welcome (and arguably essential at £800/€900), providing punchy but accurate colours and deep blacks.

You get an elevated 90Hz refresh rate, and a 270Hz touch reporting rate with 24ms touch latency. That last bit means your touch responses are super snappy, though I can't really say I've struggled with this in any other flagship phone that I've used. 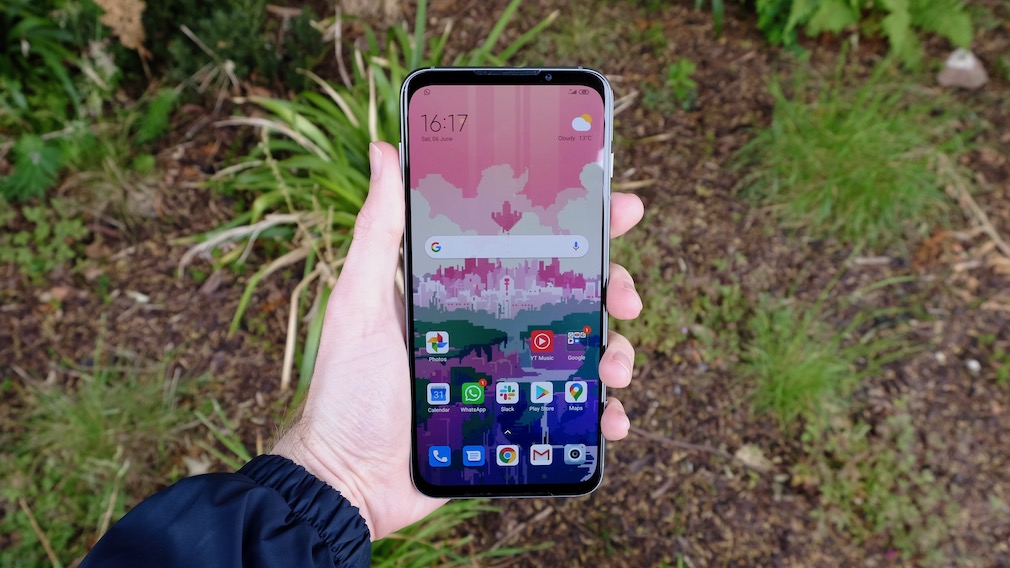 The 90Hz refresh rate is far more significant, albeit more common, and it genuinely lifts the experience in games that support frame rates higher than 60fps - of which there are an increasing number. The only trouble is, rival gaming phones like the ROG Phone 2 and the Nubia Red Magic 5G have hit 120Hz and beyond, as have non-gaming specialists like the OnePlus 8 Pro and the Samsung Galaxy S20.

Xiaomi claims that 90Hz was a deliberate decision due to most games simply not supporting frame rates of 120fps and upwards. Which is undoubtedly true, but I would still have liked to see the Black Shark 3 screen hit 120Hz.

I've got nothing but praise for the Black Shark 3 Pro's audio offering. You get a hefty pair of front-facing stereo speakers and a 3.5mm headphone jack - a gamer-friendly combination you won't find in too many phones these days.

Gaming performance is unimpeachable on the Black Shark 3 Pro. It's got the best non-Apple processor in the Snapdragon 865, alongside 8 to 12GB of blazing fast LPDDR5 RAM and speedy UFS 3.0 storage. So does the OnePlus 8 Pro, of course, but Xiaomi couldn't really spec things any higher.

What it has done is maximise what's available through a meaty liquid cooling system that dissipates way more heat than usual. Heat is the enemy for any gaming device, as it causes the CPU to throttle back. The Black Shark 3 Pro might not be any faster than other Android phones in a straight sprint, but it can maintain that performance for longer.

I did notice the phone staying cooler under load, with no uncomfortable heat build-up after protracted rounds of PUBG Mobile or CoD Mobile. With the optional FunCooler Pro peripheral you can even increase the phone's cooling performance, but it's a little clumsy to use and requires you to stay tethered to a power point.

I couldn't really make the Black Shark 3 Pro sweat in terms of performance either. I cranked the graphics up to max on PUBG Mobile and CoD Mobile, and everything flew along. GRID Autosport felt every inch the slick console racer that it is. 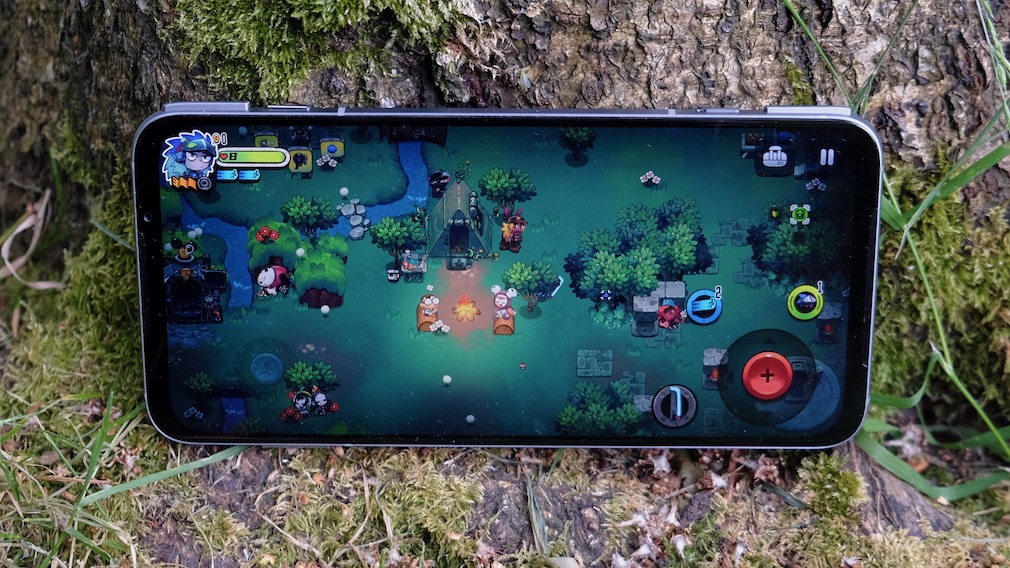 Indeed, pretty much every complex, console-like game I tried played better on the Black Shark 3 Pro than on any other phone, and that's got little to do with performance. It's the phone's unique pop-out physical buttons that really give it the edge.

Once activated from the gaming app overlay (swipe in from the top right corner), a pair of mechanical shoulder buttons magically pop out of the chassis. You can then use the aforementioned overlay to assign them to a virtual button of your choice.

In PUBG and CoD Mobile, I assigned the right trigger to shoot and the left trigger to aim-down-sights. The effect was an immediately more engaging experience, and an improvement to my performance over pure touchscreen phones.

On detailed twin-stick shooter Juicy Realm, the right trigger handled shooting, and the left dashing. I don't know that my runs improved, necessarily, but the game felt more tactile and fun as a result. On GRID, I placed acceleration on the right trigger and braking on the left for an almost-complete console-aping experience.

It's genuinely impressive what these two little buttons can achieve, and they're the main reason(s) committed mobile gamers who don't like to carry a Bluetooth controller around with them should consider the Black Shark 3 Pro.

The camera in the Black Shark 3 Pro is identical to that of the Black Shark 3, a phone that costs £150 less. That tells you a lot about its quality - decent, but certainly nowhere near the top tier.

It's a triple camera with a 64MP main, a 13MP ultrawide, and a 5MP depth sensor. These all combine to take decent shots in good lighting, though it tends to overexpose bright skies and oversaturate reds and oranges. The OnePlus 8 Pro camera roundly trounces it, especially on low light and night time performance.

Shark Space 3.0 is the name given to the Black Shark 3 Pro's custom gaming mode, which can be activated via a physical slider switch on the right edge. Do this, and the phone enters a dedicated UI from which you can launch games, manage any Shark Kit peripherals you've bought, and manage how the phone reacts whilst gaming. 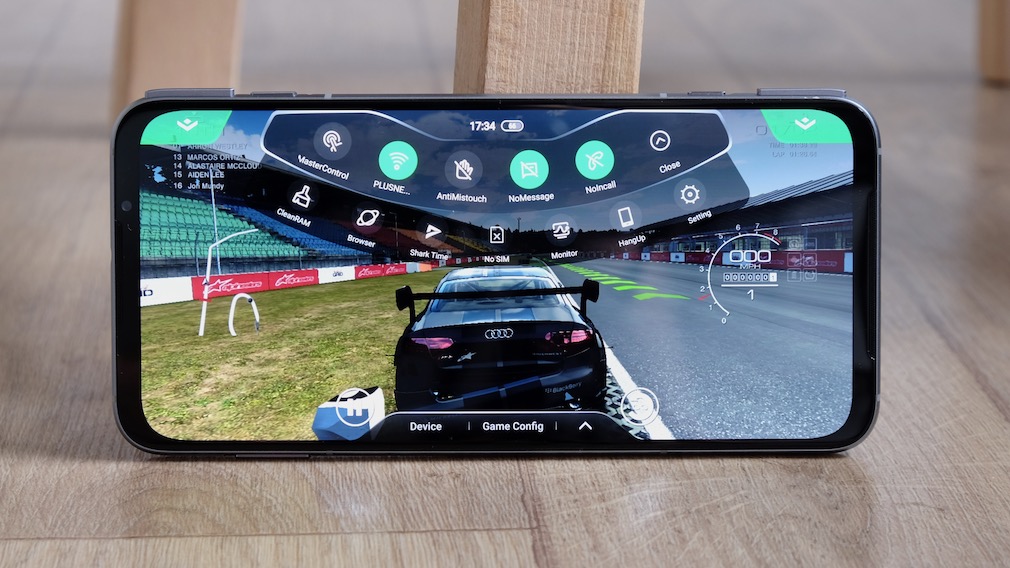 5G connectivity is notable for its inclusion, but the lack of NFC is somewhat mystifying. Whether you're pairing a wireless peripheral or making contactless payments - as more and more people are in these tricky times - this seems like a fundamental feature. As does wireless charging when you're spending this much money, but it's nowhere to be found.

Oh, and the custom JoyUI 11 skin is far from the best custom Android UI. It's far too fussy and nannying, its design language is too prosaic, and there's too much bloatware. And where's the Google Feed gone?

On the battery front, you won't be getting any staggering performance out of the Black Shark 3 Pro, despite its whopping great 5000mAh battery and monstrous cooling system. It's good for well north of a day of normal usage, but as soon as you hit the games hard you'll be eating into that time like any other phone.

In one 14 hour day where I a spent a couple of hours gaming, indulged in lots of web browsing and took a handful of photos, I was left with 13 percent. In terms of pure gaming performance, an hour of Juicy Realm on top settings ate around 15-20 percent of a full charge. These aren't exactly bad figures, but nor are they outrageously good.

We still maintain that iOS is the best mobile gaming platform, while the OnePlus 8 Pro offers the best all-round Android experience for the vast majority of people - including most gamers.

But for those who are seriously invested in a certain brand of competitive or twitchy gaming, the Black Shark 3 Pro offers an unmatched experience. There is no other phone that boasts this combination of ultra-responsive 7.1-inch OLED display, top grade 2020 power, advanced liquid cooling, and dedicated hardware buttons.

For those demanding a competitive edge across a handful of multi-platform titles like CoD Mobile, PUBG Mobile, Fortnite, and Vainglory, the Black Shark 3 Pro is the ultimate choice right now.

A decidedly niche gaming device that will be too unwieldy and gaudy for most, but which represents the pinnacle of competitive mobile gaming hardware for the seriously invested. It's not pretty or even feature-complete, but the Black Shark 3 Pro's huge responsive screen, top notch performance, and hardware buttons make it the best out and out gaming phone on the market.
By Jon Mundy
| Jun 22, 2020 |