It's been less than three years since I lauded the OnePlus brand as an antidote to the extravagant £1,000 flagship phones that were then starting to appear.

What gives is that OnePlus is no longer the cheeky little new kid looking to kick Samsung and Apple in the backside and run away. It's now one of the popular kids - albeit one still short of the top tier.

But more importantly than that, the OnePlus 8 Pro is the best Android gaming phone on the market right now. Here's why.

Huge, front-filling curvy-edged screen with a hole-punch camera notch? Check! Glass front and back with a metal frame? Check! Big sticky-outy camera module that makes the phone rock like an old fashioned cot when laid on a table? Checkity check. 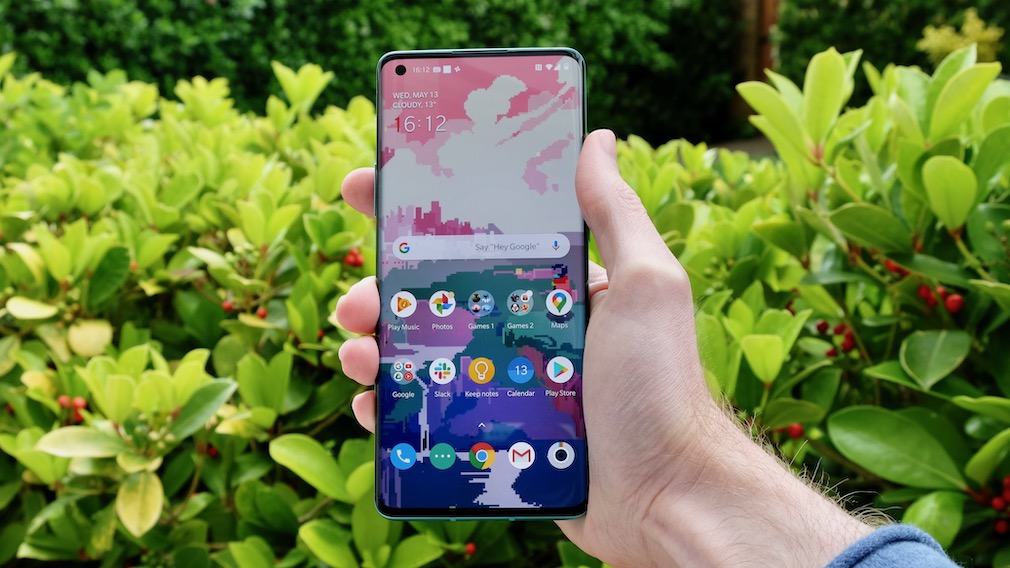 This is a big phone, too, and is really quite tricky to wield at first. It's a frankly alarming 7mm taller than the mammoth iPhone 11 Pro Max, which is something to keep in mind for those surreptitious one-handed gaming sessions. At just shy of 200g, though, so it's not prohibitively heavy.

It might not be the easiest phone to lug around, but of course the OnePlus 8 Pro's size has positive repercussions for gamers: chiefly a bigger screen and more capacious battery.

Ah, the OnePlus 8 Pro display. 'Tis a thing of beauty. A whopping 6.78-inches in size and with a stretched-out 19.5:9 aspect ratio, it provides a serious canvass for landscape gaming.

This is a big bold AMOLED display of the highest order, with the kind of brightness and punchy-yet-accurate colours you typically see in Samsung's and Apple's best efforts. It can go up to 1440p (aka QHD or 2K) too, which is way sharper than any iPhone and on a par with the Samsung Galaxy S20.

The OnePlus 8 Pro screen also boasts a 120Hz refresh rate, meaning that content can move and scroll twice as smoothly as on phones like the the iPhone 11 Pro. This isn't a unique feature - the aforementioned Galaxy S20 can also hit 120Hz. But it can't output at 1440p at the same time. The OnePlus 8 Pro can do both. 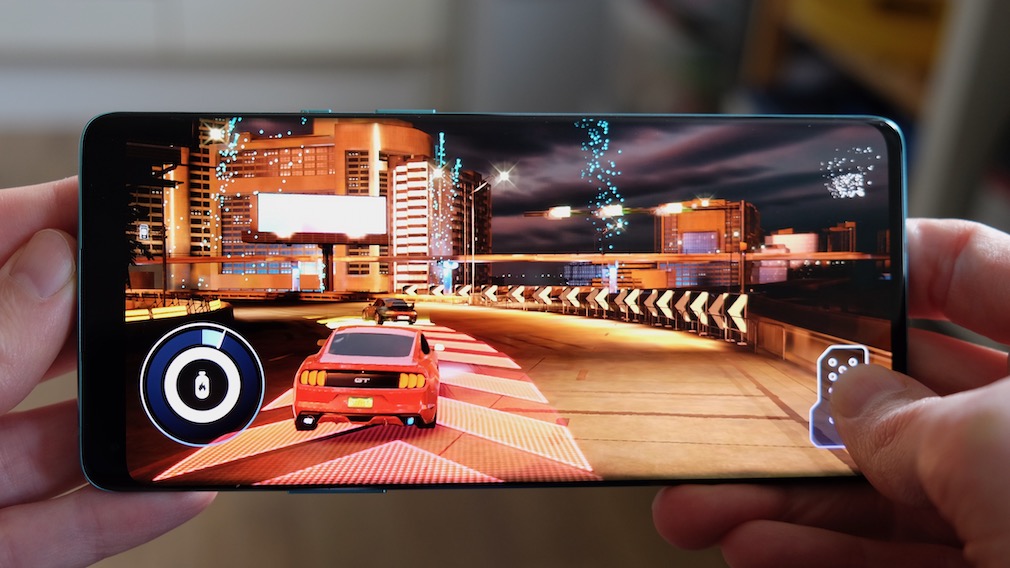 Now, doing this will hit your battery life hard, especially when gaming. And not all games are set up to capitalise on such elevated refresh rates. But you'll really feel the benefit with the ones that do.

Put simply, this is an impeccable screen for gaming. And the positioning of the hole punch notch naturally falls under your left thumb, meaning it doesn't tend to get in the way of the action. Some games will cut it off anyway to square things up.

This brilliant visual experience is accompanied by decent, if not mind-blowing sound. It isn't the deepest, punchiest audio provision on a phone, but it is stereo (in landscape) and certainly rings out clear and loud.

Such a big, vibrant, and responsive display needs some serious processing power to drive gaming content. And the OnePlus 8 Pro duly provides.

The Snapdragon 865 CPU that powers this phone is the most powerful chip in Androiddom right now. And that's backed by either 8 or 12GB of super-fast LPDDR5 (most phones run the slower LPDDR4).

It's ludicrously well equipped for today's games, and I haven't been able to make it so much as pause during my month or so with the phone. And that includes games that have been optimised to utilise that 120Hz display. 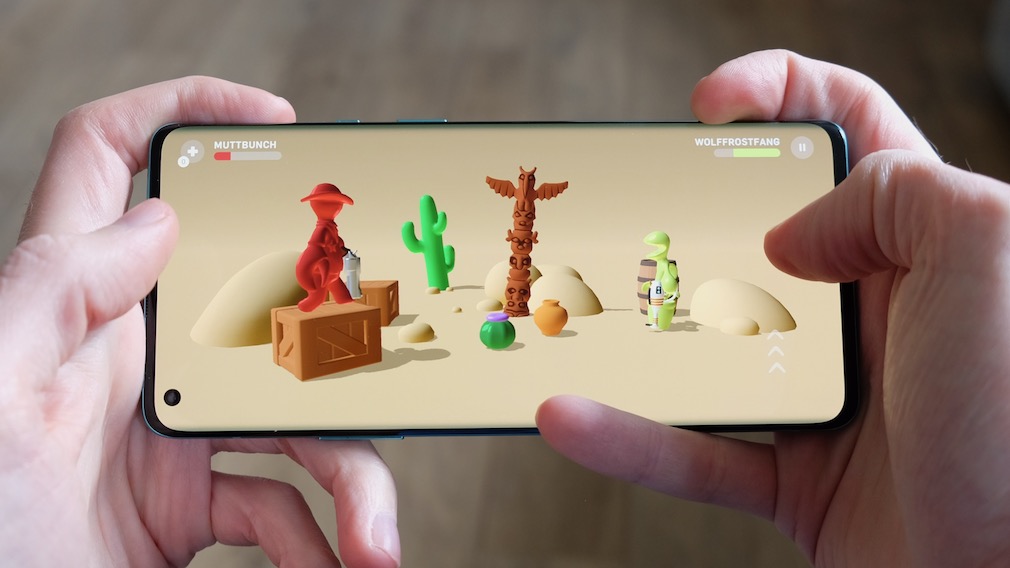 I still maintain that the latest iPhones are the best mobile gaming devices by virtue of the fact that the App Store is a better gaming shopfront than the Google Play Store. But there's a case to be made that individual games like Grimvalor and Alto's Odyssey look and play better on the OnePlus 8 Pro than on any Apple phone.

There's even a specialist gaming mode here, called Fnatic Mode, which will do things like block all notifications and give over more of the OnePlus 8 Pro's considerable resources to gaming. It lives within OnePlus's more general Game Space function, which lets you tweak how the phone behaves whenever you start up a game.

In truth Fnatic Mode is probably overkill, given how capable this phone is anyway, but it shows that OnePlus has kept gamers in mind while designing its phone. As a result, while the OnePlus 8 Pro isn't a dedicated gaming phone like the Black Shark 2, it's a phone serious gamers should at least consider.

OnePlus phones have never been particularly hot on the camera front, but the OnePlus 8 Pro bucks that trend. It takes really good photos in a variety of situations.

With four cameras, led by a sharp 48MP f/1.8 sensor, the Pro can take really sharp, balanced pictures in good lighting. You also get a strong night mode that can take decent shots in very dark situations. It doesn't beat the iPhone 11 Pro or the Huawei P40 Pro, but it's now competing in the same league.

Battery life is reasonably good in the OnePlus 8 Pro, and it'll generally get you through a day with ease. Play a bunch of games with both QHD+ resolution and 120Hz switched on, however, and you might find yourself looking for a wall socket before the day is done. You can always opt for a combination of 1080p and 120Hz or QHD and 60Hz, though, depending on how intensive the game you're playing is. 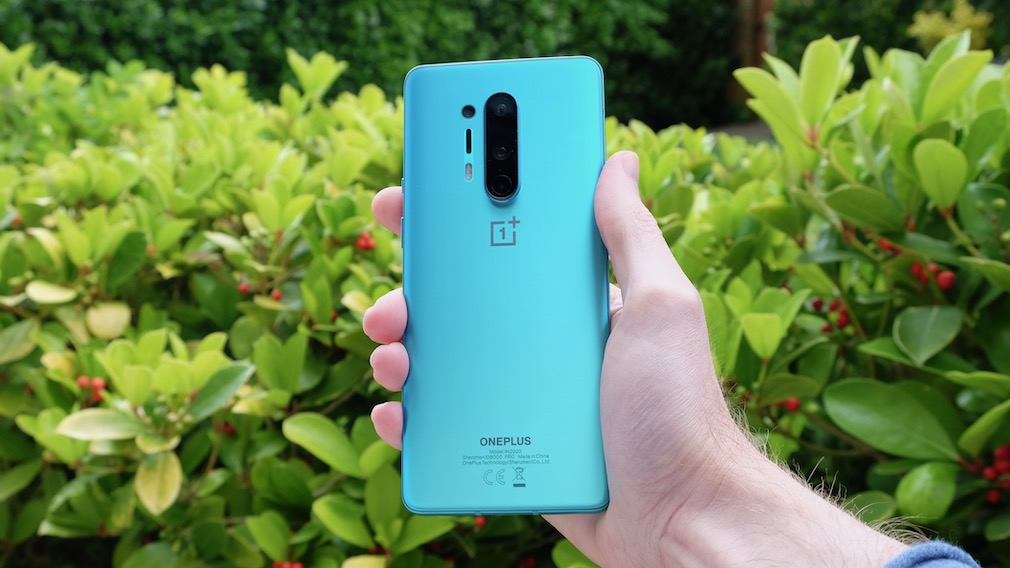 When you do run low on power the phone comes bundled with a speedy 30W USB-C charger that will gain you 60% of a charge in 30 minutes, if you're very low. There's also fast wireless charging, though you'll need to buy a custom charger for the full speedy effect.

One of the most appealing things about using a OnePlus phone is its custom OxygenOS UI. It's a fast, fluid, finely crafted take on Android 10 that's far less fiddly and full of bloat than equivalent efforts from Samsung and Huawei.

Oh, and there's 5G connectivity as standard, for what it's worth. That'll probably only mean something to you right now if you're living or working in the middle of a big city. But it'll become a lot more relevant if you're planning to use your OnePlus 8 Pro for two years or more.

The OnePlus 8 Pro might be the most expensive phone OnePlus has ever made, but it's also the best. In fact, we reckon it's the best pound-for-pound phone out there for Android-favouring gamers.

This is largely thanks to the phone's large, sharp, 120Hz AMOLED display, which is uniquely well equipped for gaming. Elsewhere, exemplary performance will drive the most intensive 3D games for years to come.

Throw in the fact that it's a really nice, solid phone to use every day with - hallelujah - a great camera, and you have yourself a surefire winner.

The OnePlus 8 Pro might not be the outright bargain we've come to expect from the brand, but for your £900 you get the best all-round phone for Android gamers on the market, with a phenomenal 120Hz screen and top-drawer performance.
Next Up :
Otaku's Adventure mobile review - "A truly bizarre love triangle"