Licensed games have, in the past, been given a bad rap. Console players in particular will be familiar with the endless iffy adaptations of beloved franchises. They're often criticised for feeling rushed or passionless, lacking the care and respect the IP often deserves. Now, mobile is home to countless licensed games, many of which have the exact same criticisms levelled at them.

An attempt at some sort of authenticity is one way to go about adapting another work. But what has to be considered when trying to honour and emulate a specific source? A great deal, as it turns out, from the art to the writing and beyond.

From the team at No Yetis Allowed, a company co-founded by industry veteran Mark Hardisty, Judge Dredd: Crime Files is a strategy RPG developed in collaboration with some of the driving forces behind the Judge Dredd comics.

"I've personally been a Dredd fan for a very long time, reading my older brother's copies from Prog 1 back in 1977. So I was continually trying not to 'fanboy out' when speaking with the various Dredd creatives, some of whose work I'd been reading for over 40 years", says Hardisty. 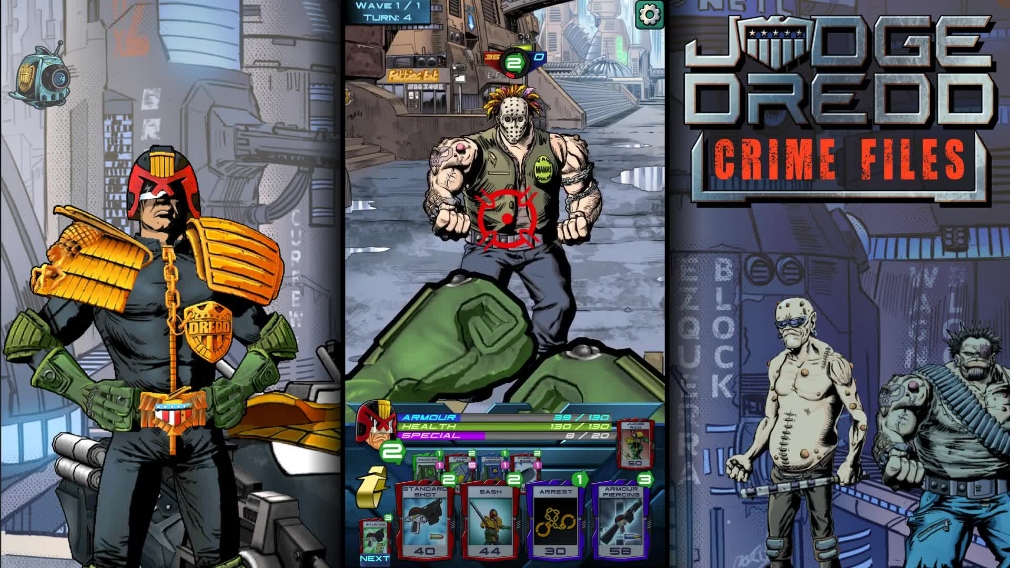 This isn't the first licensed title from the team, with their previous games including Peter Rabbit: Let's Go! and Pocket Shrek, but I get the sense that working within the Dredd universe comes as an especially large treat for Hardisty.

After acquiring the rights to make the game from Rebellion, he approached Tharg the Mighty, the editor of 2000 AD, about getting various Dredd artists and writers working on the game, and Tharg was more than happy to help.

Neil Googe was the first artist to join, ultimately helping the team to define the game's sense of style and character designs. With the basic look now in place, Boo Cook, a prolific 2000 AD and Dredd artist, came on board to create the game's many robots.

Steven Austin, an up-and-coming Dredd artist currently working on his first Dredd strip for 2000 AD, helped to create designs including the gross Mutants, Futsies, and Juves. The team then found Lyndon Webb through his Facebook page, where he posted impressive takes on Dredd and 2000 AD characters. Webb went on to design the game's robotic judges, also known as Mechanismo Units.

Colin MacNeil, who was the original creator of the Mechanismo Units, also helped by sending along sketches of the updated Mechanismo Droids that you might remember seeing a while back in the weekly 2000 AD.

"Colin is a prolific Dredd artist, having drawn many of the classic Dredd storylines, such as America or Song of the Surfer, and is probably my favourite Dredd artist, so it was great getting him involved, even in a little way".

Hardisty had previous experience working with ex-games concept artist Stephen 'Baz' Baskerville, who had inked some early Dredd strips and produced technical drawings for Dredd annuals, including one of Dredd's iconic Lawmaster Bike. Baz worked on several of the game's standout designs, such as the enemy Fatties.

To nail the look of Mega-City One is no small task. And so Pye Parr and Dan Cornwell (also credited for drawing Judge Anderson, Judge Rico, Judge Giant, and the Mechanismo Unit Judge Clive) were approached to work on the backgrounds. Long-time Dredd colourists, Len O'Grady and Chris Blythe, would then make the city's environments, backgrounds, and grisly inhabitants pop.

Achieving a specific look is one thing, but the writing also has to ring true. Michael Carroll, who has handled major Dredd storylines in the aftermath of the Day of Chaos event, wrote the game's Upgraded storyline, which gives Dredd a large-scale cyborg infestation to tackle. 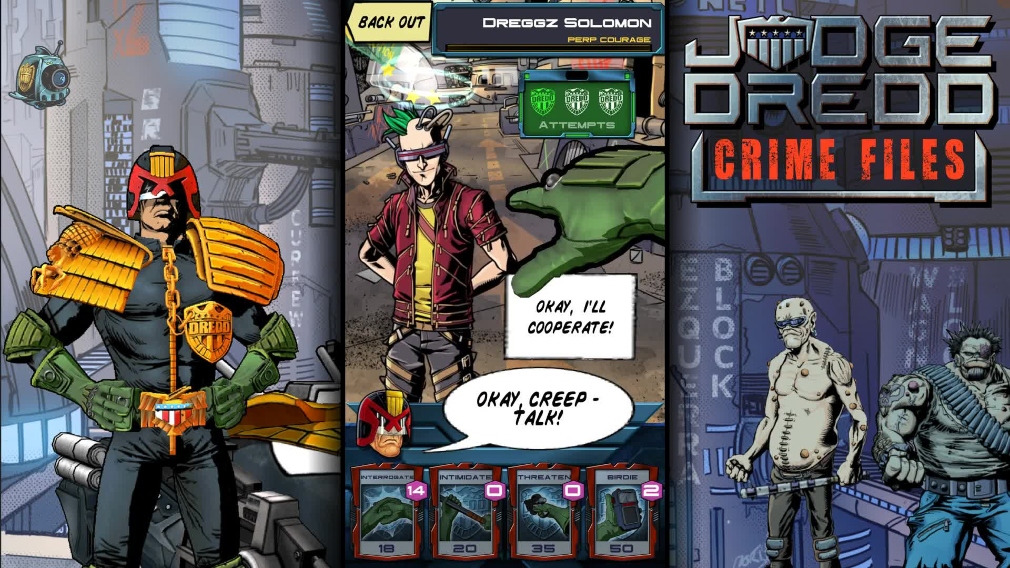 "With the writers, we were very specific in letting them come up with the storylines themselves. We didn't want it to be 'fan-fiction', as in, us coming up with our own ideas. With all writers, we said to them "come up with stories you think would work". And that's what they did".

Long-time Dredd fans will notice nods to several classic moments, including a tip of the hat to the Punks Rule storyline from Prop 110 in the introductory campaign. Here, Dredd takes on the Slab Doggz, a violent street gang televising their vicious crimes, all alone.

More stories are planned to be added over time, which doesn't come as too much of a surprise given just how vast the world of Dredd is. "The Cursed Earth is likely to be an area we are going to be exploring soon, as well as meeting some of Dredd's cast of enemies".

Beyond pulling from decades of Dredd, Crime Files also takes design cues from modern mobile games, including Clash Royale and Battlehand, especially the former's UI structure and the latter's balancing and gameplay flow.

Another interesting creative move was to have the card-based action viewed from a first-person perspective, a decision that better cements you, the player, as Dredd. The upcoming clan-like Sector Houses also play into Dredd's universe, requiring you to team up with other judges and keep your specific sector as crime-free as possible.

Outside of the comics, it would arguably be quite hard to ignore the potential influence of film adaptations Judge Dredd (1995) and Dredd (2012).

"I remember going into the 1995 Stallone Dredd at the cinema and just loving the first 15 minutes. The look of Mega-City One in that film is so spot on, but the character of Dredd is just too much Stallone, so it becomes less of a Dredd movie and more of a Stallone movie, set in a stunning Mega-City One".

That said, "Karl Urban nailed Dredd and gave a portrayal of the character that I didn't think was possible in today's movie landscape. I also loved the fact that it was just another day on the job for Dredd".

The importance of these ideas, contributions, and decisions could well fall under the radar of a player blasting through Crime Files during their morning commute, but for Dredd fans or those interested in what it takes to create an 'authentic' adaptation, there's a lot here to get stuck into and appreciate.

Judge Dredd: Crime Files is available for download now from both the App Store and Google Play.

On the hunt for more quality RPGs? Here are 25 of the best for iPhone and iPad
SEE COMMENTS