Brawl Stars is a fast-paced mini-MOBA that pits two teams of brawlers against one another in a variety of rotating game modes.

While there are only sixteen brawlers currently available to choose from, selecting the right one for the mode and map you're playing can help tip the balance and outcome of a match.

Of course, in the right hands and/or with the right team, any character can be used on nearly any map with success. A lot of choices still come down to personal preference and comfort. Our recommendations below are based on solo-queueing and what we've had consistent wins with or gone up against and noticed other players using successfully.

This guide will specifically look at Bounty and the seven maps in its current rotation. Bounty is the closest thing Brawl Stars has to a standard deathmatch: the goal is to kill the enemy team as much as possible within the three-minute timer.

Getting a kill awards you a star, and killing a brawler gives your team the total number of stars that opponent had accrued. So, if you kill two players, you'll have three stars above your head (everyone starts with one star). If the enemy team then kills you, they will earn three points and your star count will reset to one.

We've primarily recommended Common and Rare brawlers in this list, with a few mentions of Epics and no suggestions for Legendaries. We assume most players that might be interested in map-specific suggestions probably haven't unlocked all of the less common characters yet. And honestly, through the joy of RNG, we haven't either.

Brawl Stars is in beta so the characters, game modes, maps, etc. are being adjusted regularly. However, brawlers' general gameplay style—sniper, tank, and so on—typically doesn't change even if they are nerfed or buffed, so our map suggestions are based on the overall style of the brawler as opposed to their current exact set of stats. For example, Mortis is still the strongest choice for Smash & Grab despite having his health nerfed recently.

The images below offer the overview of each map you receive when you first enter a match. If you'd like to see larger, scrollable versions of the maps, we highly recommend checking out Mobile Gamer Hub's excellent resources. 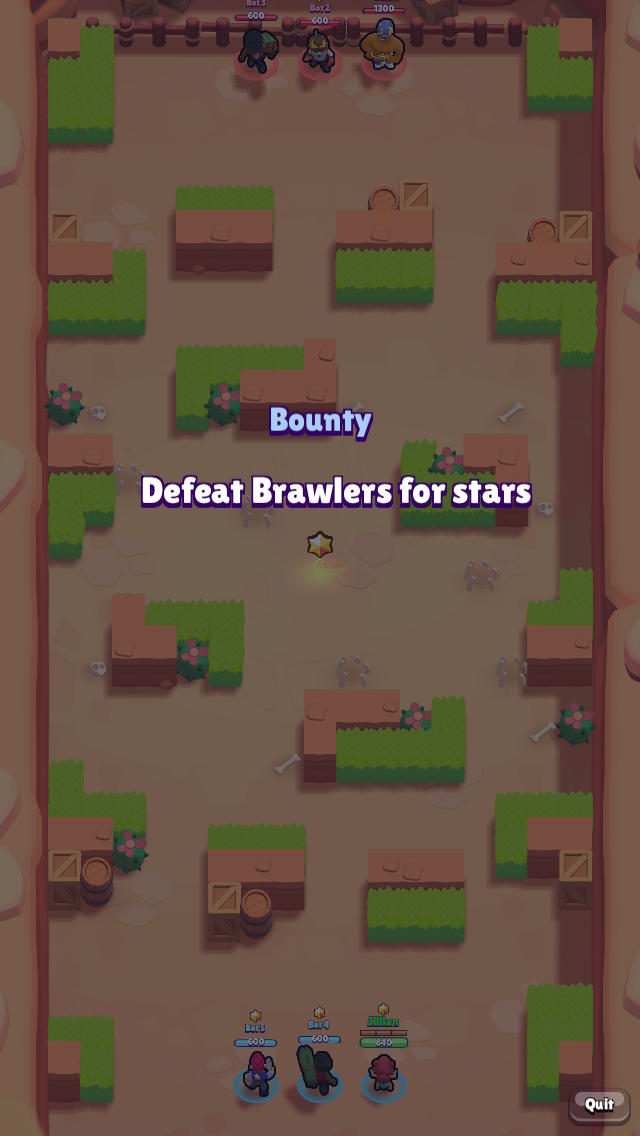 Cabbage Patch usually ends up playing as two different maps over the course of a match. To begin with, it's filled with tiny walls that offer great protection and mobility for characters like Shelly, Nita, Bull, and Mortis.

Although you'll encounter a lot of long-ranged brawlers here, it's fairly easy to cross the map and reach them thanks to these walls. Even Dynamike can get close to the enemy spawn and lace them with TNT without putting himself in too much danger.

As the match progresses, however, these walls will almost certainly be destroyed by brawlers' Supers, leaving most of the map wide open. This is when Brock, Colt, Piper, and to a lesser extent, Ricochet—who benefits from the walls before they're removed—shine. Since the end of a Bounty match is usually more important than the beginning, we have to give the lead to long-ranged characters here. 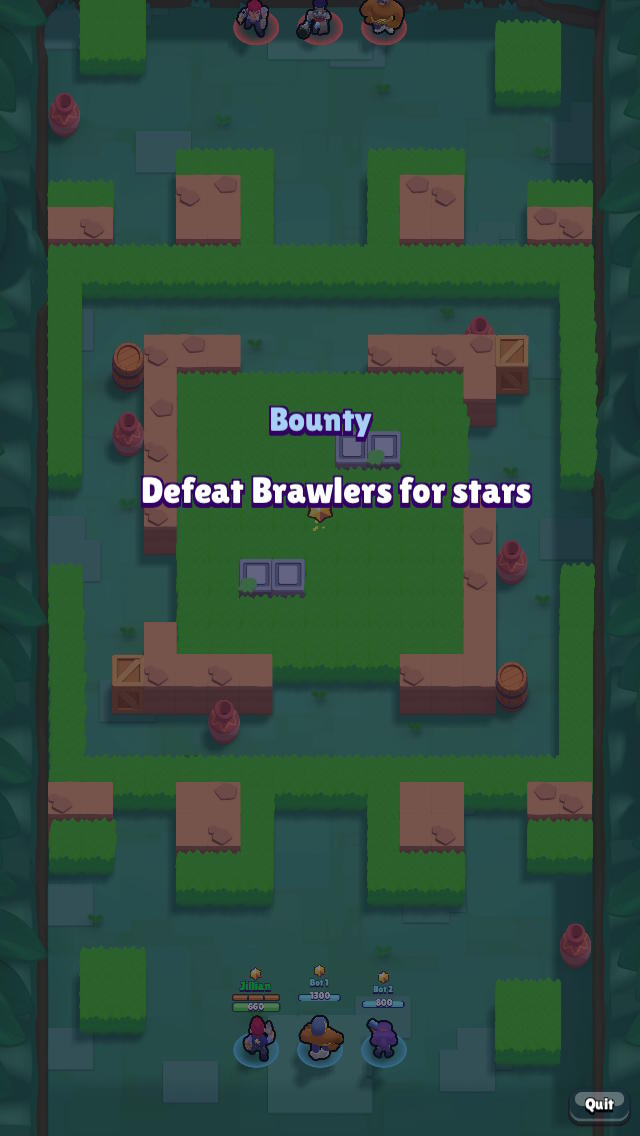 Outlaw Camp is one of the most well-rounded Bounty maps in terms of brawler friendliness. There aren't many brawlers that can't do well here, although classic close-range powerhouses Shelly and El Primo thrive thanks to plenty of grass to hide within all across the map.

Nita's bear or Ricochet can flush out a team hiding in the large, grassy center. Poco can help hold within the center with his wide arc attack that travels through enemies. Barley can flush out a hidden team or at least reduce their potential areas of attack. 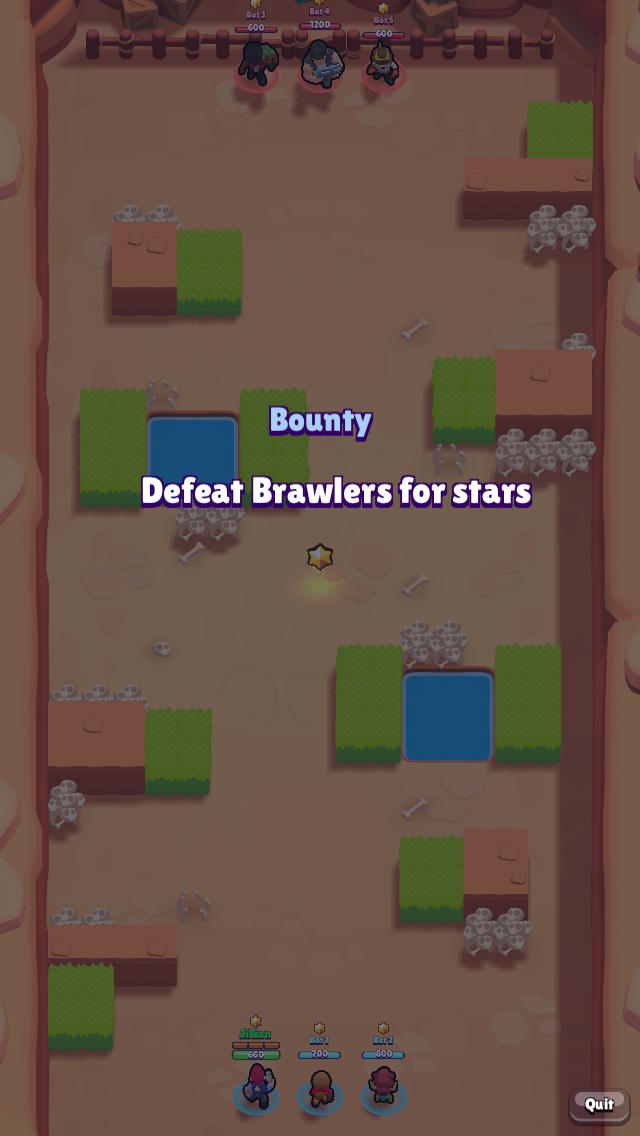 This map is sniper heaven. The longest ranged characters are ideal here: Brock, Ricochet, and Piper thrive by staying at max range. Melee brawlers will have a tough time reaching them due to the extreme lack of cover and small ponds that are essentially sniper shields.

If you don't have a sniper available, Dynamike can help open up a path in a pinch, while Shelly or El Primo can make it across the open field with very careful dodging and keeping to the eastern edge. 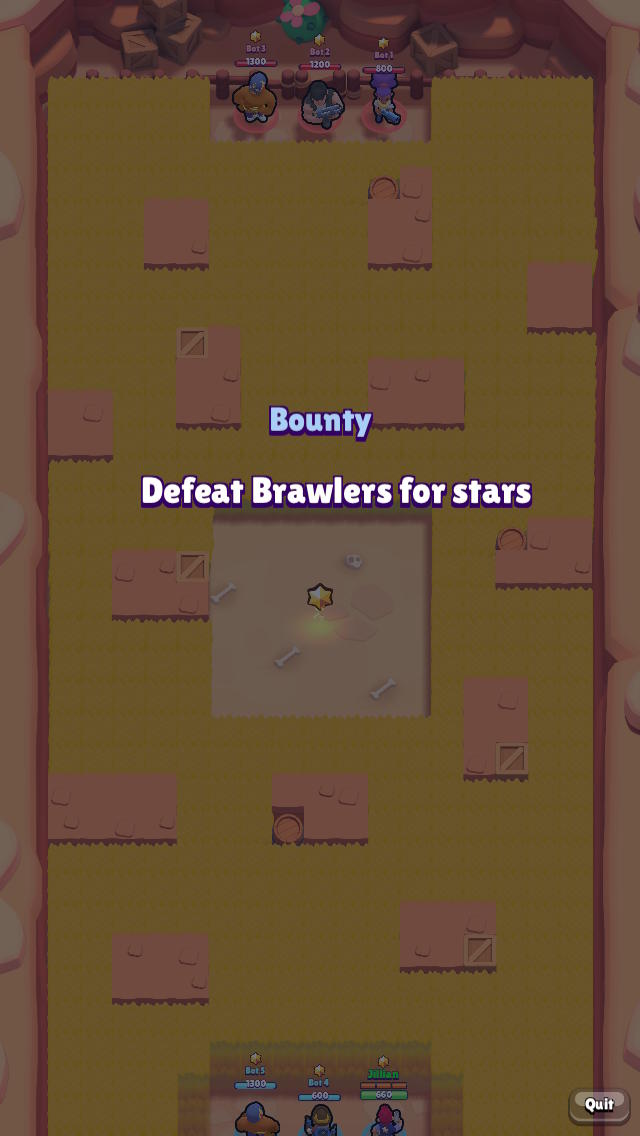 This map has Nita's name written all over it. Her bear is hidden within grass when not attacking, just like brawlers. Because of this and the bear's method of homing in on the nearest combatant, it can sneak across the map or route out enemies hiding on your side.

Stealthy or burly brawlers like El Primo, Bull, or Mortis should be able to sneak up on enemies thanks to the connected lanes of grass on both flanks, although opposing bears or Jessie's turret can give their position away. Since you'll often encounter teams in tight groups attempting to flank, both Poco and Bo can provide some much-needed area control with their main and Super, respectively. 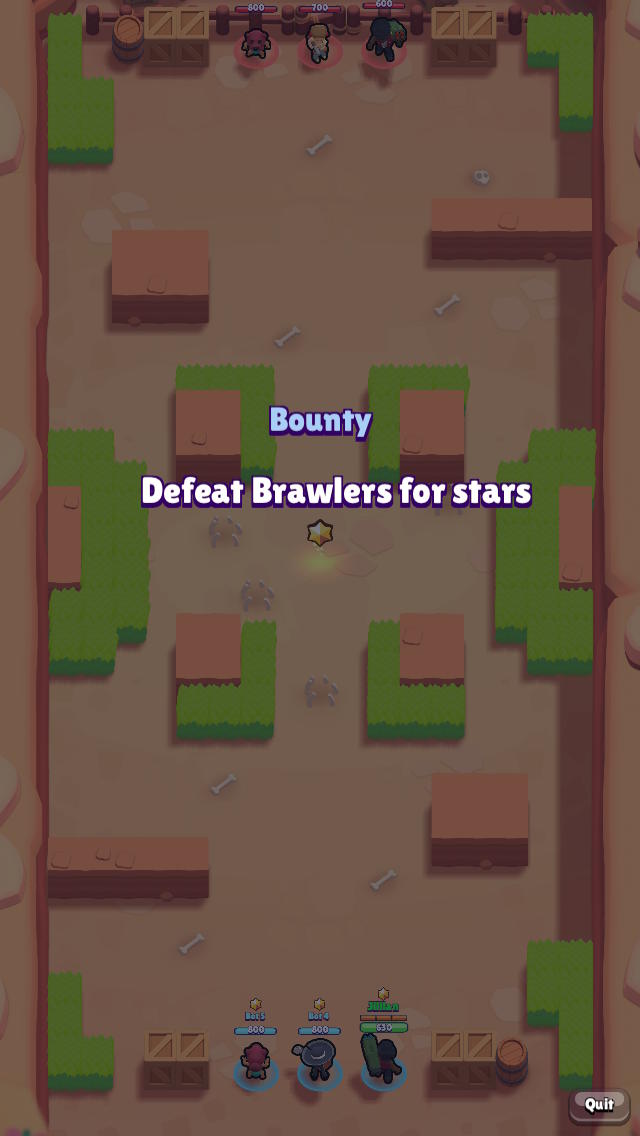 Long ranged characters like Colt and Piper thrive here. Ricochet is a great choice because the walls are set up with really easy bounce potential.

This is one of the few Bounty maps that we really love using Dynamike on: all the small walls provide cover that he can dance around – if a ranged character tries to circle towards him, it's easy to slip to the other side of a wall while tossing at them.

Brock also consistently does well on this map, thanks to the fairly long lines of sight and obvious hiding spots that he can blast with his Super. 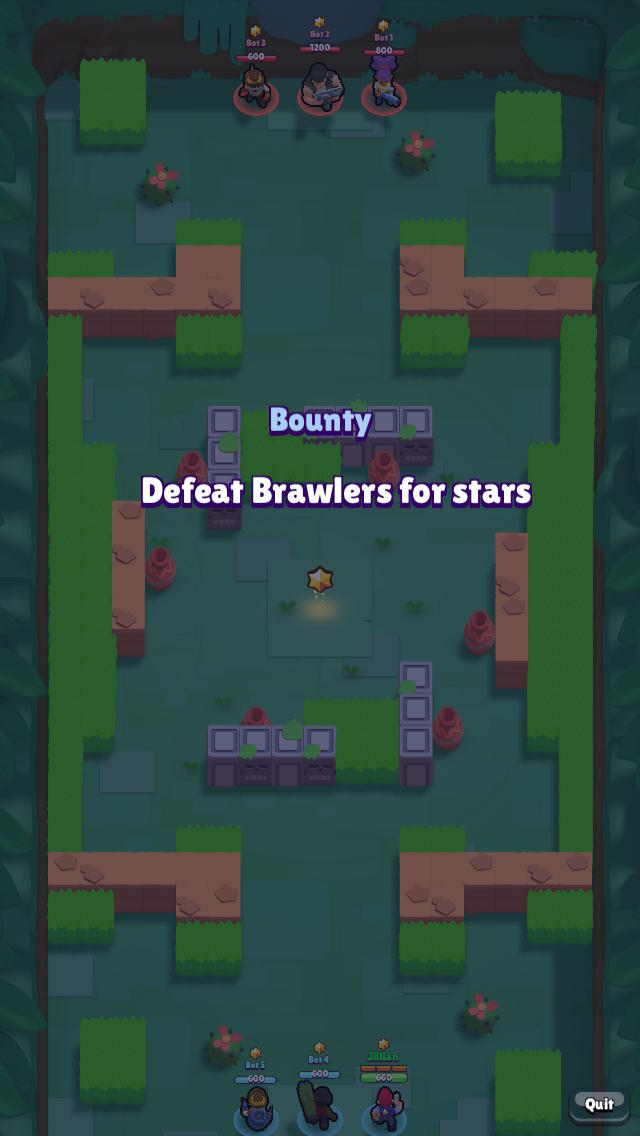 Temple Ruins is the only Bounty map in which the spawns are restricted to a single lane of entry or exit. Recently, we've run into some teams using a fairly frustrating but effective approach of sending Mortis out to grab the center star, then rushing back to the spawn and essentially treating him like a Heist safe the rest of the match.

With only a single lane of entry, actually getting to an enemy playing this way is tough. If you run into this tactic, we recommend using Barley or Dynamike for Temple Ruins so you at least have a way to attack the enemy behind their walls. A well placed Ricochet volley can also work, but he has to line up his shot just right.

On a normal friendly match where everyone leaves their spawn, we love Colt or Brock on this map thank to its long, straight lines of sight. Shelly and El Primo also thrive in the connected rivers of grass that allow for surprise attacks. 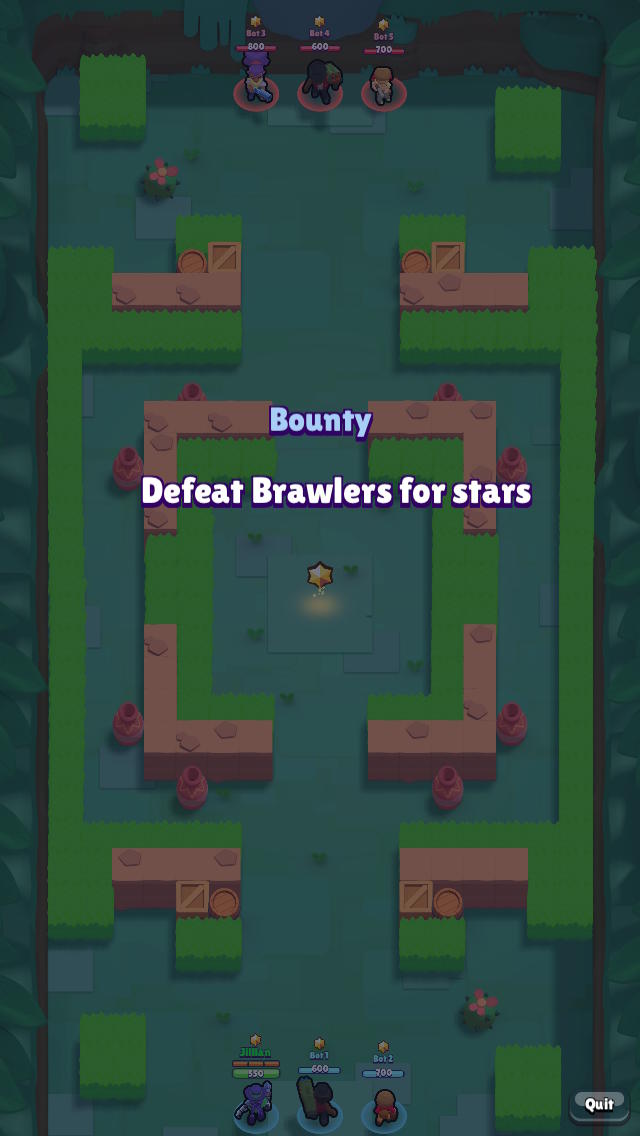 This is another fairly balanced Bounty map where a lot of brawlers can shine. Shelly, Bull, and Mortis love the long, connected lines of grass that allow for sneaking across the map. Bo and Jessie's Supers can protect against these sneak attacks or control the center.

Ricochet has a lot of advantageously positioned walls to work with. This is one of the few Bounty maps where Piper doesn't seem as dominant: it's too easy to sneak up on her and she has to fire at mostly shorter angles to protect herself.

Want more? Check out our 12 other Brawl Stars tips, guides and walkthroughs!

Brawl Stars tips and tricks - A guide for the beginner brawler