Zombie hordes have grown to such size that they've infested everything. Your mobile is no exception. With the undead so ubiquitous, it's a question of what might make one particular corpse stand out over another.

Zombicide's claim to fame is that it's a board game adaptation. Except it isn't. A key draw of the boxed version was the horde of plastic figures inside. And for the app, they've changed a bunch of rules. Dice now seem to roll as percentages, noise isn't a big deal and many character skills have changed.

This isn't a brainless decision, though. Most of these alterations serve to make the game a smoother, better experience on mobile. They take advantage of the processor doing the setup and some of the heavy lifting. Zombie hit points and character skills, for example, are a little more varied, a little deeper than they could realistically be on tabletop.

As you might imagine from a board game, Zombicide is a strategy affair. Each turn your characters use action points to move, attack or interact with something in their space. When they're done, if there are any zombies in their space, they'll get attacked. Then zombies move one square across the city grid toward the closest character and new zombies will spawn. Repeat until you either complete the mission's goals, or everyone dies.

It sounds too simple to be interesting. Yet some clever design ensures the easy setup manages to keep you engaged. The maps have been cunningly laid out with dead-ends and locked doors to create choke points and killing zones. So you need to think about where to position characters so they can best kill without getting killed.

You also have to watch ranged versus melee attacks. The latter tend to do more damage, whereas it's risky to use the former in squares with other characters. There's a risk of friendly fire, see. And you can't take too much time moving ranged and melee characters around to keep everyone safe. There's an ever-filling danger meter which makes the zombies tougher.

However tough they get, though, they rarely seem to mount a serious challenge. And that's the biggest issue with the game. A couple of awkward scenarios aside, most of it is a cakewalk so long as you put in the most minimal planning. 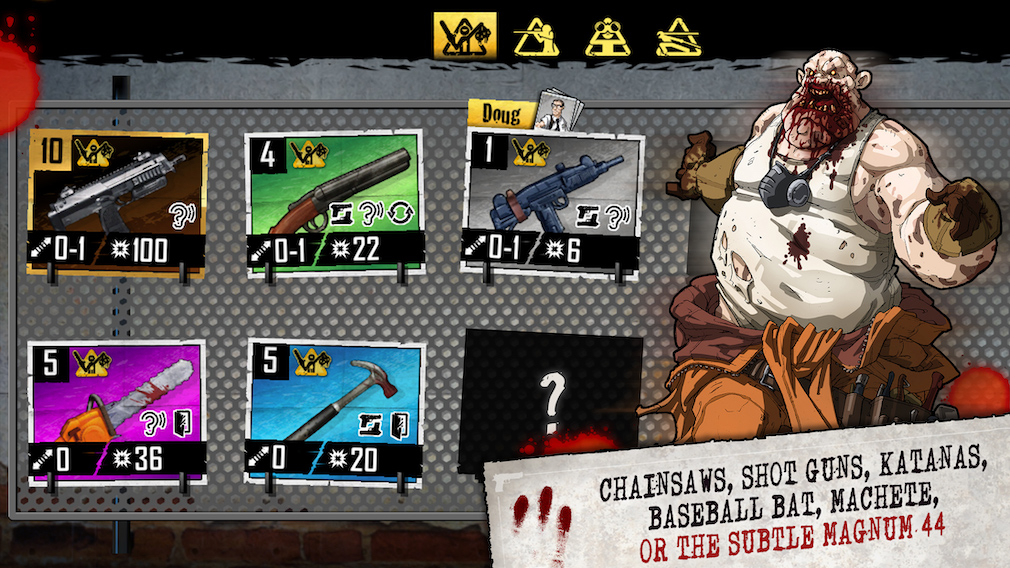 You do have to watch the danger meter, which is a good source of tension, forcing you to take risks to stay on top of the game. But with plenty of hit points to go around, most missions aren't in doubt. Those awkward ones just make you think about how the game would be better with a smoother difficulty curve.

Thankfully, then, Zombicide has some other fun ingredients to interest you. Success in missions earns you food, which you can spend upgrading characters and weapons. You'll also find new items in-game which you can distribute through your character's inventories.

This lets you tailor your team for the way you like to play. Characters have a specialty like the long-range Hunter or the high damage Assassin. So there's a bit more strategy in kitting them out to suit their skills. You'll get all the characters needed to beat the game for the asking price. A couple more are available as DLC but there's no real point in investing.

And even if scenarios are too easy, they're also varied. Some see you fighting your way through massed hordes of the dead, others have you securing supplies or rescuing survivors. The writing is sharp, if a little childish, and often funny although the in-scenario quips get repetitive. Between the lure of progressing through the plot and upgrading your stats, there's plenty to keep you playing.

It's also well-presented for a board game adaptation. You might miss those plastic zombies but instead, you get neon graphics, thumping sound and buckets of blood. The interface is neat and clear and you're introduced to the game in a jokey but effective step by step tutorial.

For all the undead around as we approach the apocalypse, Zomibicide is one that still seems to boast plenty of vitality. It's just a shame that most of the time it's haunted by a sense that a little more effort could have made it a whole lot better. Still, its mix of light strategy, stat-juggling and quirky humour should win it a decent and deserved fan base. There's life in this old corpse yet.

There's not that much strategy to this strategy game, but it has plenty of excitement, charm and variety to compensate
Next Up :
Evony: The King's Return review