I ain't afraid of no ghost

In Big in Japan, we take a look at a game that is currently topping the charts in Tokyo, to see what mobile gaming looks like across the pond (and then a few more ponds).

Next up in our look at what’s taking Japan by storm, is the mobile instalment in Level-5’s latest gaming phenomenon, Yo-Kai Watch. 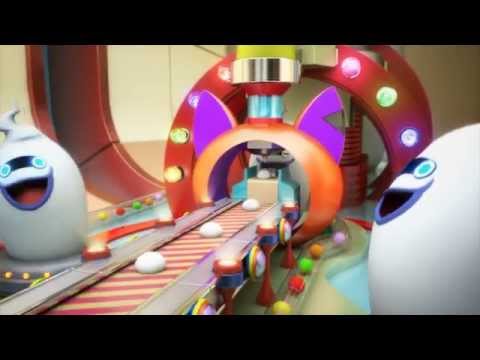 Now, if there’s one brand that deserves the title Big in Japan it’s Yo-Kai Watch. In fact, it wouldn’t be a stretch to say that there are few things bigger in Japan right now.

Yo-Kai Watch is the latest creation from the Japanese indie team behind Professor Layton. Beginning with the 2013 3DS game, the series follows the adventures of a boy named Keita (Nate in English), who ends up saving a ghost named Whisper.

In thanks, Whisper gives Keita a watch that enables him to see, and summon, all manner of spirits.

Much like Pokémon, the game centres around meeting all of the different spirits that lay hidden within everyday life. It even has its own mascot in the form of the loveable Ghost Cat Jibanyan.

However, there's more to this Japanese phenomenon than 3DS games. Nowadays there’s anime, manga, and collectibles. Such is the power of the franchise that the second Yo-Kai Watch movie recently outperformed Star Wars: The Force Awakens in the Japanese box office. 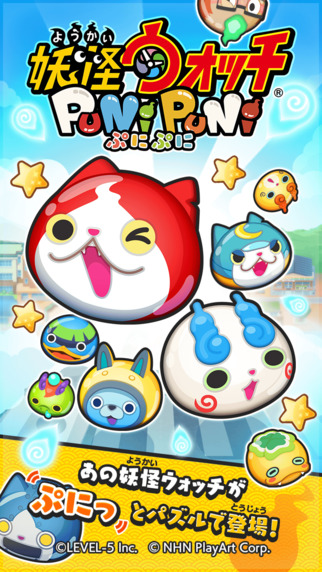 So, given the franchise’s phenomenal domestic success, alongside Level-5’s commitment to explore mobile platforms, it was only a matter of time before the game made its way to iOS and Android.

That game ended up being the recently released Yo-Kai Watch: Puni Puni (Puni Puni simply translates to "squishy squishy"). A game that has become just as popular as the brand it is based upon, remaining in the top grossing games chart since launch.

Yo-Kai Watch: Puni Puni isn’t just a mobile clone of what Level-5 has done on other platforms. No: it’s very much a game made for mobile platforms, employing mobile gameplay mechanics, whilst utilising the power of the brand.

This time round, the core battle gameplay focuses players on connecting up the randomly falling faces of their chosen Yo-Kai. Each of these attacks powers up both a special attack, and fever mode which allows all of your spirit friends to join together for an ultimate attack. 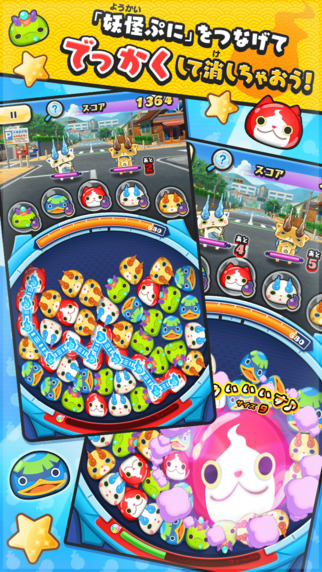 Progression is made on a map. Each stage features one battle, with players able to befriend the Yo-Kai and add it to their collection upon defeating it.

Players can also use the vending machine to receive a random Yo-Kai. This can be done either via an IAP, or via the generously earned in game currency. Furthermore, there’s also a regular drop of free special missions themed around both seasonal events, and those from the anime.

Each stage is short and bite-sized, giving the game an addictive feel. Unlike many free to play games with IAPs, Puni Puni also includes a very generous stamina system, meaning that you never feel like you’re being forced into coughing up your hard earned yen.

Yo-Kai Watch, and in turn Puni Puni’s success, is certainly impressive. However, it’s hardly a shock. Level-5 is well aware of what it takes to create a successful multi-platform franchise.

Yo-Kai Watch taps into so many aspects that speak to the Japanese culture and customs. It also has one of the most compelling worlds ever created, and Puni Puni plays off this in a way that means that players have constant access to that world. 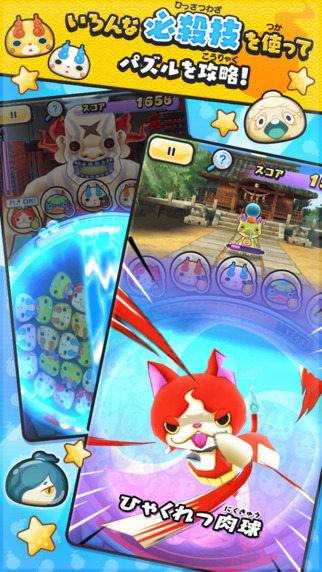 The Yo-Kai themselves are also inherently Japanese, with most originating from Japanese folklore.

On top of that, most have been given cute and appealing redesigns, whilst the story and their personalities have had a good amount of comedy injected into the proceedings.

It may be a franchise that appears to be geared to children, but it definitely has something for everyone.

So what are the chances of us getting this in the West? Well, very good to be honest. Despite the heavily Japanese setting and characters, Level-5 has committed to launching the brand in the West, with America recently seeing the release of the original 3DS title.

There will probably be a good amount of localisation changes, but it’s a fairly safe bet to assume that providing these launches are successful, Puni Puni’s global release won’t be far behind.

This is not only a game, but a franchise that you’ll definitely want to keep your eyes on going forward. As if Japan’s anything to go by, this could also take the world by storm.

[Update] Yo-kai Watch Wibble Wobble is a mobile spin-off to the famous 3DS franchise, out now