SuperPlanet has announced the official launch of Vahn's Quest, the studio's idle RPG on mobile. Both Android and iOS players all over the world can now get their hands on the colourful title as they embark on an adventure told through a comic book-esque style of narrative.

In Vahn's Quest, players can expect adorable characters to collect as well as fun mini-games to keep things spicy. The protagonist supposedly never dies and can only grow stronger as the game progresses, which means an "infinite growth" system that encourages players to keep at it and reap rewards even when they're logged off the game.

Players can also expect to earn Gold from the Gold Wagon, which will continuously produce this in-game currency that players can use to level up their heroes. They can also earn rubies from clearing quests and dungeons. Here, buff scrolls can prove incredibly useful for farming efficiency, which includes the Time Saving Buff, the Attack Buff and the Gold Boost Buff. 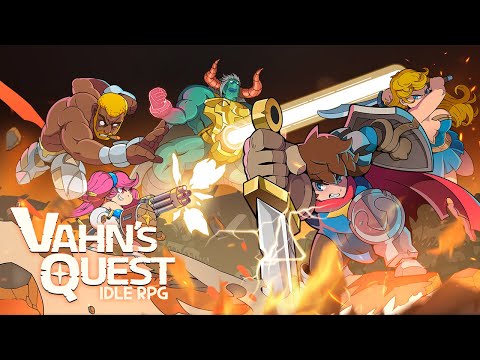 The game also features an equipment forging and enhancement system to make sure players are well-prepared to take on boss challenges and more.

If you're eager to join in on all the fun, you can download Vahn's Quest now on the Google Play Store for Android devices and on the iOS App Store. It's a free-to-play game with in-app purchases. You can also visit the official website to stay updated on all the latest developments, or take a little sneak peek at the embedded clip above to get a feel of the game's visuals and gameplay as well.

Are you on the hunt for more similar titles that will put your skills to the test on your mobile device? Why not take a gander at our list of the best idle Android games?

Next Up :
Hidden Through Time has launched two new DLCs - Aztec Rituals and Pirate Treasures - for the hidden object game

Vahn's Quest is an idle RPG from the makers of Sword Master Story, now open for pre-registration

Bound by Blades, an upcoming indie RPG, is preparing for a mobile launch next year

Before Your Eyes, the critically acclaimed emotional journey is now available on mobile via Netflix